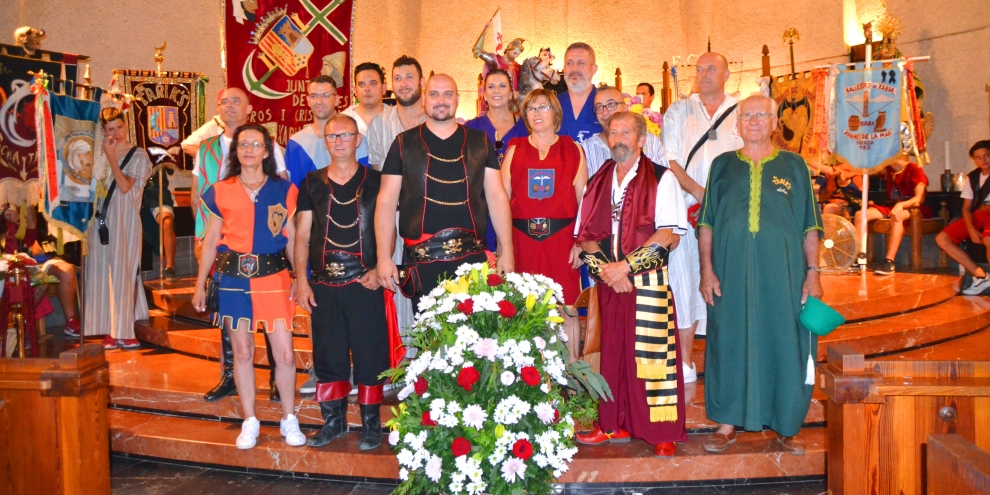 Although the fiesta is based in the port area, it does once move into the historic centre of Xàbia for a special flower offering at the niche of San Jaime.

The filaes gather in the Plaza de la Marina Alta – otherwise known as the ‘Post Office Square’ – on a warm Tuesday evening. From there, they parade in a fairly informal fashion down Avenida de Principe Asturias and through Placeta del Convent on their way to the narrow street of Carrer del Ravalet which has recently been renamed from Calle San Jaime – the street of Saint James.

Whilst getting to this point has been rather informal, now the filaes parade proudly down the street, welcomed by the residents who have already prepared a table of drinks and snacks. They gather at the eastern end where the niche is located to watch the flower offering made by the two standard bearers and the captain, cheered on by their parents filaes.

Afterwards there is an opportunity share some mistela, traditional coca maria and doughnuts offered by the residents of the street; everyone is welcome to take part and enjoy the food and drink so don’t stand on ceremony – there’s no better way to get to know others. Sometimes the bands break into a bit of spontaneous playing at the end of the street, prompting some spirited dancing from the companies which inevitably ends up with a slow march down the road, different units’ joining together with locked arms to either sway majestically like a Moor or march purposefully like a Christian.

As the week slides towards a conclusion, another offering of flowers is made to San Jaime, his image placed in the iconic church of Nuestra Señora de Loreto back in the port area of Xàbia. There is another procession -which starts under the archway in Calle Pio X, the filaes dressed in their colours alongside representatives from the town hall and other fiesta comissions. They process around the streets of the port, accompanied by the bands, taking the long route right back to where they started – almost.

Outside the church, each fila waits patiently to hand over their bouquets in a solemn offering of colour to this special saint. In recent years, the filaes have also made a donation of food to Caritas, a Catholic Church organisation which assists those in trouble, without any distinction, and these donations are handed over just outside the main doorway.

Entrance to the church is available to anyone so if you want to watch the proceedings, you can slide into the building through one of the several openings in its side – or indeed through the main door, although this will be largely occupied by the filaes. Be aware that the first few rows are normally reserved for the filaes themselves.

Each will make their offering and poses for photographs; the members of the town hall and the other fiesta comissions do the same. This is followed by a short blessing made by the priest.

On the same evening, the filaes gather together again for what will be one last organised community dinner together before the main events that bring the whole fiesta to a stunning conclusion. Normally held in Calle Sevilla, each fila brings along their own food and drink.

And as the clock ticks past midnight, they enjoy a disco, even some karaoke, until the early hours. The wisest may slip off early for tomorrow brings a special day; it brings invasion!

<< The Music and the Arenal

SANT JAIME – ‘MATAMOROS’
One of the twelve Apostles of Jesus, Jaime was beheaded by King Herod Agrippa I in 44 CE and legend claims that his body was taken up by angels and taken to Iria Flavia in Iberia (modern-day Padrón in Galicia, north-western Spain) where a massive rock closed around his relics. Tradition states that he miraculously appeared to fight alongside Christian forces during the legendary Battle of Clavijo (844 CE), a clash in which the vastly out-numbered Christians defeated the Muslim forces of the Emir of Córdoba, and thus he became known as ‘Santiago Matamoros’ – St. James the Moor-slayer – whilst “Santiago y cierra España!” (“St. James and strike for Spain”) has become the traditional battle cry of Spanish armies.