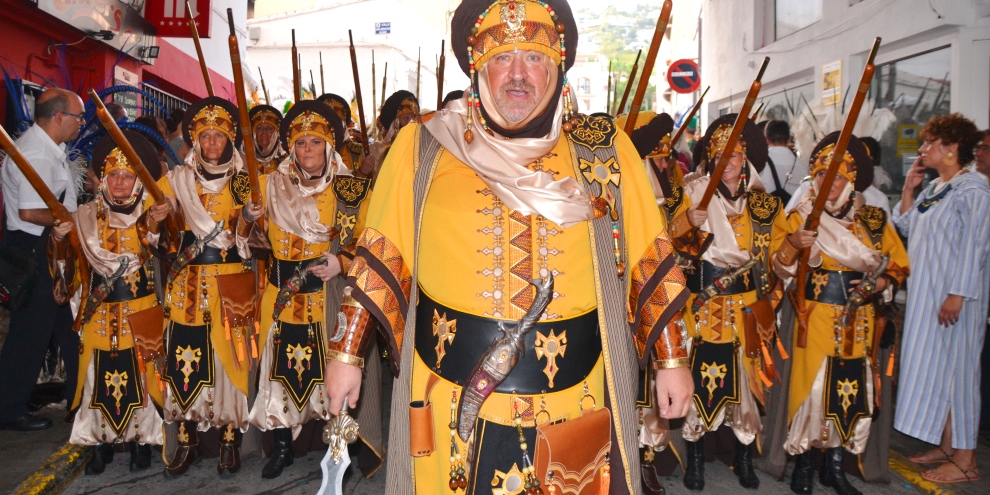 Whilst the colourful fiestas of the Moors and Christians, which is celebrated mainly in the southern Valencian region, serve primarily as a reminder of a period of history when much of Spain was under the control of Muslim powers, they also recall the daily struggle against Muslim Barbary pirates who prowled the Mediterranean coast between the 15th and 17th centuries. Indeed, the village of Jávea was once a walled stronghold to protect its citizens against such marauders, tall defences that were only removed in the mid-19th century once the danger has passed.

In essence, the fiesta celebrates the success of the “Reconquista”, the ultimate triumph of Christian forces over who were considered as Islamic invaders in 1492, and the strengthening of the Christian faith, whilst also acknowledging the culture that controlled much of Spain for over 780 years. (See box below for a potted history.)

The roots of the Moors & Christians stretch back more than 500 years, beyond the success of the “Reconquista” and in some areas have developed from older traditions over 800 years old. Almost exclusive to the southern areas of the Comunidad Valenciana, the biggest event takes place in Alcoy around the feast of San Jorge (St. George) in late April / early May, celebrations which were declared a ‘Fiesta of International Tourist Interest’ in 1980. According to legend, Jaime I of Aragon – el conquistador – had reconquered the city but Muslim forces had launched an offensive to try and recover it. As the two armies faced off, San Jorge appeared and the frightened Moors scattered in defeat.

Other renowned Moors & Christians events include that of Bocairent each February, Villena (where almost a third of its population participate!), Oliva, Ontinyent and Concentaina, which is one of most ancient festivals dating back to at least 1586. And in 2022, the fiestas of Dénia were declared a ‘Fiesta of Regional Tourist Interest’ by Turisme Comunitat Valenciana.

St James (San Jaime or Santiago) often plays an important part in these festivities. He was said that to have appreared alongside Christian troops during battles against Islamic forces, particularly at the decisive Battle of Las Navas de Tolosa in July 1212 which was an important turning point in the medieval history of Spain. He became known as ‘Matamoros’ – the Moorslayer – and he remains Spain’s patron saint. The feast day of San Jaime is July 25th so some festivals, like that of Jávea, take place during this month.

Each town has its own peculiarities but in general the fiesta is celebrated is very much the same way. The participants split themselves into the Moors and the Christians. These two sides are then split into components known as ‘filaes‘ (which means ‘rows’) which are funded entirely by membership fees and the fund-raising efforts of its members, usually through selling national lottery tickets for which the ‘fila’ receives a commission.

The cost and thus commitment can be incredible; those in Alcoy can expected to pay around 1,500 euros per year to be part of a fila; most of those in Jávea contribute considerably less but it’s still a huge financial responsibility. Membership is a year-long commitment, raising funds, organising banquets and planning the activities that will make up this fiesta. You become part of a special family, working together to make the next parade even better.

Each company creates its own base of operations known as ‘kábilas‘ if you’re a Moorish fila, or ‘cuarteles‘ (barracks) if you’re Christian. Like the penya casals of Sant Joan, most are these headquarters are temporary affairs, the company members renting a vacant premises for a week or so, although most rent the same space year after year. Those well-established ‘filas’ have more permanent bases with bars and fully-equipped kitchens, the walls decorated with photos from previous events.

In February each year, the ‘filas’ come together for the first time since the previous summer’s extravaganza on a special day known as Mig Any, which marks the midway point – the “half year” – between fiestas. This is the formal beginning of the year’s festivities during which the captain fila on the previous year hands over responsibility to the next.

The day is fairly informal. During the morning, the filaes gather together to enjoy a communal brunch of seafood and copious amounts of local wine (and maybe something stronger) before making a short informal parade through the streets of the port. There are no extravagant costumes or make-up, just the casual wear that each fila has chosen as their informal uniform.

In the afternoon, the filaes make their way to Salones Carrasco for the formal part of the day, the gala lunch and presentations. The mayor attends along with the councillor responsible for Fiestas and representatives from the commissions of other fiestas. The outgoing captain and standard bearers give their emotional farewell speeches and are presented with momentoes of their year as the main representatives of the fiesta. And with a loud cheer from their parent filaes, the new captain and standard bearers take their place. The days extends long into the evening, the different sides joining together for their respective marches before disappearing into the night, aware that wheels are now turning to prepare for July.

The filaes have been preparing for their special week for many months. Costumes and make-up were selected long ago, rented from specialist businesses across the region. For those without a permanent home in the port, arrangements have been made with landlords and property owners; in other cases, portakabins have been booked and then, in the few days before the start of festivities, they’ve been placed in their respective areas. Fridges are switched on then filled with food and drink. Tables and chair wiped clean. Uniforms dragged out of wardrobes and made ready. And the excitement builds.

A POTTED HISTORY
The land that the Berber soldiers from North Africa invaded in 711 was a Christian Visigothic kingdom and the remnants of the defeated would give birth to the Kingdom of Asturias, whose founder Pelayo is credited with kick-starting the Reconquista after defeating Muslim forces at the Battle of Covadonga. After conquering much of the Iberian peninsula, internal disputes and civil wars across the Islamic state of Al-Andalus fragmented it into a number of minor states and principalities, allowing Christian kingdoms in the north to gradually overpower their Muslim neighbours in the south. By the end of the 11th century, Al-Andalus was in decline and with the fall of Córdoba in 1236, the Emirate of Granada was the only Muslim territory left. On January 2nd 1492, Emir Muhammad XII surrendered the Emirate to Ferdinand II of Aragón and Isabella I of Castille, the ‘Catholic Monarchs’.