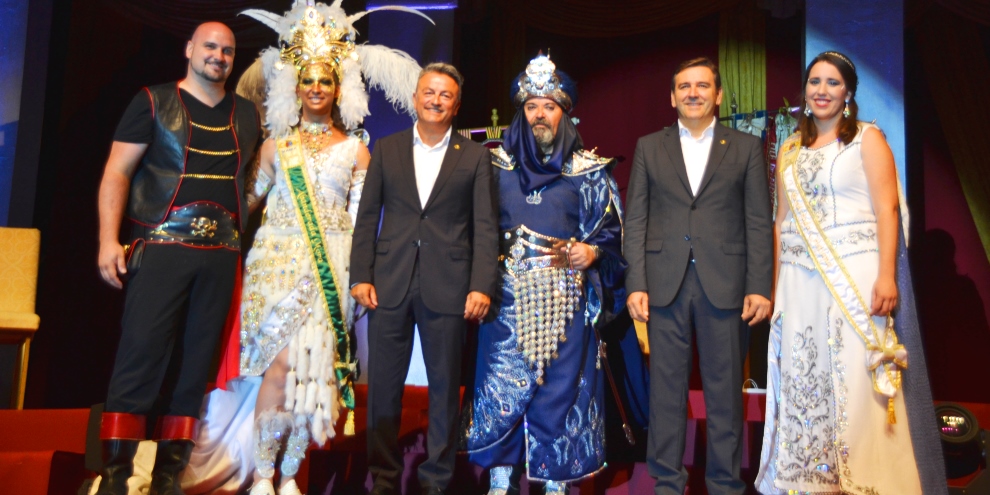 Like all big fiestas, the festivities of the Moors & Christians open with the ubiquitous inauguration, a long drawn-out evening of speeches and presentations that test the patience of the most enduring of characters.

As the sun drops towards the horizon, a procession passes through the port collecting representatives of each of the filaes who are wearing the costumes that will be worn during the gala parades the following weekend. These costumes will have been selected many months earlier and rented from specialists companies across the region. During the afternoon, the fila will have gathered together to prepare their representatives and show off their costumes which have been kept under wraps until this very day. When all the representatives have been collected, they gather together for a short reception at the base of the year’s captain filà and a much-needed refreshing drink.

In the heart of the port in Avenida Jaime I, a decorated stage has been constructed in the centre of the port with many rows of white plastic chairs in front of it. Be aware that the first dozen or so rows are reserved from the officials, visiting dignatories and members of the filaes; it’s the ultimate ‘first-come, first-served’ bun fight as the hour of the presentation approaches.

What follows is almost two hours of bum-numbing speeches and set-pieces. Each fila is presented with their standard and their representative (or two). The official business is interspersed with dance numbers, speeches from the president of the organising committee and officials from the town hall, normally the mayor and the councillor responsible for Fiestas, and the presentation of the Sant Jaime Prizes, normally given to those who have made outstanding contributions to the fiesta, for example.

Most of the ceremony is presided over by the outgoing Captain who is seated on the stage at the back who will be replaced during the evening’s proceedings by the incoming. Captaincy switches between the sides, Moors and Christians.

In 2020, it was the turn of the Christian Filà Ballesters to provide the captain and they were to be accompanied by two ‘abanderadas’ – two young ladies who act as the standard-bearers, accompanying the half-crescent of the Moors and the cross of the Christians – from Moorish Fila Xibia and Christian Fila Pirates de Sant Jaume. But due to the COVID-19 health crisis forcing the cancellation of the 2020 festivities, they will be carrying their responsibilities over to 2021.

As the presentation draws to a close, representatives from other fiestas welcome the new captain and the standard bearers; these include those from the Fogueres de Sant Joan, Jesús Nazareno and Mare de Deu de Loreto (port fiesta), amongst others.

After the formal presentation, the filaes gather together in the same location to enjoy a communal dinner together before a disco belts out the classic fiesta songs and Moors & Christians marches as well as some of the latest tunes until the early hours.

The Music and the Arenal >>