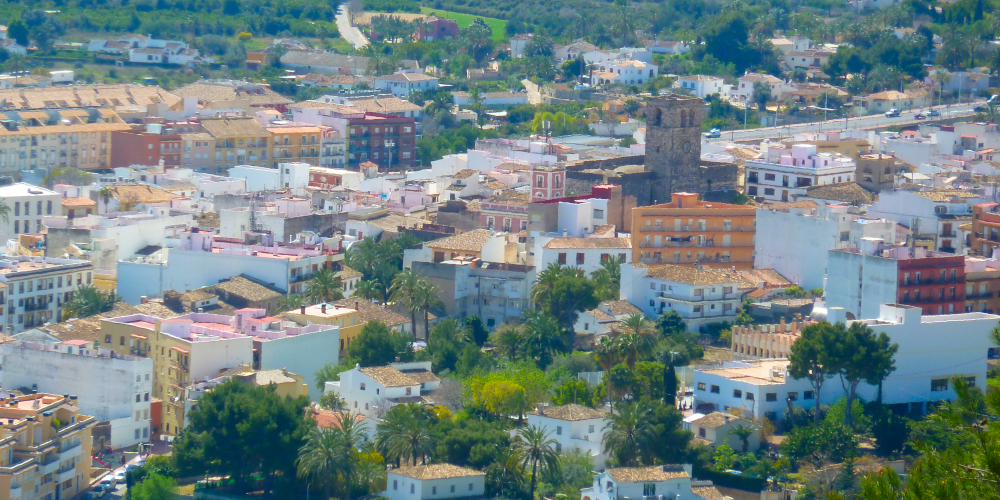 Xàbia is a wonderful place to explore. Its beaches are renowned for their beauty, the waters for their snorkeling and diving opportunities. The headlands and natural parks offer stunning opportunities to walk through nature and enjoy superb views whilst our mountain on Montgó, looming up above us to the north, providing a protective boom from the savage northern winds, is always worth a climb. And, of course, Xàbia has its history stretching back many centuries through medieval, Moorish and Roman times and beyond.

But there are many other places to visit, sights that might not necessarily be well-known or obvious to both the residents and the visitor, other history to learn which might explain such queries as to why the town doesn’t have a railway, for example, or when a poor donkey was bombed by the Italians .

We call this ‘Hidden Xàbia’.

If Only Trees Could Talk

Sometime between 800 and 1,000 years ago, a tree was planted under the watching eye of the majestic mountain of Montgó, its steep southern cliffs providing protection against the savage northern winds.  No-one knows exactly who planted it, although it was most probably a Moorish farmer who found the fertile soil and warm climate perfect for cultivating olives to make the much-loved and delicious oil from its fruit.

The Night of the Abyss

Once hidden amongst trees just a few hundred metres from the mountain road linking Xàbia and Dénia, a tall stone cross marks the location of a macabre tale in the modern history of the region: the story that became known as “The Night of the Abyss”.

The fire of September 2014 devastated the plateau of La Plana, stripping it of much of the tree cover that provided welcome shade to visitors exploring this wide flat plain. However, two old stone structures were exposed, the remains of the lime kilns which were used to extract quicklime which would be then used in the construction of local buildings.

The Holy Caves of Sant Antoni

On the very end of the headland of Cap de Sant Antoni, just below the lighthouse, lie several caves known as ‘Les Coves Santes’ – the Holy Caves. They can’t be seen from the beach area, only from the sea, and to reach them is a challenge to those who might suffer from a fear of heights since they are clinging to the walls above the sea and the path does the same with ropes placed to assist.

El Fielato was located next to the Gata bridge which crossed a now-covered ravine at a point which is now the beginning of Calle Dr. Borrull. On the right, as you entered the village, it was effectively a tax office that charged merchants and producers on their wares before they entered.

Conquest chapels are so named because they were built during a time when Christian settlers moved down from the north after the conquest of the Valencian lands in the first half of the 13th century, pushing the existing Moorish population into the dark valleys and mountains inland and building their own places of worship.

When The Town Was Defended by Rocks

War arrived in Xàbia in 1812 when French troops swept south after the fall of the city of Valencia and occupied Dénia before driving on towards Alicante, taking Jávea, Teulada and Calp. Then surrounded by high walls, Jávea resisted for a while, assisted by the emergence of the ‘guerrilla fighter’, but couldn’t hold out for long before the French troops managed to force their way into the town to be faced by an unlikely last stand.

When Pirates Roamed the Sea

Every summer, the port of Xàbia is filled with vibrant colours and deafening noise as the town celebrates its annual ‘Moors & Christians’ fiesta. Whilst the fiesta essentially reminds us of the Muslim invasion of the Iberian peninsula, they are also a hint of a terrible danger that the people who lived so close to the sea had to endure in their daily lives: the threat of the pirates.

In the 1920s, one of Xàbia’s most striking architectural pieces was created, a neo-Gothic villa with pointed doors, windows, small round towers, battlements and a high round tower with arrow slits and pointed roof reaching high up into the blue sky.

A Story of Love Set in Stone

There is a romantic tale that is forever set in stone, a story of forbidden love between two young people, one from Xàbia and one from Dénia. It’s a little known legend rooted in the mists of time but is these days clearly on view to anyone passing along the northern flanks of the grand headland of San Antonio, either by sea or on foot. It is the story of Melcior i Gràcia.

The Day the Italians Bombed a Donkey

In 1937, an airfield was created on flat agricultural plots just inland from the Arenal beach which formed part of a grand Republican defensive line stretching from Cap de Sant Antoni to Portitxol. On the morning of 23rd July 1938, it was attacked from the air by Italian allies of the Nationalist rebels with a devastating result for one poor donkey.

How A Shot Heard Around the World Stopped a Railway

Once upon a time, there was a real effort to link Xàbia to the rail network. And then came an angry young Serbian called Gavrilo Princep who fired a shot that was heard around the world. This is the story of why our town remains isolated from the rail network, despite efforts to forge a link with the rest of the world.

The Story of the Wicked Stepmother

One of Xàbia’s most famous stories is the murder of five-year-old Bartolomé Sendra by his stepmother Úrsula Tachó in 1920 which has become etched into the collective memory of the town. Here we have written an abridged version of events as told by author Bernat Capó in his book “La Criminala” published in 1986, with additional information from “La Casa de la Criminala” by Erika Reuss Galindo.

The shelter that turned out to be a torpedo store

A structure located right by the fishing port and built during the civil war has, until now, been considered to be a shelter to protect the population during bombing. However, it is now suggested that it was a space dedicated to the storage of torpedoes used for torpedo launchers.

The signs of quarrying are obvious along the coast between the port and the Arenal zone. Mother Nature doesn’t leave so sharp a surface, so precise an angle. During winter storms, the waves crash onto the coast, the water pouring over the rock and the artificial basins fill with water.

There is a small promontory known as “Morro de la Creueta”, some 300m along the coast towards the end of the headland. In 1898, it was chosen as the most appropriate place for the installation of a “tangó”, a horizontal iron pole similar to the bowsprit of a boat, which extended from the rocks some six metres above the sea.