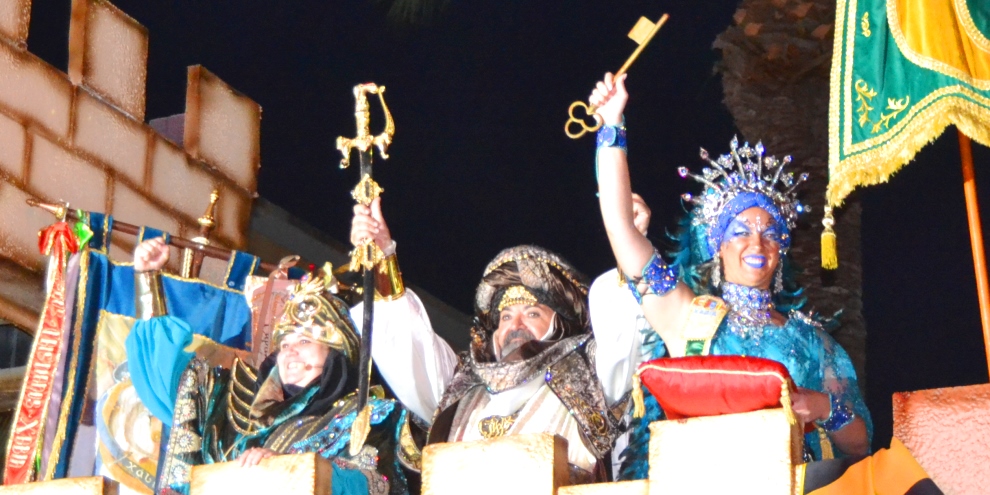 A little over 1,300 years ago, Täriq ibn Ziyad led an army across the the narrow strait between Africa and Europe. He landed at the foot of a mountain which would be named after him: Jabal Tariq – Gibraltar. Some 7,000 Moorish troops faced 100,000 Christian Visigoth soldiers of Hispania led by King Roderic at the Battle of Guadalete and triumphed, opening the door for the Umayyad conquest and some 780 years of Islamic influence in the Iberian peninsula.

La Grava beach in the port becomes the frontier of Europe for just one spectacular evening of great colour and deafening noise that shatters the relative peace in the port. Don’t expect a David Lean epic with hordes of blood-thirsty Muslim warriors sweeping up the pebble beach for the landing is merely symbolic.

The beach is cleared of people, sunbeds and parasols an hour or so before the action. Get there fairly early if you want to secure a sitting spot on the sea wall; it really is a bun fight for the best spot to watch the action. Also consider bringing along some ear plugs, especially for the kids, as the explosions can be quite loud.

Out in the bay off the beach, traditional boats will make several passes, cheering as they do whilst the Christian forces jeer from the beach. Eventually some of the occupants will leap into the water and make that symbolic landing; other Moors will have already gathered on the pebble beach at one end and will welcome them with cheers, handshakes and perhaps a towel.

A thunderous exchange of gunfire ensures. You might be showered by remnants of the gunpowder which is blasted out of the wide muzzle of the guns. Gradually, in a choreographed move, the Christian troops are pushed back towards the castle where the Captain and the standard-bearer take position on its battlements.

The filaes will sit on opposite sides of square and they will encourage their respective ambassadors who will engage in lengthy negotiations, exchanging various pleasantries with gusto. Sparks may fly as professional performers work through millimetre-perfect routines with razor-sharp blades before the final battle sees the Muslim invaders victorious.

The Christian Captain will leave the safety of the castle, whose key will be laying on a red cushion carried by the standard-bearer. It is exchanged for their lives; the Muslim ambassador leads his standard bearer into the castle and onto the battlements; sometimes the Christian flag is flung from them. To great applause from the Moorish filaes, Xàbia has become Muslim.

Familiar marches fill the air as the filaes take part in a short parade to leave the scene; the Moors sway proudly, leading away the victorious ambassador whilst the Christians bounce quickly along the street, already making plans for re-taking the castle.