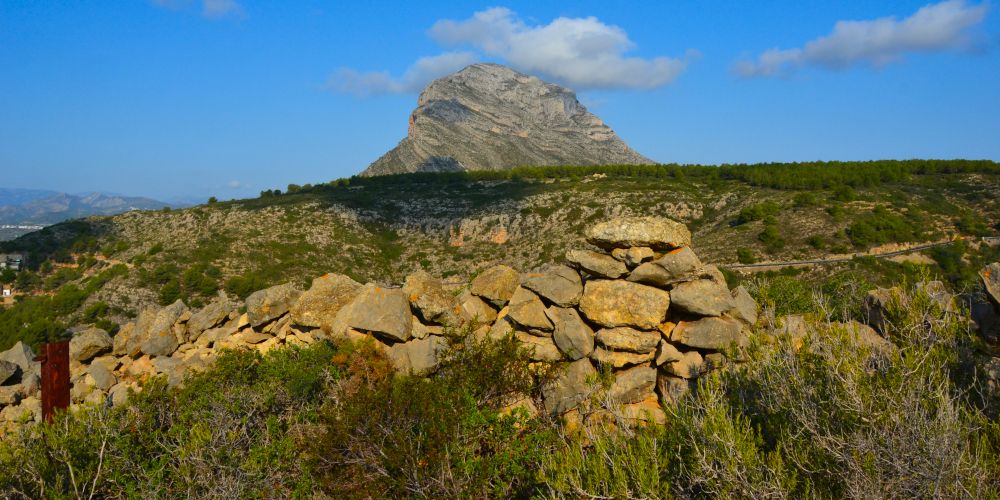 Both badly affected by devastating fires in the past few years, the two natural parks have shown their resilience by getting on the road to recovery quickly so that we still have these magnificent open spaces to enjoy.

The Parque Natural del Montgó offers not just the chance to scale the magnificent mountain but also to enjoy the flat plateau and discover the ancient quarries of the sea cave.

The Parque Forestal de la Granadella is a wonderful open space for walking and horse-riding.

The Parque Natural del Montgó was created in 1987 and encompasses some 2150 hectares of natural landscape around the 753 metre high mountain of Montgó. It has an extraordinary wealth of flora and fauna as well as some important archaeological sites dating back many thousands of years. The plateau provides a great option to escape the hustle and bustle of the coast during the busier summer months with a number of walks for all ages and abilities, a recreation zone to enjoy a picnic and a stunning viewpoint from which to admire the bay of Xàbia and beyond.

There is a visitor centre on the Dénia side of the mountain about a 20 minutes drive from Xàbia. To get there, head over the plateau via the CV-736 – known as the “mountain road” – and continue down into Dénia. At the second main roundabout, take third exit into Avenida Joan Fuster, a dual carriageway that becomes single lane when it runs alongside the railway lines. After about 500m, turn left into Camí de Sant Joan and there is a car park to the left next to the entrance to the visitor centre.

The centre has exhibits explaining the role of the natural park as well as the Cabo de San Antonio Marine Reserve with audioguides in five languages.

Understandably the mountain of Montgó dominates the area, the last spur of the Cordillera Prebética system of mountain ranges that runs across southern Spain from Andalusia. From the Xàbia valley it is said to resemble the head and trunk of an elephant complete with an all-seeing eye created by a huge cavity. The mountain acts as a huge barrier against the colder northern air so Xàbia is often a lot warmer than many places in the region during the winter months.

There are a number of routes to its 753m high summit of which the most common is the route up the eastern face from La Plana de Justa which we have described here.

There is also a longer, much tougher route from Jesús Pobre which runs on and alongside the long ridge of the mountain and a popular walk links the two and is known as the Montgó Traverse. In the summer there is often a night hike covering this traverese organised by the town hall with local climbing clubs.

The “eye” of Montgó can also be reached by a steep and narrow path which becomes more of a scramble at times and is often considered a tougher challenge than the summit; click here for a decription of the route. But the rewards are high which great views across the valley of Xàbia as well as the chance to explore the dusty caves which extend into the mountain; take a torch and some protective clothing.

For those who want to get close to Montgó but don’t actually want to climb this majestic mountain, there is a nice largely flat circular walk of some 4 kilometres across the plateau known as La Plana de Justa which follows the wide forestry tracks and touches the start of the narrow path to the summit. It’s a great option for all the family to enjoy the relative tranquility of this natural area.

One of the few places that largely escaped the flames of the inferno of 2014 was the recreation area which is located just ten minutes drive from the town on the road to the lighthouse at the end of the San Antonio headland.

There is a small car-park beyond which there is a circular stone seating area with a fountain providing cooling drinkable waer in the centre. Through a gap in the wall there are a number of wooden benches and tables shaded by the trees that remain which provides a perfect safe place for a family picnic and consequently is very popular in the summer.

From the picnic area there is a wide path that leads across the rocky terrain to the very edge of the steep northern cliffs of the headland which provides stunning views towards Dénia and across the wide bay of Valencia.

A wide track also leads across the plateau from the car-park and one of the results of the 2014 fire was the re-discovery of traditional lime kilns, one of which is just a few minutes walk along the track, the Forn de Calc de les Faroleres de Xàbia. There is another kiln on the other side of the road from the car-park, a few minutes walk along the signposted path and from here there are great views down into the bay of Xàbia.

At the end of the headland there is the lighthouse and the viewpoint of Cap de Sant Antoni which offers fantastic views over the bay of Xàbia. The lighthouse was built at the end of the 19th century and is now fully-automated. Its associated buildings have long been disused but there are proposals in the advanced stage to turn them into a visitor centre for the natural park and the marine reserve that surrounds it. One can walk with care to the very edge of the headland to the right of the lighthouse.

This seacave has been a popular destination to visit for hundreds of years and even attracted royalty when Felipe III made several trips at the end of the 16th century. It can be reached by a steep path from the main lighthouse road and we have a great route which also takes in the old watchtower of Torre del Gerro here or you can take an easier and shorter route from Les Rotes on the Dénia side of the headland.

In truth it’s more than just a sea cave but is also an old quarry from which huge blocks of tosca stone were hewn from its walls to provide the building material in both Xàbia and Dénia. Indeed the walls of the ancient church of San Bartolomé in the heart of Xàbia’s historic centre were quite likely extracted from here.

You’ll need a good torch to explore the tunnels that extend deep into the heart of the headland and appreciate the back-breaking work carried out in candlelight to quarry these blocks. The cave can also be approached from the sea but in the face of saturation the authorities have imposed restrictions to protect as much as possible this important historical site.

The Parque Forestal de la Granadella is some 700 hectares of natural landscape to the south which have long been described as the green lung of Alicante. Sadly much of it was destroyed in a devastating fire in September 2016 but the road to recovery has been fairly swift and it is still a great place to explore.

One of the best ways to explore this fascinating natural zone is to walk the official trail which, at almost 14 kilometres in length, is the second longest route in the network of walks in Xàbia. The route passes through several key locations such as the 18th century watchtower of Granadella, the Mirador Llevant viewpoint which offers stunning views along the steep cliffs to the south towards Moraira and the Granadella ridge overlooking the valley of Xàbia.

We describe this route here.

The small pebble beach in Granadella cove has long been considered one of the most beautiful in Spain, toppng various polls in recent years to make it one of the most popular beaches in Xàbia. Consequently there has been great strain put on its infrastructure, so much so that, from 2017, the local council banned vehicular access during the summer months, providing a shuttle service from a special car-park at the start of the winding narrow road down into this sheltered cove.

Due to safety concerns about flash flooding, parking has been prohibited in the dry river bed since 2017 by the regional authorities and, despite the local council creating new zones to leave cars, parking is now extremely limited. However, despite the restrictions, it remains popular with residents and visitors alike for its clear waters perfect for diving and snorkelling and for its two quality restaurants serving some of the best seafood in the region.

One of the popular short and exciting walks leave the cove to the ruins of the castle of La Granadella which sit at the end of the headland known as ‘Morro Castell’.

It’s a relatively short walk of just three kilometres but not one for the faint-hearted with steep climbs and descents as well as traverses along steep sections aided by chains fixed to the wall. But the effort is worth it to see what remains of one of the last watchtowers to be built along the coast, destroyed by British forces during the Peninsular War to ensure that it couldn’t be used by French troops.

Xàbia has a network of official viewpoints but Mirador Llevant doesn’t appear amongst them and this is probably down to its relative inaccessibility since it can’t be reached by car and requires a great deal of leg work to reach it. But, as always, the effort is worth it as it provides stunning views along the coast, the steep cliffs dropping dramatically into the water just metres away.

One can link the watchtower and this viewpoint is a short six kilometre walk which we have called “The Granadella Coastal Loop” and have described here.

The Hípica Cañada del Sol offers the chance to explore much of the Granadella zone on horse back. It is located on the edge of the Urbanización Cumbre del Sol and is open Tuesday to Sunday from 9.00am to 2.00pm and then 5.00pm until 10.00pm. There is also a bar-restaurant, riding school facilities and a small farm to allow children to get to know the animals. The centre is reached via the village of Benitatxell and is about a twenty minute drive from Xàbia. head towards Benitatxell along the CV-740 and turn left at the second set of traffic lights as you enter the village. Follow the road as it climbs steeply up the side of the Puig de Llorença to the Urbanización Cumbre del Sol. On entering the urbanization, follow signs for [HIPICA-BAR] to the riding school.

OTHER PLACES TO VISIT NEARBY

Devastated by the fire of 2016 this popular area has refused to give up and remains a popular area for families and includes picnic areas with barbecue zones (when conditions permit), a children’s play area and a bar with facilities.

The park has been revitalised after the flames by local tree surgeon Miguel Ángel Miguel García who has transformed many of the tree stumps into fantastic natural statues of animals, birds and plants with the blessing of the local council.