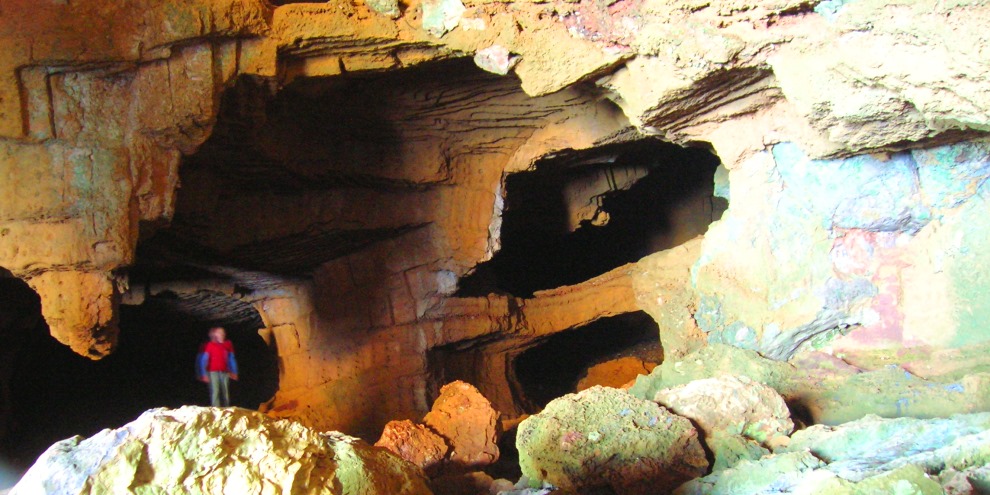 This is a deceptively tough walk which demands absolute respect. However, it is well within the capability of anyone with a bit of drive and determination as well as a good head for heights. It starts at the Monastery of Nuestra Senora de los Angeles situated on the high plain of La Plana de Sant Jeroni and crosses the rugged heathland northwards before dropping spectacularly into the deep ravine of the Barranc de la Cova Tallada and down to La Cova Tallada itself at the water’s edge. The walk then edges along the coast to the Barranc de l’Aiguadolç and climbs to the magnificent Torre del Gerro before heading back across the heathland to the start-point.

With your back to the monastery, turn left and walk back along the main road for some 350m to the Camí de la Plana de Sant Jeroni , a rough wide track on the right-hand side with an obvious signpost that points the way to the Cala Tallada.

The main track loops around houses for about 600m; avoid the temptation to leave this route and if you are unsure of the right route, look out for the white-and-yellow route markers that are painted at various intervals on tree trunks, large boulders and the occasional junction box to guide the way. The track eventually arrives at a path hub, a mass of rough narrow pathways that lead off in several directions. Again, the route to the cave is clearly marked by a short post with the familiar white-and-yellow lines and passes through a line of trees before weaving across the rough heathland.

The path is clear as it passes through clumps of lavender and dwarf palm but can be quite rough underfoot and, as you around the head of the Barranc de la Foradada, a deep ravine in which evidence of human occupation some 80,000 years ago has been found, the temptation to enjoy the views opening up around you could prove painful. The engaging Lakeland author A.W. Wainwright once warned readers “to avoid accidents and always watch where you are putting your feet” and large rocks poke through the ground, coaxing a twisted knee or a turned ankle and so, despite the unveiling of superb views around you, some attention has to be given to the ground below your feet to avoid an unfortunate mishap.

Eventually the path begins a steep descent towards the Barranc de la Cova Tallada and you need to carefully pick your way through exposed boulders until the path disappears quite suddenly over a sharp ledge. At first the climb down is fairly simple but becomes a little trickier so the descent has been assisted by a thick metal chain which has been anchored securely (or so we hope) to the rock. There’s no real skill required to get yourself down this section but it might test those with a nervous disposition towards heights for the ground falls away steeply into the ravine at the bottom.

The path winds its way roughly down the southern flank of the deep ravine; you may well find yourselves using some very unorthodox methods to negotiate the trickier sections but it’s a case of whatever works to get yourself over the last few hundred metres to the bottom and the very edge of the Mediterranean. A signpost marks the location of La Cova Tallada, the entrance to which lies at the water’s edge a few metres below and reached by negotiating a short but tricky descent to the right which demands concentration and a bit of nerve and flexibility followed by a stretch of easy scrambling along the water’s edge to an obvious entrance to the cave, a tall cut in the cliff-face which gives no hint of what lies beyond.

The sea cave and ancient quarry of La Cova Tallada has long been considered one of the most spectacular places to visit in the province of Alicante and has attracted curious visitors for centuries, not least the Spanish King Felipe III who made several trips at the end of the 16th century.

After ducking below the low ceiling of the cave, an enormous chamber opens up around you. A huge gash in the cliff-face exposes the cavern to the sea through which waves no doubt crash during stormy weather. Picking yourself around a huge sandstone block that appears to have been dislodged from the high ceiling many metres above you, you will find the ancient quarry, a most peculiar mine that extends deep into the darkness which can only be explored further by the use of a torch.

The evidence of human excavation is overwhelming and stone blocks hewn from the walls were used for construction in both Jávea and Dénia. Carved arches connect the quarry to the sea and a relatively short basin protected by a natural barrier of rock. Local legend claims that this basin was used as a hideaway and supply point for German submarines during the Second World War but there is no evidence to confirm this. The removal of a huge amount of stone has hollowed out large caverns which extend deep into the cliffs and these can be explored with the use of a good torch. It really is worth the effort to experience a quarry where men endured back-breaking work in candle-light to entice huge blocks of tosca stone from the walls.

There is always a temptation to spend far too much time exploring the depths of Cova Tallada but we’re only half-way around the route and the way on lies along a rocky path which clings to the slopes just above the water’s edge. The single tower of Torre del Gerro can be seen high up on the clifftop ahead. It seems so close but there’s a good deal of walking and scrambling to come. The walking is fairly easy for much of the time as this is the main route to the cave from Les Rotes and Dénia. But there is one short section across a smooth slab of rock which might prove a little daunting for some, despite the recent installation of a long rope to help add a little bit of security.

After about 500m, the path follows the cliff edge as it bends into the mouth of the Barranc de l’Aiguadolç which drops steeply down from the plateau. Climbing up the other side of the gorge is a set of steps which can be climbed quite easily although it is quite close to the edge of what appears to be a large cavern developing in the cliff-face, recent erosion quite obvious. At the top of the steps, another handy rope assists along a short traverse across the top of this growing chasm and in recent times there has been some repair work by the park rangers to make this little section a little safer for walkers.

At the far end, there is a small wooden sign which warns of a dangerous path ahead; a similar sign appears to be missing from the other end! Just around the corner there is a small bluff onto which you can walk and take some stunning photos back along the coast towards Cova Tallada and the headland of Cabo de San Antonio. Just beyond you take a set of concrete steps up to the wide track of Calle Vía Lactea; you are now on the very edge of Dénia.

Following the wide track uphill, you’ll reach a junction. Take the option to the right and you’ll make your way into Les Rotes and beyond to Dénia. But the route heads left uphill and the wide track curves around to end abruptly just around a small bluff at the top of which stands the tower. The temptation for the more agile is to scale the small ridge to the tower; to do so would go against everything that the natural park service is trying to achieve in protecting the local habitat so it is preferred that you continue along the narrow track that skirts around the edge of the gorge, crosses a section of loose rock and then bends around to climb gently up to the Torre del Gerro, although there are few hidden surprises to test the nerve in the final few metres.

The Torre del Gerro is a 16th century watchtower which formed part of an early warning defensive system against marauding Barbary pirates which terrorised the coastal areas for several hundred years. Its unique shape gave it the name “Gerro” which means ‘pitcher’ or ‘tankard´in the local Valenciano language, although it looks more like a large bottle. On the seaward side of the tower can be made out the coat of arms of Carlos V, the Holy Roman Emperor. Those with a penchance for scaling almost impregnable walls can gain access to the tower by climbing to the entrance door some three metres up the southern flank of the tower.

Indicated by the yellow PR-CV 355 signpost, the route makes it way back towards Javea, a rough path climbing steadily through the undergrowth alongside the deep ravine of the Barranc de Malonda across which Denia’s infamous “ghost town”, an abandoned urbanisation, sits quietly with the huge hulk of Montgó looming behind. The path winds gently for about 1400m until it reaches a small ruin and a wide open space.

The route continues along a wide track to the right for about 750m, passing a number of houses and the Sant Jeroni shooting range until returning once again to main road of Carretera del Can de Sant Antoni.

To complete the circular route, turn left and follow the road for about a kilometre to return to the parking area next to the monastery.

Just 200m down the road is Restaurante Amanecer which might be a perfect place to stop for lunch and a refreshing drink.

However, for those with a bit of reserve energy, you could continue across the road into Camí dels Molins and follow the tarmac road for about 700m to arrive at the famous windmills of Jávea, one of the fifteen ‘miradores’ of Jávea which affords fantastic views across the valley towards the south.

Traversing across in front of the windmills and then passing between the three public buildings in varying states of decay which serve as the viewpoint, the route continues to the small car-park where you follow the road to the left and at the junction continue straight ahead into the rough road of Camí del Monastir to return to the parking area next to the monastery. This adds about 1½ kilometres to the total distance but well worth the effort.

“After a day’s walk, everything has twice its usual value.”