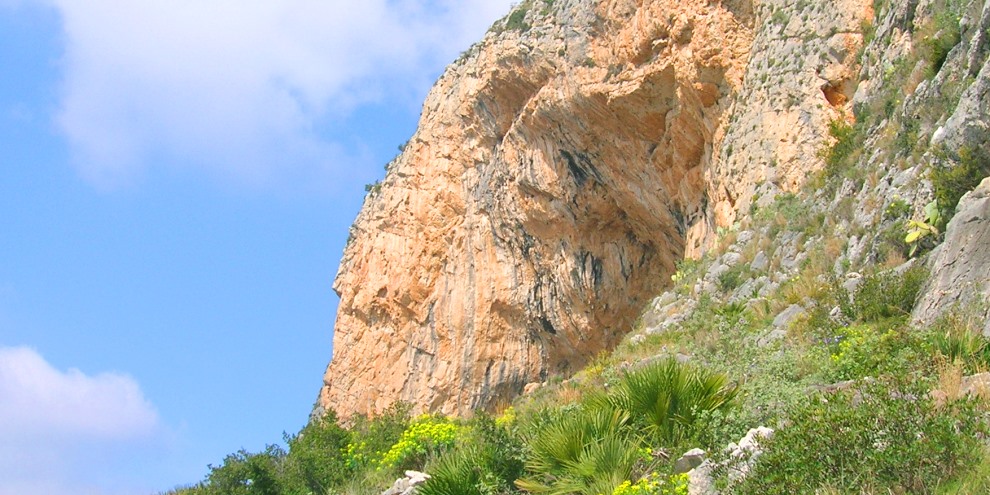 La Cova Ampla del Montgo lies in a huge cavity cut into the southern flank of the mountain of Montgo, a cavern more commonly known as the “Eye of Montgo” such as it forms the supposed eye of the elephant when the mountain is viewed from the valley to the south. I have found no definitive explanation for its formation but one theory suggests that an earthquake dislodged a huge amount of the cliff-face along an already weak fault-line and the large boulder debris within the cavity suggests a certain amount of geological weakness in the area.

La Cova Ampla can be reached from La Plana de Justa, part of a large plateau of pine and gorse that runs for some five kilometres from the eastern flank of Montgo to the tip of the Cabo de San Antonio and the Mediterranean Sea. This plateau can be reached on foot from Javea via an unmarked path which winds up a ridge above the Barranc de Santa Llúcia. Otherwise the usual access is by car using the CV-736 Javea-to-Denia road where parking is available at Les Planes Campo de Tiro (shooting range) on the Dénia side of the plateau. Be aware that vehicle security cannot be guaranteed by the shooting club and therefore cars should not be left in such a state to be tempting to a potential thief. Incidents are rare but not unknown.

La Plana is crossed by a number of wide forestry tracks which are a pleasure to walk. From the shooting range, walk back down the wide track for just a few metres and a narrow muddy path will push through the trees on the right-hand side. Continue along this path for 750m as the huge eastern face of Montgó dominates to the view ahead before the path widens and then meets the junction with one of the main forestry tracks. Turn right towards the mountain and continue for another 200m.  Another forestry track leads off to the left (ahead lies the winding route to the summit of Montgó) and take this track along which lies the route to La Cova Ampla.

The path is marked by a simple low cairn on the right-hand side of the track about 200m beyond the junction – see the image above. The track is initially well-worn as it weaves through the undergrowth which includes Dwarf Palm, Prickly Juniper and Toothed Lavender but becomes less distinguishable as it contours around the head of a deep ravine and then begins the steep climb so one should keep a good eye out for the tell-tale signs of previous passage by other walkers which includes a number of small piles of rocks.

As the path begins the ascent, it becomes more obvious but can be in poor condition in places and sudden slips on loose rock should be anticipated. There are a number of low scrambles to negotiate but nothing that should halt the way of a determined walker.

As the path climbs, take time to admire the views that are opening up to south and east; you’lll also appreciate the chance of a breather. After about 30 minutes of steep ascent, the opening of the “Eye” becomes visible and the route takes on a more formidable challenge, becoming more of a scramble than a walk as it pushes over an ever- steepening rocky surface. Once again, if the way seems unclear, look for the tell-tale signs of previous walkers, such as boot marks on the rock or, sadly, the occasional piece of rubbish.

The entrance is soon reached with a scramble – drops of water may fall from the upper reaches of the opening – and a level dusty shelf with plenty of boulders serving as welcoming seats affords fantastic views over the valley below and beyond. The mouth of the opening is a huge cut in the sheer vertical cliff-face about 65 metres high and 50 metres wide. Large boulders litter the bottom of the opening, indicating the collapse of the roof in the past.

At the rear of the opening, about 25 metres in, are two entrances to caves which penetrate some 70 metres into the mountain. With the use of a torch, they can be explored with some care.

Archaeological work has uncovered evidence that the caves were used more than 100,000 years ago and human remains found with ceramics and ornaments dating back to the Late Neolithic era suggest that they might have been used for ceremonial burials.

If you are lucky enough to make a find that might be of archaeological interest, be aware that Ley 4/1998 of the Patrimonio Cultural Valenciano states that any discoveries are public domain and should be reported to the appropriate authority.

There is plenty of graffiti on the walls of the opening, both old and new, a legacy of man’s eternal desire to leave his mark. Look closely at the roof and one can make out anchor points secured into the rock which have been used to suspend a huge pendulum for the more adventurous who desire to swing out from the cave opening.

The view to the south is stunning. The peak of Puig de Llorença (445m / 1,460ft) with its communications masts is obvious whilst the Peñón de Ifach of Calpe (332m / 1,089ft) peers over the horizon to the right, some 20 kilometres distant. The tower of the church in Benitachell can be made out between the two, almost eight kilometres away. Slightly to the right, 23 kilometres in the distance, the familiar jagged ridge of the Sierra Bernia, the natural barrier between La Marina Alta and La Marina Baja comarcas, rises to 1,129m (3,704ft) whilst on a clear day, the summit of Puig Campana (1,410m / 4,626ft), the second highest peak in the Alicante province, can be picked out just beyond the ridge. To the left, the headland of Cabo de la Nao, which marks the southern limit of the Bay of Valencia, can be seen and a keen eye can just make out the lighthouse over 11 kilometres away.

The descent is made by retracing your steps back down the steep path. Do take care as you descend as the loose surface can give way without notice and this is not the easiest of routes to traverse with a twisted knee or ankle.

When you reach the foresty track again, turn around and admire the route that you have just taken; it looks almost impossible but you can take great satisfaction in having visited the famous ‘Eye of Montgó’ – and in later days as you stare at it in admiration in the twilight you might just be convinced that it will wink knowingly.

“In every walk with nature, one receives far more than he seeks.”