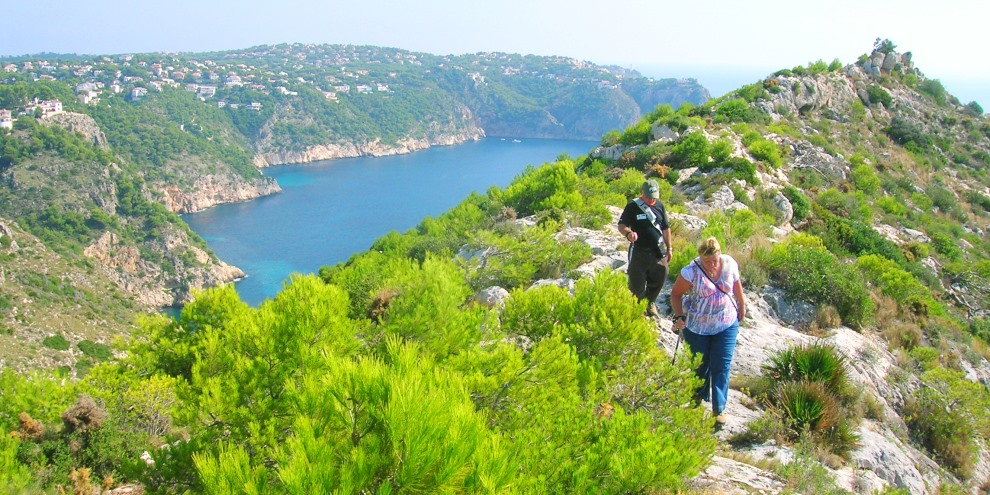 This is a fairly strenuous circular route which takes in a short section of the Granadella coast by way of the well-worn route to the ruins of the Castell de la Granadella and then climbing a narrow ridge on the very edge of the cliffs to the Mirador Llevant, a beautifully-situated viewpoint affording stunning views along the coast and inland across the Parque Forestal La Granadella towards the peak of Puig Llorença with its communication masts and the sprawling urbanisation of Cumbre del Sol. The return is via wide forestry track and a concrete road back to the car-park at Cala de la Granadella.

Be aware that during the high season months of July and August, the road to Granadella cove is closed to vehicular traffic. In previous years, a shuttle bus laid on by the town hall from a parking zone in La Guardia. It is not known if this facility will be offered again in the future.

The route begins close the popular beach of Cala de la Granadella, recently voted as the best beach in Spain by a poll conducted by a national television company. Parking is available in Carrer Pic Tort.

At the bottom of Carrer Pic Tort, there is a wooden signpost indicating several destinations that can be reached on the long circular PR-CV 354 footpath; take the way that is indicated as Castell Granadella to begin the climb along a concrete road for a distance of about 600m. Look out for the yellow-and-white markings on posts and electric pylons to guide the way. At the fifth turn in the road, a rough track climbs steadily towards a row of houses set high up on the hillside above the village of Granadella.

Follow the track along the back of the houses as it narrows into a pathway and then turns abruptly into the trees and starts climbing up beneath high cliffs; once again, keep an eye out for a yellow-and-white marker painted on a tree.

The stone beach of Granadella comes into view as the ground drops away sharply to the left. Wooden railings provide some sense of security as the path gently climbs between the two cliff-faces; look out for a large white arrow painted on a boulder which marks the way, even though it’s quite obvious.

Eventually the path drops into a wide natural viewpoint surrounded by a low wooden fence which provides a stunning view down into the small cove of Granadella and across the wide bay of Ambolo and the little island of Descobridor which appears to be moored just off the headland in the distance.

The path continues along the edge of a small gorge – you may have to push through the undergrowth – and then drops into the deep Barranc de la Xapa via a series of very steep steps, both natural and man-made, for which there are now some handy wooden rails to assist in the descent. At the bottom, you can skip easily over the course of a small stream and the path turns abruptly to the left to push through the undergrowth and skirt around the other side of the gorge with the ground dropping steeply away to the left towards the sea. The path emerges from the gorge and you’re back on top of the sea-cliff with the clear Mediterranean waters a long drop down on the left-hand side. The views are stunning; this truly is a remarkable section of the coast.

The ground becomes particularly steep and, whilst there’s no real danger of sliding over the edge and dropping into those crystal clear waters, a slip might prove somewhat problematic so two handy chains have been secured along a couple of particularly tricky sections.

The first is fairly simple and those who have opted to wear sturdy footwear should skip across the section with no problem; those who opted to cover the route in flip-flops might find it a little more difficult! A few hundred metres on, a two metre high wall of rock appears to block any further progress but there is a second chain securely attached to the rock above which can be used to haul yourself up onto the top. It can take a little more effort and determination but the reward is very close.

Having scaled the chain, the ruins of the castle of Granadella sit below you. Follow the obvious path down to a small wooden signpost indicating the direction to the castle (not that it’s needed, except maybe during periods of extreme fog); it also indicates the direction in which the PR-CV 354 path continues as it scales the narrow ridge above, the next stage of the route.

It really is worth dropping down to the castle ruins which sit on the headland of Morro Castell some 40m above sea level. Built in the first half of the 18th century as part of the coastal defence network which looked to protect the coast from the marauding pirates, a contingent of just three men with some arbitrary artillery would have kept watch over the cove of Granadella and across the bay to the Rincon d’Ambolo where there was – and still is – a watchtower on top of the cliffs of the narrow headland. The horse-shoe shaped building, the last to be built along this part of the coast, had walls that were up to three metres thick but they couldn’t stop the castle being destroyed by English forces during the Peninsular War to ensure that the defenses couldn’t be used by Napoleonic forces.

Those with a healthy respect for heights can scale the rocks beyond the castle and gaze south along the steep almost impenetrable cliffs towards the Cap d’Or. Take a few minutes to enjoy the relative tranquility of this place. Explore the ruins, including the well which is still in good condition and has a capacity of almost 24,000 litres of water.

After a few minutes exploring the castle and admiring the stunning scenery, head back up to the signpost and then follow the rough path uphill in the direction of Mirador de Llevant. The track, barely discernible in places, crosses bare rock and rough ground with painted yellow-and-white markers as well as handy small cairns guiding the walker onto the ridge.

Now it becomes a bit of a steep scramble as you pick a comfortable route through the boulders and rocks to the top of the ridge, some 120m above the castle. Once at the top, the way forward is fairly easy as the path winds its way along the cliff edge, around huge boulders and large bushes, dropping away at several points in diversions which don’t seem obvious at times.

Look out for several natural balconies to the left-hand side where, with a little care and respect for the height, you can sit and take in the stunning views which stretch south to Moraira’s Cap d’Or headland and, just poking over the top, the Peñon d’Ifach of Calpe.

After some time picking your way along the ridge, the path drops into the undergrowth then winds its way up to the Mirador Llevant, a viewpoint some 180m above sea-level with a handy seat and, at one time, a roof which provided shade from the sun – or if you’re unlucky, shelter from the rain. This is a perfect place to stop for a while and take some refreshment whilst enjoying the stunning scenery.

When it’s time to move on, an obvious wide stone track leads away from the viewpoint in the direction of the Cumbre del Sol urbanisation. The peak of El Montgó peers over the top of the ridge ahead whilst the views over the Parque Forestal La Granadella are compulsive attractions so watch your feet.

After about 600m or so, take the first obvious right which becomes a wide concrete road which winds its way down to familiar territory; you will encounter a chain stretched across the road to prevent vehicular access into the Parque Forestal but it’s perfectly okay for walkers to cross it and continue on their way.

After almost a kilometre of descent, you’ll reach a familiar junction; continue straight on and you’ll be heading back to the ruined castle so follow the concrete road as it continues its descent back to Granadella village and the parking area.