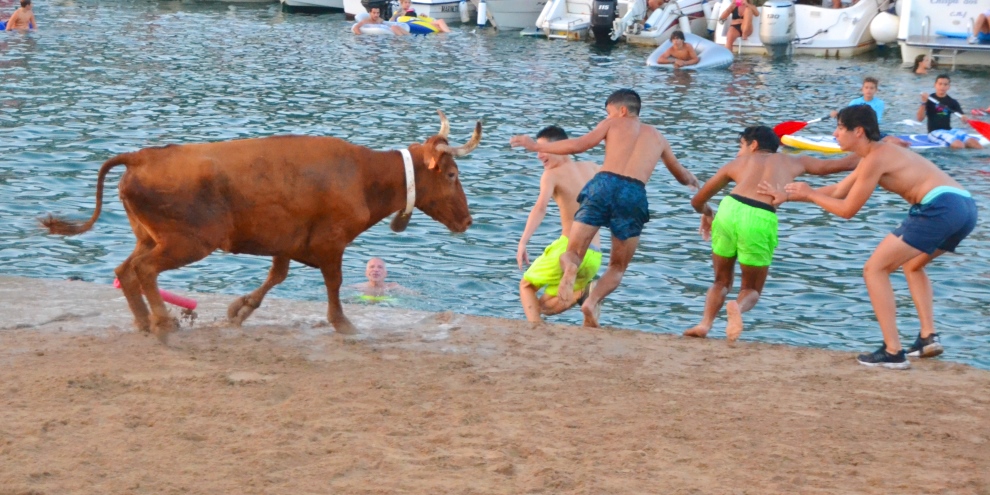 Although the official celebration is on December 10th, some Spanish towns and cities celebrate their patron ‘Mare de Deu de Loreto‘ on September 8th – the feast of the Nativity of Our Lady. In Jávea, she is the patron saint of the port area and regarded as a protector of its fortune, both on land and sea.

It’s unclear how the image first arrived in Jávea. Stories talk of an Italian armada which tried to seek safety in the wide bay after being pursued by marauding pirates from North Africa. Some of them floundered in a storm and sank. Depending on who you talk to, either one of the ships was called ‘Our Lady of Loreto‘ or one of them was carrying the image.

However, long before this incident, there was a church in the historic town around which lived the fishermen who sought safety within the old town walls when pirates were a real threat along the coast. The church is long gone. The only indication of its presence is a small fountain in a modest little square next to Bar Trinquet, recently renamed Plaça Vicent de Gràcia as well as a road named Calle Virgen del Loreto running alongside it.

Thus the veneration of the Virgin was already in place long before the Italian armada incident. Whatever the truth, the image has been venerated by Xabieros for several centuries.

A church existed in the port for some time before, in the late 1960s, a new building honouring the Virgin was built on the same location, a remarkable example of modern church architecture, ranking alongside Liverpool Cathedral in the UK and the Cathedral of Brasilia in Brazil.

It was funded through contributions from local fishermen who vowed to build a new church for their patron saint if they were saved from a vicious storm that was threatening their lives whilst at sea. It has a very unusual design which resembles a boat crashing through the waves; wander inside and the ceiling resembles the wooden hull of that boat.

Celebrations honouring the port’s treasured image of Mare de Déu de Loreto date back to the late 19th century and the centenary celebrations took place in 1996 – only for evidence to be discovered soon after that suggested that the origin of the festivities actually dated back to the 1870s when the first jetty was built as the port developed into an important gateway for the export of raisins to the rest of the world. The year 2021 was officially marked as the 125th anniversary of the festivities, although celebrations were somewhat muted due to the ongoing COVID-19 pandemic that forced communal events such as fiestas to take a back seat as the world battled to recover from a devastating disease that swept across the globe.

Now, for 2022, the fiesta is back and it will be a special programme to mark that massive anniversary.

Like most fiestas, everything is launched by way of a special ceremony which in recent years has taken place on the wide Avenida de Lepanto where a large stage is built to present the mayorales for the year, the main protagonists of the fiesta and effectively the carnival queens and their consorts.

The youngsters are also presented, those in which the future of the fiesta is assured, and there are normally some musical numbers, dances or acts reflecting the maritime heritage of the port zone. And there are, of course, those beloved long speeches, normally by the President of the Organising Committee, the councillor responsible for the Department of Fiestas and the Mayor.

Representatives of other fiestas, both in Jávea as well as surrounding municipalities such as Gata de Gorgos and Benitatxell, often file onto the stage to honour the ‘mayorales’ with gifts.

At the conclusion of the official ceremony, the whole audience rises to its feet to stand in respect as the stirring anthem of the Comunidad Valenciana called ‘Himne de l’Esposició‘, composed in 1909 but based on a 16th-century anthem dedicated to Saint George who was the patron saint of the Kingdom of Valencia.

The night concludes long after midnight with a modest firework display followed by music and dancing well into the early hours. Fiesta has started.