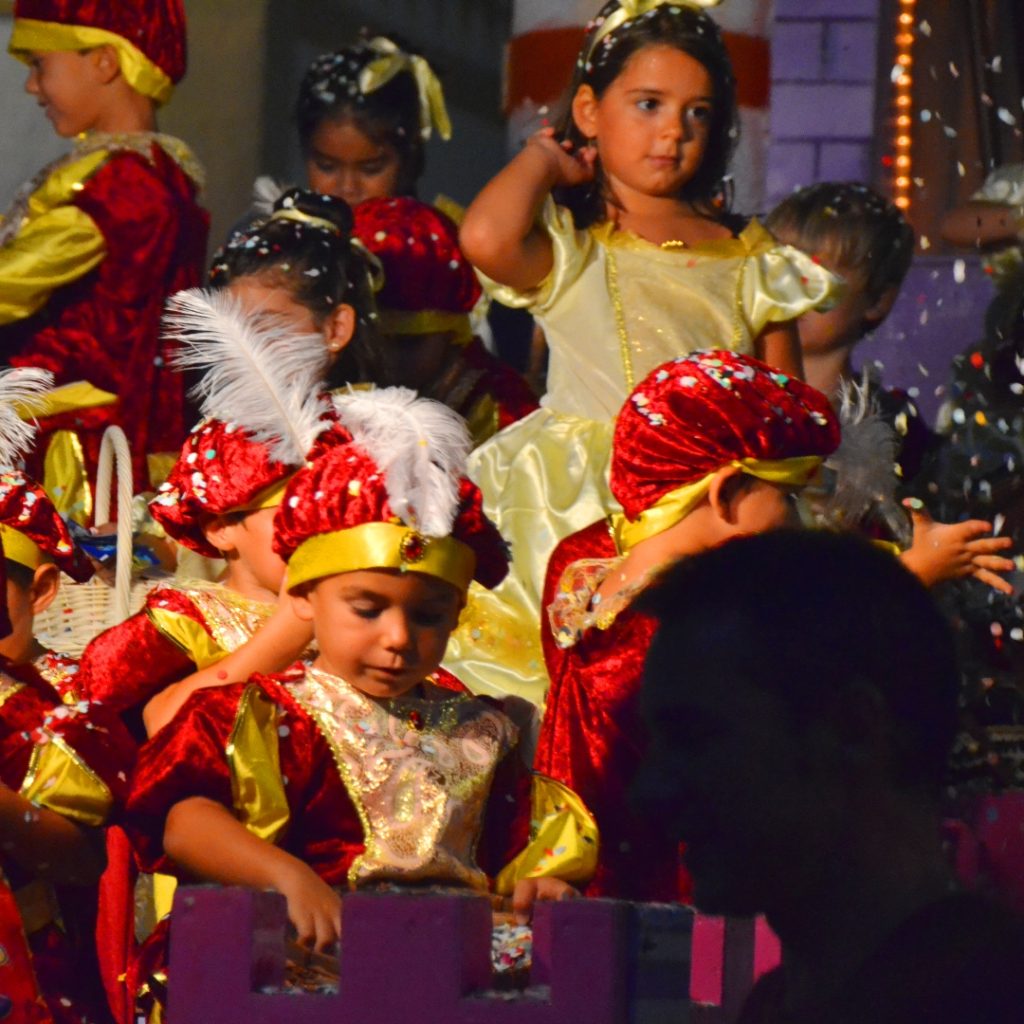 Children’s Day is a much-anticipated day for all the family. The younger members of the community are a vital part of a fiesta for it is they who will continue the traditions into the future so they are never forgotten. Indeed many are encouraged to join the fiesta commission with their parents or grandparents in order to get involved from an early age.

The special day normally begins with the desperta, the wake-up parade through the port zone although there is a difference for the children as they are encouraged to come along with their own instruments and join in with the band as it makes it way through the streets. And there is a reward waiting for them at the end where the neighbours of Calle Dr.Fleming have prepared some hot chocolate for them.

In Avenida Jaime I, there will be a number of inflatables and water games for the kids to enjoy whilst a number of more traditional games will have been organised in Calle Triana by the residents of the street and Penyas La Penyeta Roja and Pili La Banyà. It’s a full-on morning and there is so much going on. Suddenly, right by the beach, a meringue fight will break out with the mayorales of the year lobbing coloured meringues into the crowd, covering them in a sticky mess. Most are willing, the unaware might get caught in the cross-fire. But it’s all good-natured and the kids love it, everyone running into the sea afterwards to wash off the mess and briefly turn the water into a myriad of colour.

The morning is not yet over. Just before lunch, the action moves to the sandy bull arena where Peña La Bufa has prepared a long horizontal and very slippery pole which extends out over the waters of the port. The youngsters take it in turns to edge along the pole to try and reach the piece of wood nailed to the very end of it. Most fail, losing their footing on the soapy surface of the pole and falling into the water. But some manage to grab the wood before plunging into the sea and their efforts are rewarded with great cheers and applause and perhaps a little token from the peña.

In the final act of the morning, the youngsters can enjoy their own moment to show off their bravery with the carretons a la mar. The carretón is a two-wheeled cart on which a life-sized head of a bull has been created. Under the blazing midday sun, very fit young men and women push the carts around the arena, chasing the kids who smile and giggle as they flee from the horns. Parents and members of the family are on hand to keep an eye on things, gently pulling away the very young who might not realise the danger. The older ones jump into the sea like the adults, dreaming of the day that they can do it for real.

All the family deserves a decent lunch and a long siesta after such an exciting morning and there’s a long pause until the evening when the streets come alive again for the Cabalgata de Carrozas – the float parade – in which many schools, peñas, groups and associations participate. There are colourful floats from which boiled sweets are flung into the crowd lining the streets, kids armed with plastic bags crawling through legs to grab them for their growing collection of sugar rush.

Local bands play their music, familiar characters parade alongside the floats, maybe Spongebob will stop to pose for photos or the PAW Patrol will save the day. But it’s the peñas who might be the stars of the show as they create their own satirical floats, tongue-in-cheek comments about the latest political or local news, whether it be who exactly can lay claim to the famous red prawns or the chaos of parking limitations in the beach coves. It’s all good-natured fun.

There’s barely a chance to grab a bite to eat and a refreshing drink before one of the most anticipated events of the fiesta kicks off: the spectacular correfocs del mar, something which is very difficult to explain on paper.

The correfocs is an event that is almost unique to the eastern coast of Spain and involves anonymous figures, their identities often hidden by masks, carrying poles and pitchforks onto the end of which they attach fireworks – and then light them. And then chase everyone.

The heat of summer may be lingering but those in the know will have arrived dressed in long trousers and a long-sleeved hooded top with a bandana tied tightly around their nose and mouth. For those sparks might not do any lasting damage but they do sting a lot when they land on exposed skin or, worse, slip down the back of trainers or underneath the soles of the feet of unsuspecting sandal wearing observers.

The fire and fun follows more or less the same route as the float parade. At various stages, there are static elements which burst into life, either as an extended waterfall of falling sparks to run through or a giant wheel which spins rapidly and shoots sparks out in all directions.

Everything ends in Avenida Jaime I where the noise and light builds to an exhausting crescendo, the people bouncing up and down to the beat before an explosive finale lights up the night sky and it’s all over.

Somewhere in the distance, music is playing. The night is not yet over. It’s fiesta.