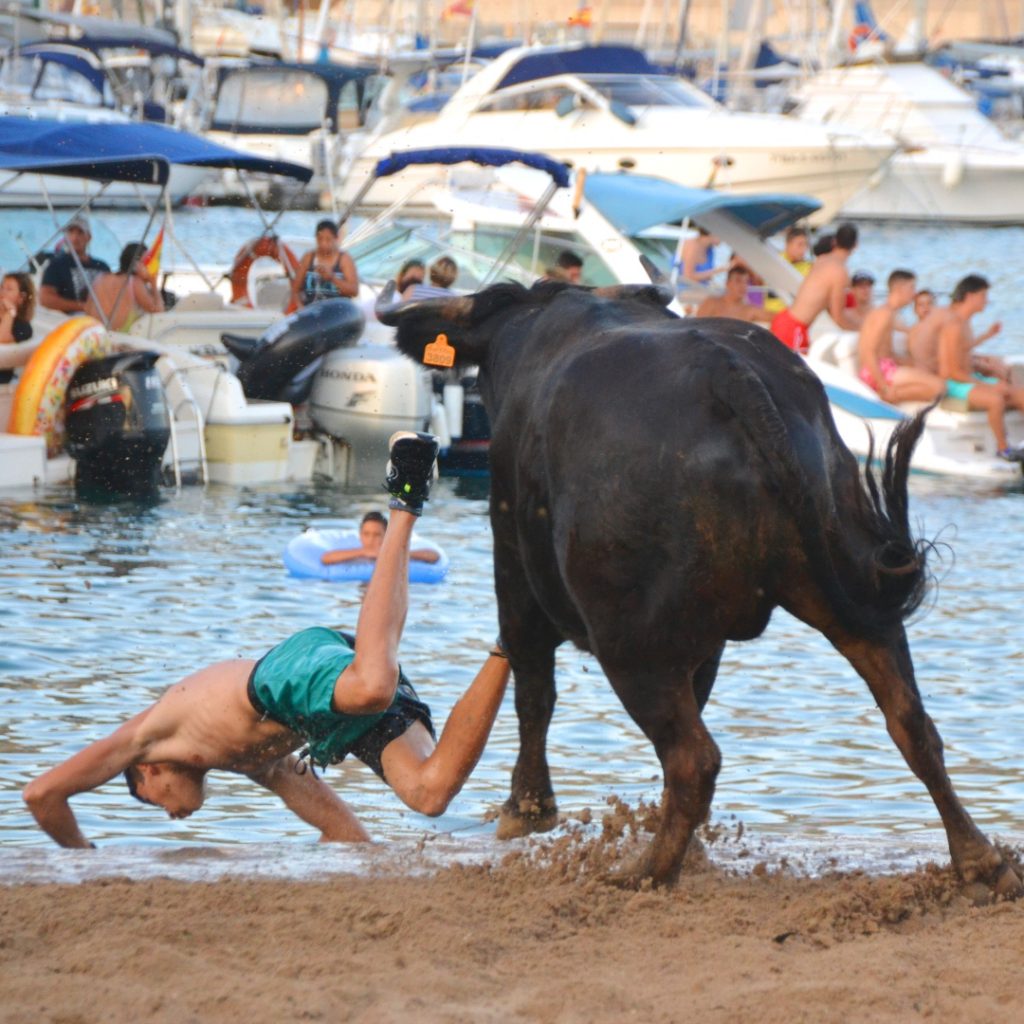 Quite possibly the biggest attraction of the fiesta is the bous a la mar – loosely translated as “bulls to the sea” – which is popular along the eastern coast of Spain in the Comunidad Valenciana and Catalonia.

A special arena is constructed on the wide harbour pier closest to the port area. Three sides are enclosed by large temporary stands which are divided into two distinctively different sections. Below is where those who want to get right up close to the action should go, squeezing between the bars to access the sandy arena or just be up close and personal to both animals and the humans they’re chasing; children are not allowed to enter these sections whilst glasses and bottles are not permitted. Above this dark and narrow corridor are the seats and, unlike the Fogueres in June, there is a charge to access this area; you can pay individually or you can buy an abono to provide access for every act without having to queue up for tickets every day. The seats fill up quickly, especially with families, so get there early.

The fourth side of the arena is open and there is a fairly long drop into the waters of the port. It is here that most “runners” gather for it provides an additional and somewhat more spectacular escape from the oncoming horns – the sea. Anyone can enter the arena and test their courage, anyone except the under-aged and those who are clearly drunk, both of which will be politely escorted back to safety by one of the main safety volunteers provided by both the fiesta commission and the ACT Xàbia, the bull-running association in the town.

Whilst most dive at the very hint of a charge, the brave will wait until the very last moment before plunging into the waters below for they want to try and encourage the animal to follow them. Occasionally one does. Waiting patiently, a small rowing boat moves quickly to intercept the animal. The animals can swim to a certain extent but the role of the volunteers in the boat is to lasso the head to lift and hold it out of the water before rowing to dry land and releasing the animal back into the holding pens at the far end.

Whilst the animals attract a large audience with a thousand or so watching the action every day, there is another attraction to experience and that is the world-famous (their words) Baret dels Bous, a huge rectangular temporary bar set up just a few metres away from the arena. Each evening the bar becomes the centre of life during the fiesta as many hundreds cram themselves into any space available to enjoy a few beers and some very fresh and tasty seafood caught by the very fishing boats moored close by.

The bar is manned by volunteers from the fiesta commission and by the mayorales of the year. In the centre of the bar are several huge grills around which many cooks gather to prepare to perfection tasty sardines, tuna steaks, mussels, crayfish, shrimp, calamari rings and much more. Most punters quench their thirst on a hot September evening with a couple of the quintessential small bottle of beers – quintos – whilst there are also soft drinks and water available. It seems like a crush at times but don’t be timid. Lean forward with confidence to catch the eye of a server – and double up your drinks order!

In addition to the bull events, there are several other acts which take place in the arena. One evening not to miss is the competition between recortadores who are teams of young men who twist, turn and somersault over the horns of the advancing animal. They come from all over the region to take part in the event and compete to take home the fiesta trophy as the best team.

On occasions there is also a display by trained horses who perform a variety of walks, jumps and balancing acts to the instructions of their trainers. Not my cup of tea but it seems popular enough.