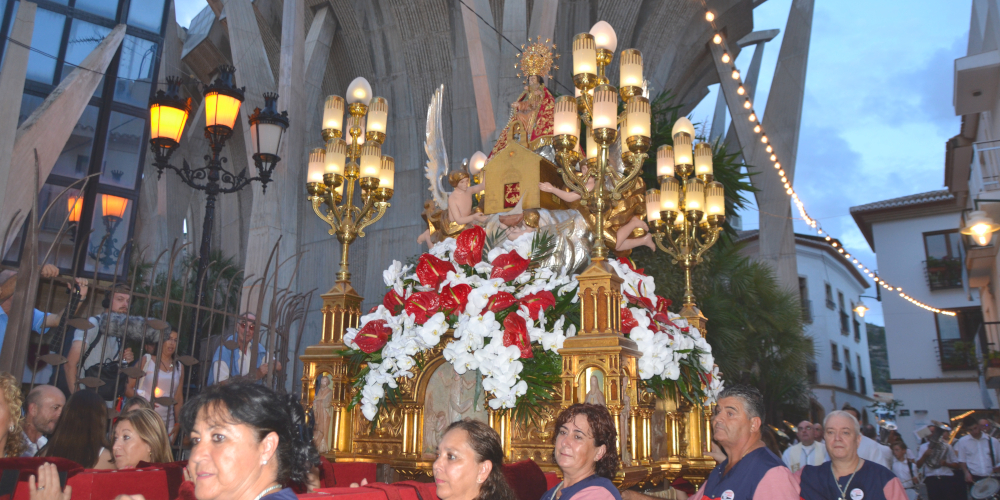 The Virgin of Loreto in Xàbia

There is documentary evidence that there was a chapel that was dedicated to the Virgen de Loreto as early as 1306, which is thought to have been the first Christian temple in Xàbia. That original chapel is long gone but another has been built in its place and, although it is commonly known as Ermita del Popúl, it remains dedicated to the Virgen de Loreto.

The fact that a chapel existed in Xàbia over seven centuries ago which appears to have been dedicated to the virgin seems to be conclusive evidence, but some subsequent research suggests that it may have been much later that the Virgen de Loreto arrived in the village, whether it be because its image was saved from the wreckage of an Italian ship which sank in a storm or that a Genoese warship named “Virgen de Loreto” took on seven pirate galleys and, despite suffering huge damage under cannon fire, her captain encouraged his men to victory over the four-hour long battle, their courage inspiring the people of Xàbia. Or it’s a combination of both. Or just coincidence.

The Virgen de Loreto is known as the patron saint of the sailors of Xàbia. At one time, the fishing community took refuge from violent pirate attacks inside the high walls that surrounded the village right up until the latter half of the 19th century. They naturally based themselves close to the gatehouse known as Portal de la Mar – the gate to the sea – so that they could easily and quickly make their way down to the coast to fish when it was safe to do so. Next to Bar Trinquet, there is a small square with a covered cross and in one corner there is a small fountain which has a building with an image of a woman on the roof. The short steep road that drops down from this square is called Carrer Loreto which reminds us that this part of the historic quarter used to be where the fishermen and their families lived. And the building on the fountain is another reminder, telling us that there used to be a chapel here dedicated to the Virgin of Loreto, the figure on top.

As the threat of pirate attacks subsided the town walls were demolished and the village expanded, the fishing community moved back down to the water’s edge, taking their treasured image of the virgin with them. Initially, it was housed in a dedicated altar inside the Casa del Cable which was opened in 1860 to provide a link by telegraphic cable to the island of Ibiza.

Whilst the chapel in the town was converted to a school and then demolished completely, a modest chapel was built in the port zone, just metres away from the waves of the Mediterranean and in 1954, the parish of Nuestra Señora de Loreto was created. Three years later, the great flood of Xàbia caused extensive damage across the town and it was resolved to build a new church. It is said that fishermen prayed to the Virgin of Loreto during a savage maritime storm, promising to build a new temple if they were saved.

The iconic building was started in 1960 and the architect sought inspiration from the Gospels to develop the design. The twelve concrete pillars which support the metal roof are either the Twelve Apostles or winged angels, depending on whose opinion you seek. (I overheard someone once explaining that they represented the tentacles of an octopus holding a boat above the stormy seas.) Inside, the ceiling resembles the wooden hull of a boat, bathed in light streaming in from the windows on either side. The church can be entered by way of the main entrance, where there are also candles to be lit in dedication and several confessional booths, or by way of several very narrow side doors which are opened to provide much needed ventilation during the hotter summer months and allow people to nip in and out during mass.

The building was dedicated on June 3rd 1967 (the same day that the celebrated Urbanización El Tosalet was inaugurated) and the end result seems very much out of place amongst the older cottages around them. Indeed it has been described as appearing like a giant aircraft carrier surrounded by a flotilla smaller boats. It has become a beloved building and one which won a National Architectural Award in 1969.

The festive celebrations honouring the Virgen del Loreto are often called the “port fiesta” and take place in late August and early September and, if June’s Fogueres de Sant Joan mark the start of the holiday season in Xàbia, then those honouring the Virgen provides a suitable end with the famous aquatic fireworks lighting up the night sky before the children return to school. In between, there are parades – both religious and popular – which fill the streets of the port with music and colour as well as activities for children and all the family and, of course, the award-winning Bous a la Mar in the harbour.

The festivities date back to the 19th century. In 1996, the centenary was celebrated, only for evidence to emerge that there were celebrations dedicated to the virgin dating back the 1870s when the first jetty was built as the port became an important gateway for the export of raisins to the rest of the world. Nevertheless, the 1996 centennial celebrations included the rise of the image of the virgin to the historic centre where it was met by the image of Jesús Nazareno just outside the fortress-church of San Bartolomé. The act proved so successful and popular that it was declared that the image would repeat the feat every 25 years.

The 125th anniversary arrived in 2021 but since the world was still gripped by a pandemic, the planned celebrations couldn’t happen and the people of Xàbia had to wait another year before the health situation had reached a level where festive celebrations could return. In April 2022, the image of the Loreto would finally make its pilgrimage to the historic centre, accompanied by the faith and curious, to spend just 24 hours inside the fortress-church of San Bartolomé alongside the town’s treasured image of Jesús Nazareno before heading back down to the port.