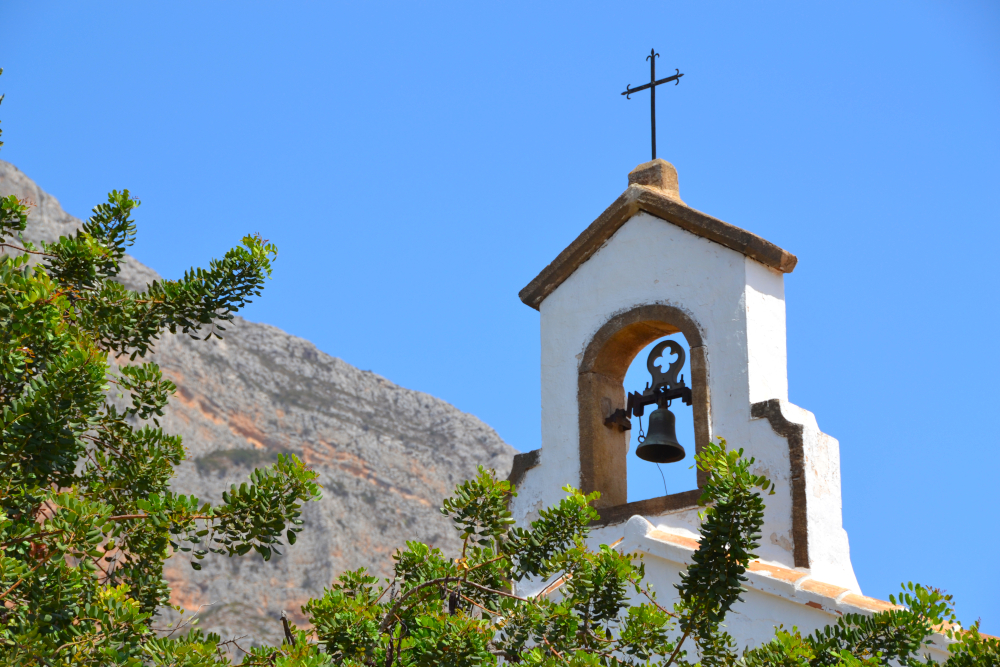 Conquest chapels are so named because they were built during a time when Christian settlers moved down from the north after the conquest of the Valencian lands in the first half of the 13th century, pushing the existing Moorish population into the dark valleys and mountains inland and building their own places of worship.

All are built to the same construction plan: a rectangular building with a tiled gable roof with an access door on one of the minor sides. The interior is usually divided into two or three sections separated by grand tosca sandstone arches and an altar with the images of the saint to which the chapel is dedicated located along the other minor side opposite the door.

There are three such chapels which remain today. But we start with a fourth, one of the first to be built, which was demolished at the turn of the 20th century.

A chapel was built on the headland of San Antonio in 1373 at the request of Sister Catalina Bas, a hermit who had moved to live in caves located in the steep southern cliffs of the headland now known collectively as ‘Les Coves Santes’.

The area suffered greatly from attacks by raiders from the African coast. The monastery of Sant Jeroni had been founded on the flat plateau of La Plana but was under constant threat of pillaging, so much so that the order built a new monastery further inland near Gandía to escape the regular attacks.

As part of the early warning system established right along this stretch of coast to keep an eye out for approaching marauder ships, a watchtower was added to the chapel in the middle of the 16th century, a uniquely square construction since all other towers were built in the circular style which we can see in Torre del Gerro and Torre d’Ambolo.

The chapel was used by residents of both Xàbia and Dénia when they would mix together after climbing up to the place of worship for the feast day of Sant Antoni in January. During a particular pilgrimage in January 1767, there were “some altercations” between the two populations over which town had the right to use the chapel first for its religious service. An agreement was reached in the mid-19th century which saw Dénia given jurisdiction over the chapel “only on the eve of San Antonio Abad, not in any other time and place” whilst it would belong to Xàbia for the rest of the year.

In 1855, a lighthouse was installed in the watchtower and six years later, it was moved 200m to the very end of the headland, a task which may have greatly damaged the chapel and contributed to its eventual demise. It was demolished at the turn of the 20th century but there are remains of floor tiles which can still be seen close to the viewpoint.

One of the oldest buildings in the municipality, the chapel of the Virgen de Loreto, also known as the chapel of Popúl, was built between the 14th and 15th centuries – as is common, the actual date of construction is unknown – and sits on the lower slopes of the Montgó, almost five kilometres outside of the historic centre.

The white-washed building is typical of the conquest chapel, built on a rectangular plan with a shallow sloped tiled roof. It was largely refurbished in the 18th century, work which included the addition of the belfry above the door and an extension which included a choir and the sacristy. The grand tosca doorway flanked by two Doric columns topped with two large spheres were added in the 20th century.

The interior has been greatly modified over the centuries. A single arch separates the nave with the roof supported by large wooden beams. At the far end, behind the altar, is a Baroque painting of the Virgen del Popúl flanked by her parents San Joaquin and San Ana. There is also a statue of Our Lady of Loreto, a carving made by local artist Juan Bautusta Devesa to replace the original lost during the Civil War. In addition, there are some paintings by the renowned local artist Juan Bautista Soler Blasco.

The building suffered serious damage during the Spanish Civil War and was largely abandoned until the early 1970s when representatives from the Anglican Church petitioned to repair the building so that it can be used as a place of worship by the Anglican faithful amongst the numerous British residents living in Xàbia.

On the second Sunday in September, there is a pilgrimage to the chapel for a special mass to observe the feast in day in honour of saint.

Built between the 14th and 15th centuries, the chapel of Santa Llúcia and Santa Bárbara is located on top of the hill of the same name, 163m above sea level, and is regarded as the most beautiful of all the conquest chapels in Xàbia. It is accessible only on foot by way of a steep winding climb up the side of the hill.

The chapel remains locked and the keys are looked after by a family in Xàbia who are also responsible for its care and maintenance. Outside there is a wide porch, added later during renovations, providing some shelter, a bench running either side of the wide door. To the right, a curious colourful grid is painted on the wall; at the time of writing, we still have no idea what it is or its intended function. The side buildings were added during the renovation work in the 18th century.

The chapel is covered by a shallow tiled roof and a belfry sits above the doorway. The bell which rings across the land on the feast day was cast in 2003 to replace the original which dates from the beginning of the 15th century and can now been viewed in the Soler Blasco Municipal Museum as one of the few remaining Gothic bells in the region.

The rectangular nave is divided into two by a large tosca arch. At the far end is the altar and the image of Santa Llúcia; it is not the original which was destroyed during the Spanish Civil War in 1936. There are two smaller images either side, another of Santa Llúcia and one of Santa Bárbara and it is these two images which are carried on the shoulders of the dedicated in a short procession around the perimeter path outside of the chapel on the feast day.

Every December 13th, there is a pilgrimage to the chapel to celebrate the feast day of Santa Llúcia when the doors of the chapel are open for a special mass and a chance to explore the interior. The chapel is also the venue for one of the concerts of the Xàbia Folk Festival each spring.

Built between the 15th and 16th centuries, it is one of the oldest buildings in Xàbia and is dedicated to San Juan – Sant Joan in Valencian – whose celebrations each June form one of the biggest fiestas of the year in Xàbia, the Fogueres de Sant Joan de Xàbia.

In 1817 a new cemetery was built alongside the chapel and recent excavations found thirty graves beneath the floor, 11 of which belonged to children, which have been dated back to between 1817 and 1849. Several ceramic funeral panels were also found which have been carefully restored and hung inside the chapel.

As with all conquest chapels, it has a rectangular floor plan with a shallow tiled gable roof. The upper half of the front wall has been whitewashed whilst the tosca stone building blocks remain exposed around the doorway and two windows. Two skulls have been engraved into the iron plates covering the doors.

Inside the nave is divided into three by two tosca arches with a small open window on the far wall providing some natural light to enter. During recent renovation work, the excavated floor was covered with a wooden walkway allowing access to the far end where the ceramic funeral panels are hanging.

Recently renovated, there are plans to open the building as a funerary museum but it remains closed to the public except on All Saint’s Day (November 1st) when relatives visit family tombs in the cemetery and for specific guided tours organised by the municipal museum.