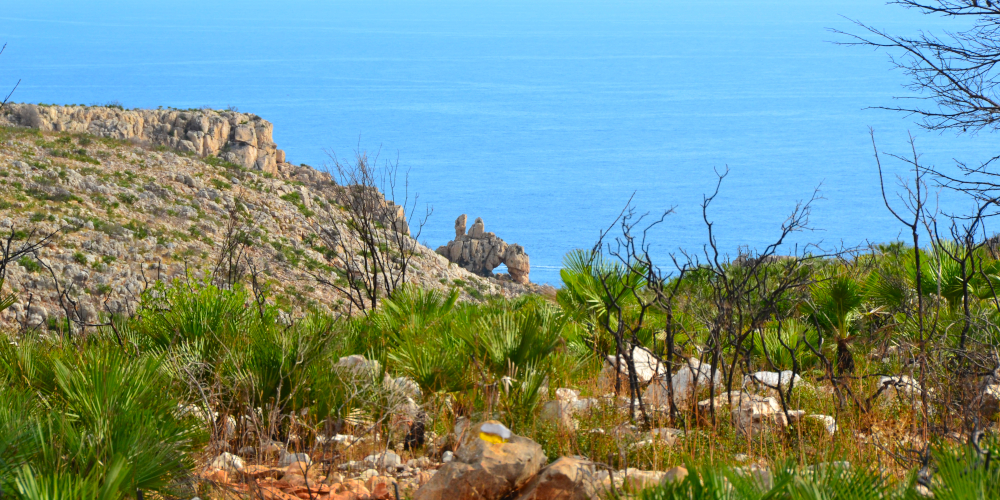 There is a romantic tale that is forever set in stone, a story of forbidden love between two young people, one from Xàbia and one from Dénia. It’s a little known legend rooted in the mists of time but is these days clearly on view to anyone passing along the northern flanks of the grand headland of San Antonio, either by sea or on foot. It is the story of Melcior i Gràcia.

Sitting on a narrow rocky ridge above the deep Barranc de la Foradada, itself a place of ancient significance where evidence of the first inhabitants of these lands have been found, is a curious formation, an eye-catching structure of shattered rocks which give the appearance of two people sitting on the back of a horse or donkey which is leaning down to graze on the vegetation below them.

In past times, such formation warranted an explanation for it surely couldn’t have been formed naturally. Indeed, in these more enlightened times, it does seem remarkable that the forces of Mother Nature have carved this rock into such a familiar and obvious shape.

The story of Melcior i Gracia is not a well-recorded tale and it was told orally by a native of Xàbia during a conference some years ago on the possible origin of place-names and formations such as this one which have been known in the region for many centuries.

It is a tale of forbidden love. And also a reminder of the long-standing rivalry between Xàbia and Dénia, rarely experienced these days, except when the two towns meet in a game of football.

Melcior and Gràcia fell in love across the boundary separating the two towns. Melcior asked the authorities in Dénia for the hand of Gràcia in marriage but was refused, for it was forbidden. But he refused to be deterred. Travelling across the plateau on a donkey in the darkness of night, he pulled the waiting Gràcia up onto the back of the beast and turned around to head back to Xàbia.

However, the young lovers would pay for ignoring that their love was forbidden. That they had been warned several times that it could never happen without repercussions. As they crossed the boundary line, the donkey stopped and refused to go any further, leaning down to start eating. As Gràcia turned her head in fear towards her lover, the donkey and the two youngsters turned to stone. Their forbidden love set in stone forever.