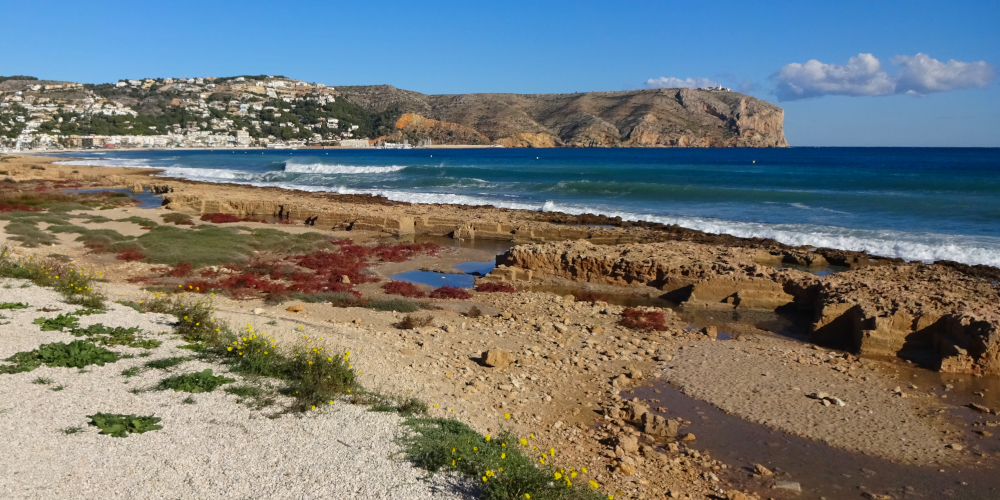 Aside from the modest crescent beach of the Arenal, the section of Xàbia’s coastline which stretches for some four kilometres from the port zone in the north to Cala Blanca in the south is not one of golden sandy beaches that can normally be found along the coast of the Costa Blanca. At first glance, it is simply a low-level rugged rocky coastline of sandy limestone, separated into two by the Arenal beach. But in reality, it is the fossilised remains of sand dunes laid down around 100,000 years ago and they remain some of the most important deposits of their type across the whole of the Valencian region.

To the north is ‘El Primer Muntanyar’; to the south ‘El Segon Muntanyar’, and both are vitally important in understanding the economic history of the town. Whilst the raisin industry provided the riches to build the grand mansions of the historic centre, the blocks hewn from the coastline provided the material to do so.

The ease of extraction of this ‘tosca stone’ made it a useful source of building material and the large quarries were exploited for almost 2,000 years until the local council brought an end to the industry in 1972. Practically the entire historic centre of Xàbia has been built from stone blocks hewn from these quarries, as well as those carved out of the famous sea cave of Cova Tallada. The golden façades and decorative elements that glow in the sunshine, giving the old town that unique colour; all have been built with Xàbia stone.

The signs of quarrying are obvious along the coast between the port and the Arenal zone. Mother Nature doesn’t leave so sharp a surface, so precise an angle. During winter storms, the waves crash onto the coast, the water pouring over the rock and the artificial basins fill with water. It’s difficult to imagine how hard it must have been for the quarrymen – the ‘tosqueras‘ – to cut the blocks from the rocky coast.

Everything had to be done by hand: the extraction, the transportation, and the masonry, carving the blocks into the final product. The work was hard. By day, men would hack at the coast with picks and hammers, pulling out blocks that weighed between 30 and 40 kilos. It paid, but often not enough, so, as the sun dipped towards the horizon, many of them would head south to set up nets to catch sardines during the night to sell the following day.

By the start of the 20th century, some 5,000 tons a year was being extracted and exported by horse and cart to other towns in the region, an expensive task. So important was this industry considered to be, that the local council made an approach to the Spanish Government in 1910 to link Xàbia to the railway being built between Villajoyosa and Dénia to make it easier to export the blocks further afield as well as provide rail access to the busy port area. A disgruntled Serbian nationalist put an end to that proposal and you can read more about that in the following link.

How a shot heard around the world stopped a railway

One of the most famous tosqueras was Vicente de Gràcia. He created the iconic fountain that stands outside the church in the heart of the historic centre, and built the fountain and covered cross in the garden-square next to Bar Trinquete, a space that is now named after him. He created the balconies outside the Casa de Abadía in Carrer Roques and many decorative elements inside the church of San Bartolomé.

When the quarrying was brought to an end in the early 70s, the only way to find this popular building material has been to import at great expense from elsewhere or re-use it from old buildings. We have seen first-hand a ramshackle town house demolished with violent determination by men who then carefully and precisely removed all the tosca arches and walls with a strange affection, the blocks taken away to be cleaned and prepared for re-use as a new building rose on the same plot. Now, as construction moves towards completion, you’d never know that the building is less than a year old, thanks to that golden stone known as ‘tosca’.