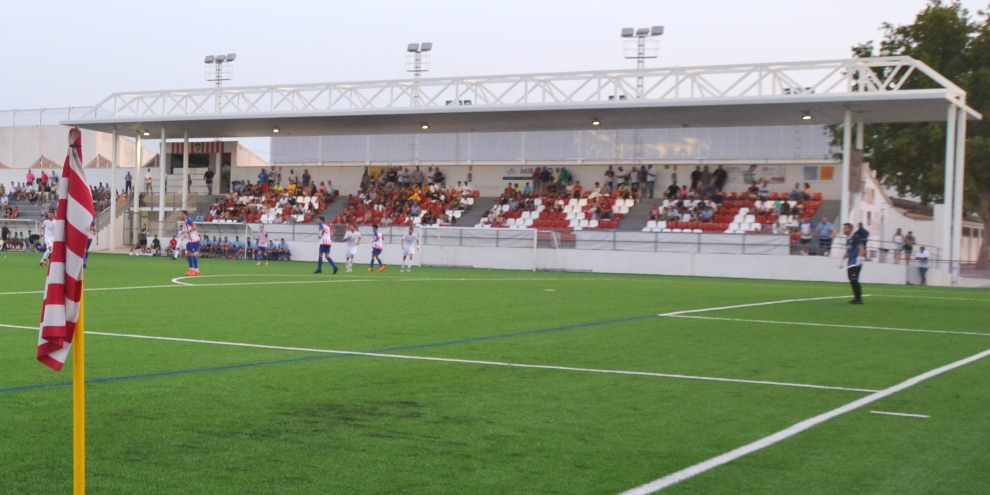 CD Jávea have been part of the community for 80 years. Very much a provincial club, the rojiblancos have rarely breathed the purer air of the upper echelons of the Spanish league pyramid but have established themselves as one of the more progressive lower league clubs in the region. Occasional spells in the Third Division have interrupted an otherwise solid presence in the Valencian Regional Preferente, one of the more powerful regional set-ups in Spain.

CD Jávea were last promoted to the Third Division in the early 90s but within three years they were back in the Regional Preferente and here the team has remained. The club last reached the promotion play-offs in 2002, losing out to SD Sueca in a two-legged tie, and came close in 2019 when they finished 4th. The club have long been regarded as one of the powerhouses of the region, alongside CD Dénia and Pego CF, but the town still waits for return of the glory days of a quarter of a century ago.

The club boasts a well-respected football academy which has produced several players who have gone on to greater things, such as goalkeepers Ádrian Ortolá, currently at Belgian side KMSK Deinze and Antonio Sivera (Deportivo Alavés).

Pre-season preparations were not the best after the whole board of directors resigned in protest at the delay in financial support from the town hall. But early performances saw CD Jávea top the league for the first time in 19 years and there were early ambitions of claiming one of the top three spots and chance at promotion to the Third Division. But an extraordinary winter collapse saw the side free-fall down the table and those ambitions turned to concerns that relegation might be the destiny of a club in administrative turmoil. But a mixed run of results secured safety and CD Jávea finished in the bottom half of the table for the first time since 2013.

The COVID-19 pandemic meant that the Regional Preferente would be divided into six groups instead of four and only the top two sides in each would play-off for promotion to the national system. The league started in October then was suspended for three months over the winter after the third wave of infections swept across the country and finally an outbreak of infections at the club itself meant that it had to play its final three games in six days. CD Jávea finished third, the highest position for almost two decades, but results weren’t good enough to catch top two CFI Alicante and CF UE Tavernes proved to be too strong.

A decent opening half of the season was not enough for the board of directors and Juan Carlos Signes was gone. His replacement Roberto Granero tried to lift the club into another gear but the season was suspended after 26 games due to the COVID-19 health crisis and formally brought to a close by the FFCV without another ball being kicked; CD Jávea finished 5th.

CD Jávea went undefeated for the first 16 games of the season but ten of those matches ended in a draw and the victories were less than inspiring. Coach Villaescusa was dismissed and replaced by Juan Carlos Signes – who lost in first game in charge, the club’s first defeat of the season. The goals started flowing but the side couldn’t lift themselves above 4th.

A 1-4 home defeat to CD Dénia made an uncomfortable start to the season but the side rallied and was challenging for a top three spot by Christmas. A new roof over part of the main stand did not receive universal approval of the fans and a collapse of form on the pitch during the second half of the season saw them joke that it might be jinxed. The side finished in 7th spot, way off the play-offs.

A disappointing start to the season saw CD Jávea struggling in the lower half of the season by Halloween, a nightmare compared to the ambitions of the coach. But a run of 11 games without defeat lifted the club towards towards the top three before just two wins in the final seven games put an end to those ambitions and the club finished 6th.

It took eight games for CD Jávea to claim its first victory by which time the side had slipped into the relegation zone. Coach Moratal was dismissed in November with sports director Franco Borrás taking over as caretaker either side of Christmas, lifting the club into the top half. Juanjo Cháfer’s arrival saw an immediate impact and Jávea made a strong bid for a play-off spot before a curious late collapse saw the side finish in 8th position.

CD Javea finished sixth but had put in a claim for a top three place for much of the season until a 0-6 home defeat to Recambios Colon CF applied the brakes on the ambition. The rojiblancos also recorded some of their biggest wins in their history when they crushed CD Chella 8-1 before defeating relegation-bound Catarroja CF 6-0 on their own pitch. The club finished third top scoring team in the league with 67 goals in 34 games behind UD Alginet (81) and Recambios Colon CF (70) and scored 21 of those goals in their last five games of the season.

With coach José Luis Bisquert able to add some experience to the side during the summer of 2013, including the arrival of Dani García from CD Dénia and Sergio Mesa from CD Llosa, the 2013/14 season would be very interesting. An unlucky opening day defeat at CD Dénia was followed by an eight-game unbeaten run in which Dani García would score four goals, including two stunning strikes that would have been worthy of a greater stage. The rojiblancos would finish in 8th spot.

The 2012/13 season delivered a campaign to forget, despite a promising start which saw CD Jávea in early contention for a play-off spot. The ‘rojiblancos’ drew 15 of their 34 games and won just two games in the second half of a season which included a depressing eleven-game run without a win. The two victories – one at home against Racing Algemesi and the second away at UD Ondarense – would be against two sides who would ultimately be relegated, scant consolation for such a miserable season. CD Jávea finished 10th.

The 2011/12 season was ultimately one of the most successful seasons for almost a decade. A run of six wins in seven games lifted the side into fourth spot and within a whisker of a play-off place. But then a miserable final run of five games without a win saw CD Jávea slip to 6th, including a 1–0 home defeat to relegated Torrent C.F. on the last day of the season, a loss that ended hopes of lasting the whole season undefeated at home. Yet, it was the club’s highest finish since 2003 and promised much for the future.

The 2010/11 season began badly, the worst start for some time with five straight defeats and two draws which saw CD Jávea firmly established at the very bottom of the table. After a 3–2 home victory over U.D. Horadada, the ‘rojiblancos’ gradually lifted themselves away from the wrong end of the table with a series of much improved performances, including a 4–1 thumping of play-off contenders Hércules C.F. “B”. The season continued to be a mixed bag of results, the most disappointing of all being the spineless 5–1 defeat at close rivals U.D. Altea who would finish the season as group champions and ultimately win promotion to the Third Division through the play-offs.

The 2009/10 season began with coach Kenny Brown leaving the club after just three games to take up an assistant manager position at Grays Athletic. Former player and captain Jose Luis Bisquert was appointed as head coach a few days later. In October 2009 President Mark Catlin resigned from his position and a caretaker board took responsibility for the running of the club. Through their hard work, support for the club began to build again despite the lack of progress on the pitch. The club finished in 13th spot and, although relegation was ultimately avoided, it had come close for a few weeks during the late winter.

With a British interest growing in the club, three players from Southend United joined CD Jávea on a six-month loan, with James Lindie making a instant impact by scoring 7 goals in the opening half of the season. But the club was making little impact on the top three and would finish the season well adrift the play-off zone in 7th spot. For the record, the link with Southend United disappeared as soon as it emerged.

The appointment of local expat businessman Mark Catlin as president suggested a new era for the club, hoping to capitalise on the 5,000 or so British residents in Jávea. The club even appeared on British television in a Sky Sports special called “La Lower Liga” which explored the impact of the British ex-pat community on football on Spain’s Costa Blanca, following the fortunes of the club and our fledgling international supporter’s club called ‘Peña Javeamigos’. On the pitch, however, things weren’t so exciting and the club finished in 9th spot.

CD Jávea almost left the Regional Preferente but in the wrong direction in a chaotic season for the football club. Young manager Alberto Araujo was tasked with putting together an exciting side that could challenge for promotion but by late November the club was just above the relegation zone. Kenny Brown was sought as a replacement but the FFCV decreed he couldn’t be appointed so Juan Mitgeta returned to the club in a caretaker role. Jávea won just once in 21 games between 5 November 2006 and 6 May 2007 and a 0–1 home defeat at the hands on UD Altea forced the rojiblancos into the drop zone. Yet somehow the players pulled themselves off their knees and carved out two remarkable wins, a 2–1 away victory at Albatera CF and a 4–2 home win over CD Polop on the last day of season – which was watched by the youth squad of Manchester City – a victory which secured safety by two points.

A decent start to the season saw the club sitting nicely in third place by the end of November. And then the collapse began with five straight defeats plunging the rojiblancos into the bottom half of the table and the board had to act by dismissing Franco Borrás and appointing up-and-coming coach Alberto Araujo who had an immediate effect with two victories away from home in his first two games, including a particularly delicious 3-0 win at Altea. But there was not enough time for a late charge for the top three, despite five victories in the last six games, and CD Jávea finished 8th.

This was a season that almost was the one. A great start saw Jávea sitting comfortably in the top three but a crushing 0-6 defeat at eventual champions CD Alone burst the buddle and the club slid down into the bottom half. However after Christmas there was a charge for the top with just three defeats and with two games to go, the club seemed poised to claim one of the three play-off spots. However, a home draw against Altea and then defeat to Hercules CF ‘B’ on the last day of the season put paid to those hopes and CD Jávea finished fifth.

Just five wins in the opening half of the season saw the club enter the break firmly positioned in the bottom half of the table but coach Juan Mitgeta is a man who never throws in the towel and he guided the club to finish just inside the top half, although a decent run in January and February saw Jávea reach the lofty heights of 7th before dropping back to 9th.