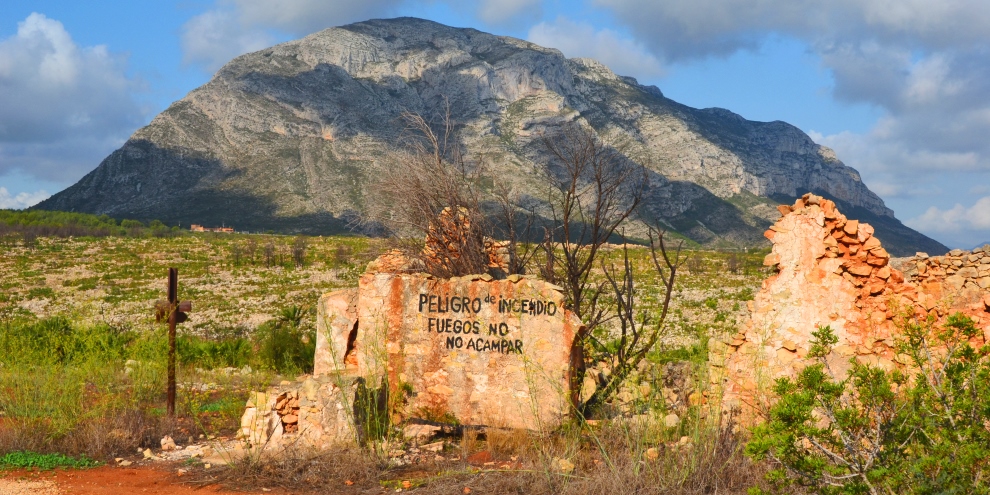 This is a circular route covering the eastern part of La Plana, incorporating sections of the official trail PR-CV 355 and less popular paths along the northern side of the plateau which offers rare views of the hidden ravines that cut deep into its northern flanks before swinging south to take in the historic windmills and the views to the south over Xàbia and beyond.

The route starts amongst the trees of the recreation area of La Plana, a small copse which miraculously escaped the flames in 2014 and remains to provide welcome shade for the car.

There is a short detour to the north of about 400m to a viewpoint on the very edge of the northern flank of the headland above the Cova dels Coloms with great views towards Dénia and over the bay of Valencia.

The route follows the PR-CV 355 official trail east towards to the mountain of Montgó. Within 200m there are the remains of a lime kiln a few metres off the track on the left. This is Forn de Calç de les Faroleres that produced lime which, when mixed with soil or sand and water, formed mortar cement, the basic material for building whilst if it was dissolved in water it would produce numerous domestic and industrial uses. This kiln was called “les Faroleres” since it was located next to the houses of the families who maintained “la forola” or the lighthouse of San Antonio.

We continue on. What was once a pleasant shaded avenue between tall pines is now an exposed and rather barren plateau, the trees burned away in the 2014 inferno so there is little shade along this track these days so take care and make sure you have appropriate protection for your head and shoulders.

We follow as it bends around the edge of several deep ravines including the Barranc de la Cova del Tabaco, the head of which comes right up against the path to the left. This would have been barely noticeable before the fire; now it’s an amazing sight. Cova del Tabaco? Considering the reason for being of the old barracks at which we shall soon arrive, does this not give us an idea of what once might have been hauled up that ravine?

As the wide track bends to the left, we arrive at the old barracks of the Carabineros, a 19th century building from which surveillance of the coast could be controlled for customs purposes in the battle against smuggling. It was abandoned in 1940 when the unit was integrated into the Guardia Civil and fell into ruin. Still owned by the Ministry of Defence, the Ayuntamiento de Xàbia tried to acquire it for many years to restore into a visitor centre for the Parque Natural del Montgó but had been constantly thwarted by the high price being demanded. You can explore inside but with care for debris and vegetation litters the floor and an old well in the floor has now been exposed.

To the left of the ruins, a track passes through the rocks and undergrowth behind a house and makes its way across the plateau and behind some more houses before eventually emerging onto the wide track of Camí la Plana de Sant Jeroni.

Turn right and follow the wide track to its end where the route continues north towards the sea. Soon the route markers of the PR-CV 355 encourage the walker to turn right and continue the journey towards the famous Cova Tallada (a route which is described here) but we continue straight on to follow the narrow path into what was clearly once an enclosure of sorts.

After just a few metres, look to the right and you should be able to see Xàbia’s strangest rock formation known as Melcior i Gràcia. It’s not immediately obvious to many but if you look long enough, you may start to see what appears to be two figures sitting on top of a horse or donkey which is leaning down to drink or take a nibble at the undergrowth. A local legend all but lost in the mists of time insists that they are two lovers from either side of the mountain, one from Dénia and one from Xàbia, who were turned to stone when they tried to elope.

The ravine above which they now sit for eternity is the Barranc de la Cova Foradada where the remains of a nomadic tribe have been found dating back some 30,000 years, the earliest evidence of human habitation in the area.

We continue along the track and through a field of mysterious tall and narrow piles of rock, clearly built as forms of cairns by those wishing to mark this track but it’s rather unsettling passing through them, especially it you’re walking alone. The pace often quickens.

Eventually the narrow path emerges onto a wide track where there are some ruins, long abandoned buildings daubed with warning about not camping due to the danger of fires. To the right, a path picks its way through the rocks and low bushes to the Torre del Gerro but we’re turning left to follow the wide track to the main road. To the right, the mountain of Montgó has a completely different appearance, a low wide mound, whilst in the foreground is the shooting range of Xàbia and you shouldn’t be too alarmed to hear shots ringing out, especially at the weekend.

When we reach the main road, there is an option to turn right for a short detour to visit the cross above the L’Avenc de Xàbia, marking the spot where more than a dozen people lost their lives during the Spanish Civil War, flung into the deep chasm one dark night in November 1936, an act which has become known as the ‘Night of the Abyss’.

The main route continues straight on into Cami dels Molins which, as its name suggests, leads to the historic windmills of Xàbia which form part of the network of viewpoints stretching from north to south. Indeed, the windmills are the finishing line for the Mirador Challenge where, tired and exhausted, the teams cross the line after completing almost 30 kilometres of walking.

These windmills capitalised on the prevailing Lleibeig wind which blows over the plateau (the local athletic club uses the name) to grind wheat and other cereals. In recent years there has been an active campaign to renovate them to benefit from their obvious tourist attraction since the views to the south are quite stunning. Now they are lit at night but there has been talk of a complete restoration of at least one of the windmills, complete with sails.

Passing through the windmills to the other side, there is a small parking zone and we turn left to follow the track back into the centre of the plateau. However, after just a few metres, we turn right into Carrer Penaguila and follow this wide track for 800m or so to re-join the tarmac of Calle Cuesta de San Antonio. Bearing left, we follow the road back down to the main road where we turn right and walk the 600m back to the recreation zone.

However, look out for a sign on the right opposite the car-park which offers a short detour to the remains of another lime kiln exposed after the savage inferno of 2014: Forn de Calç La Plana de Xàbia. From there, there are also stunning views over the end of the headland and down into the bay of Xàbia.

Take a deserved breather back at the car. There are picnic tables amongst the trees to enjoy a snack and a drink. At the time of our last visit, the fresh-water fountain was still working in the centre of the round courtyard.

To add to the experience of being on La Plana, you could drive to the end of the road and enjoy the views over the bay of Xàbia from Mirador Cap de Sant Antoni before heading home for a well-deserved siesta.

“To walk in nature is to witness a thousand miracles.”