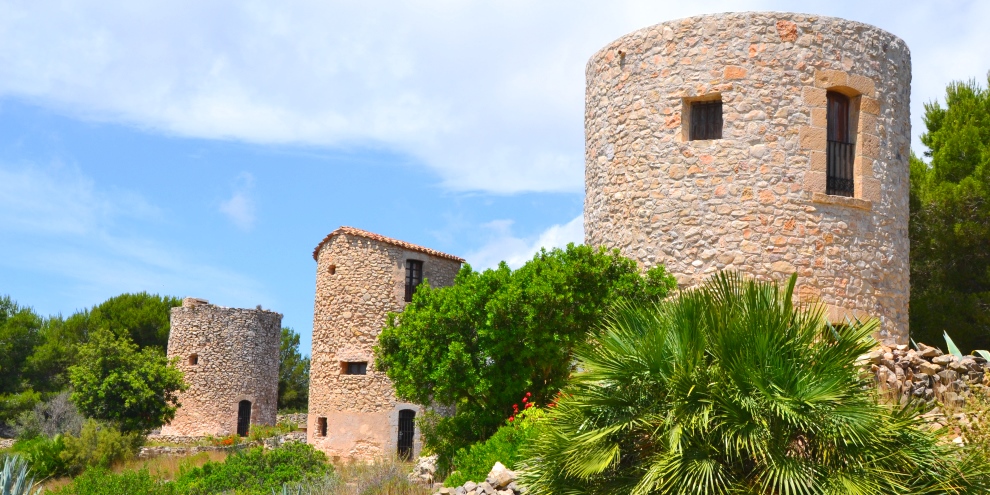 This is a pleasant circular route via the historic windmills of Jávea, a line of round windmills in various conditions which were built between the 14th and 18th centuries to grind wheat and other cereals grown in the region. A mixture of road and rocky path, the route climbs steeply up to the heights of La Plana on which the windmills were built to capitalise on the Llebeig wind which blows across the flat plain. After enjoying the views from the windmills, the route descends using a little-used wide path which affords great views of the hulk of Montgó and the hill of Santa Llúcia before rejoining the tarmac to pass through the urbanisation of Puchol to return to the start.

The route begins at the junction of Carrer Beniganím and Camí Vell de la Mar just beyond the main avenue between the old town and the port. The climb up to the windmills follows part of the official PR-CV 355 variante, a four kilometre loop which begins at the end of the marina in the port. The route is easy to follow; just keep an eye out for the yellow/white markers which are painted at regular intervals on rocks, posts and on one occasion on the road itself.

At the end of Calle Alfarrasi, which bends around almost 180º to the left, the route continues on into the rough shrubland, the path almost indistinguishable as it splits into several options around bushes and trees but whatever route you choose to take will be the right way and that is up. Take care on the rocky surface for the loose stones can sometimes give without any notice and the threat of a twisted knee or ankle is always there, lurking, ready to pounce on those whose concentration lapses momentarily. There is the occasional steep climb, forcing the use of the hands at times, before the tops of the windmills loom above and to the right, tantalisingly close but walkers are asked not to be tempted to take the direct route through the protected undergrowth; their patience will be rewarded.

The narrow rocky path joins a wider track for the final few hundred metres to the top. Emerging into a small rough car-park, the route continues to the left through a low wooden fence and past the information board for the viewpoint which is just beyond.

The path arrives at windmill 9 in front of which there is a stunning view down to the port and across the bay of Jávea to the headland of Cabo de la Nao in the distance. A few metres further on is windmill 8 which the Xàbia Viva heritage association was working to renovate a few years ago. In front of this windmill is an information board which describes the history of the buildings in several languages, including English. Just beyond is windmill 7, the last of the three windmills that can be accessed by the public and subject to some restoration in recent years.

The view is quite stunning from this vantage point. The whole of Jávea is spread out across the plain below; the port nestles beneath the protective arm of Cabo de San Antonio whilst the urbanisations sprawl off into the distance towards the modest crescent of the Arenal. In the very distance, Cabo de San Martín provides the southern boundary of the wide bay of Jávea, linking with the rolling hills of Rebaldi and Capsades which sweep along the southern edge of the plain of Jávea towards the low hulk of Tossal Gros.

In the distance are the antennas on top of the 436m high Puig Llorença whilst on a clear day one can glimpse Calpe’s 332m high Peñón de Ifach and, to the right, the jagged ridge of Sierra de Bernia rises to over 1,120 metres above sea level. And as our gaze continues to the right, there is the old town of Jávea and the fortress church of San Bartolomé with the wide valley of same name stretching off into the distance towards the mountains inland.

Between the two windmills, there is an obvious path that drops down to traverse across the slope below another three privately owned windmills. The path is rocky and can be quite slippery in places so care should be taken. After just a few hundred metres, it emerges onto a narrow road and the route continues to the left, following the road as it curves around.

Whatever route you take, the route continues along a stony wide track that appears to lead nowhere except to a number of private dwellings. However, just before the track apparently ends in someone’s driveway, a narrow path disappears into the trees to the right, skirting the boundary of a house on the left and affording some great views across a narrow valley towards Montgó with the Jávea-Denia road snaking along its slopes.

Those with sharp eyes may notice a white stone cross across the ravine, a memorial to local people who were killed during the Civil War by being thrown into a deep cave; we shall visit this on another occasion.

As the path emerges from the undergrowth, it widens and then drops down quite steeply; the hillock of Santa Llúcia is obvious with its modest white chapel just about visible on its summit. As the path curves to the left, the old town comes into view again; the blue-domed church of Calvario stands out.

The wide path drops gently along the slopes with the wide plain of Jávea once again opening up to the right. Follow the path all the way to its conclusion where the route rejoins the tarmac at the end of the cul-de-sac of Calle Azuébar. At the end of the road, turn left into Calle Calderón which drops steeply through the urbanisation of Puchol and follow this main thoroughfare all the way to the bottom.

Cross the bridge at the bottom and the road climbs slightly as it continues towards the old town. Take the first left into Camí de Bolufer and follow all the way back to the start-point.

“An unfree mind is just like a windmill inside the bell jar.”