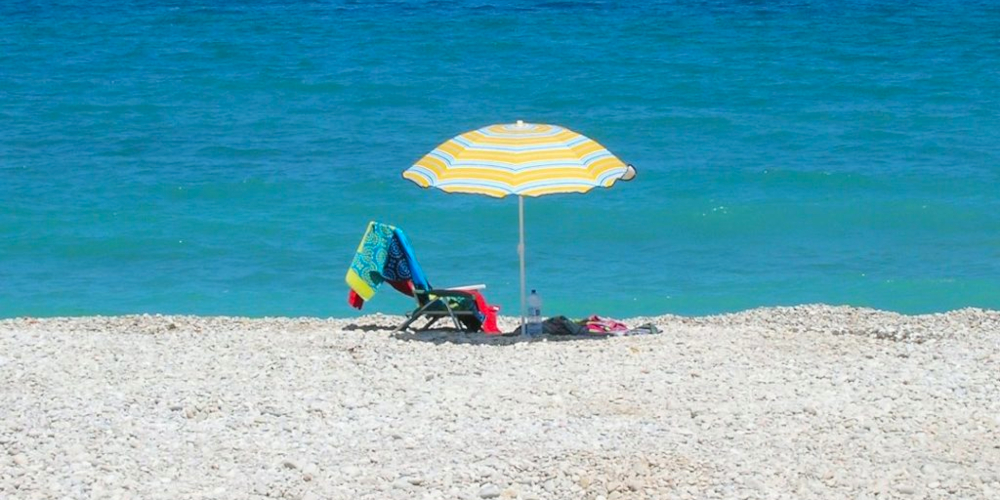 Xàbia boasts some of the best beaches on the eastern coast of Spain, including one which has consistently featured at the top of national polls. Here is our simple guide to the beaches in Xàbia.

During the 1950s, an Orthodox Christian priest called Monseñor Casiano used to spend his summers in Xàbia. He took to bathing in the sea from a beach that now takes his name: Playa del Pope. Residents would watch him remove his grey robe, wide cloak and hat to take a dip in the crystal clear waters. Over the last half a century, the beach has all but disappeared, swallowed by the sea and buried beneath rocks falling from the steep cliffs above it and it has been effectively closed to the public since 2014.

This pebble beach is the main bathing area in the port and consequently it can become very popular during the high season. Its crystal clear waters drop steeply into the blue deep and it’s a decent place for sports swimming and training. A lifeguard service exists during the summer and there are parasols and sunbeds for hire throughout the peak season. And within a few seconds walk from the water there are numerous bars, restaurants and shops to enjoy whilst a popular craft market enlivens the promenade each evening during the summer.

Juan Serrat was a businessman from Benissa who set up a soda business on this small beach, eventually building a small house next to the sea which is still standing and is better known these days as ‘La Siesta’. The pebble beach is now called ‘Playa del Benissero’ and is very popular with local residents as it doesn’t become as busy as other beaches in Xàbia. Due to its exposed position, it is a magnet for surfers taking advantage of the rolling waves that often sweep in from the wide bay. As the sun sets behind the houses, residents often arrive loaded with tables and chairs to enjoy dinner under the stars and take advantage of the cooling evening breezes.

The Arenal is the biggest and the only sand beach in Xàbia, a golden crescent almost 500m in length in a small natural inlet which has become the town’s entertainment centre full of bars, restaurants and entertainment venues to suit all budgets. The waters close to the shore are shallow and perfect for family bathing whilst the beach offers zones for volleyball, basketball and football as well as recreation areas for the kids. Parasols and sunbeds are available for hire whilst pedalo boats can be hired for an energetic spin around the bay. At nightfall during the summer, market stalls are set up along the wide promenade which is now named after tennis player David Ferrer, a favourite son of Xàbia.

Cala Blanca and La Caleta are two popular bathing areas at the southern end of the wide bay of Xàbia, about ten minutes walk from the Arenal zone. The two are connected by a track winding its way along the coast beneath the white cliffs which give the area its name, even passing through them. Being mostly rock, the waters are crystal clear and abundant with sea life which means that the coves are very popular for snorkelling and fishing. It also means that good footwear is recommended whilst mats or sunbeds would give more comfortable sunbathing. Be aware though that these beaches are not covered by lifeguards. Parking is difficult during the high season.

The secluded rocky beach can be accessed from La Caleta by picking your way carefully along the rocks at the water’s edge. The Lambert family from Switzerland moved to Jávea in 1920 and built a house in the Portitxol area of the town. Beneath the house there is a small secluded rocky cove that became known as the ‘Cala de Francés’, the French Cove, although the family were Swiss but spoke French. The beach has become a favourite haunt for snorkelling, its deep, crystal waters containing an abundance of life. And since the closure of the Ambolo beach, its seclusion has meant that Cala de Francés has also become a destination for those who prefer to relax and bathe ‘au natural’.

The deep blue waters off this secluded beach are extraordinarily popular with yachts and motor launches who have moored here for years, so popular that damage has been done to the precious sea grasses on the seabed, forcing the local council to promote a more sustainable mooring option. The rocky beach, which can be accessed from the Portixol Cross viewpoint via a steep path, is named after the fine nets that were put out each day at sunrise and sunset to capture sardines. Due to the difficult access, it doesn’t get too busy, even during the peak season.

Due to its popularity, peak season access to the beach is controlled by barrier to try and prevent the saturation it has suffered in recent years. Parking is limited to 60 spaces and its two restaurants often busy throughout the day. The beach itself is characterised by the old fishermen cottages which line its interior whilst its southern limit is defined by the high vertical cliffs that plunge more than 120 metres into the sea. And the famous ‘Blue Door’ has been a social media hit for the past couple of years. The crystal clear waters are perfect for snorkelling and scuba diving and there are many underwater routes around the island of Portitxol which sits just a few hundred metres off the coast.

The municipality’s only official nudist beach has been officially closed to the public since 2006 due to the danger of rockfalls and landslides from the steep cliffs. Barriers have been installed to prevent access but people still work their way around them to make the long walk down to the rocky beach, taking their lives into their own hands since the beach is not supported by a lifeguard or surveillance service. However the beach can be admired from the viewpoint of Ambolo, some 100 metres above the beach, whilst the elongated island of Descobridor is allegedly named after a local man who sailed to the New World with Christopher Columbus.

The cove of La Granadella is by far the most charming beach in Xàbia and it has been listed twice as the best in Spain by Antena 3. And due to its popularity access is now controlled during the peak season, especially after parking on the dry river bed was prohibited; available parking is limited to 190 spaces. The deep clear waters are perfect for snorkelling and scuba diving with several underwater routes available. There are parasols and sunbeds available for hire as well as a lifeguard service whilst there are three decent restaurants offering rice specialties, cooling drinks and ice creams.

“At the beach, life is different. Time doesn’t move hour to hour but mood to moment. We live by the currents, plan by the tides and follow the sun.”