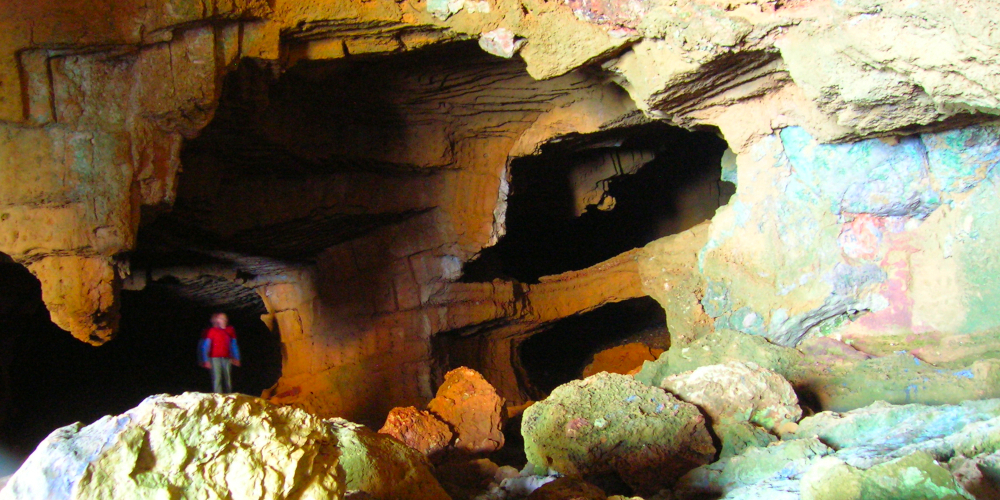 The quarry site consists of several large openings at sea level through which the waters of the Mediterranean often pour through to leave several shallow rocky ponds inside the main cavern. At the rear are a series of low tunnels which disappear into the darkness. The walls show obvious signs of having been carved by hand, the shape of various sized blocks that were carefully removed clearly visible.

Tosca stone is a calcareous sandstone rock formed many thousands of years ago and it is found in very few other areas of the world. The result is a golden rock of a unique beauty which has given many of the historic buildings of the region their characteristic charm.

The Cova Tallada was used as a source for these building blocks since the 16th century as was the coastline of Xàbia which still bears the scars of man, the blocks hewn out of the sandstone right up until the early 1970s when the industry was banned due to environmental reasons. Many of the villas built in the mid-20th century were also constructed using these blocks.

The carved cave has been a popular tourist attraction for a long time. There was once a carved inscription inside the main cavern which recorded the visit of King Felipe III in 1599 but it has long disappeared. These days it has become so popular that a visitor limit is put in place every summer to reduce the numbers of people who visit the cave by foot and by sea.

If you wish to visit between 15 June and 30 September, you need to pre-register online; any other time, it is open access. Those choosing to walk to the cave from both Xàbia and Dénia should be aware is not recommended for those who are not used to walking in a mountain environment; sturdy footwear should be worn and plenty of water should be carried.

See the related link below for a circular route which starts at the Sanctuary at La Plana; this path is not recommended for children and those unaccustomed to rough path walking since it becomes very narrow and steep with chains placed to assist in the descent.

The cave can also be reached from the Dénia side by driving across the plateau to the very end of the Les Rotes road where there is limited parking. A path leads along the coast to the cave with a few steep sections and a couple of steep drop-offs which might prove difficult for nervous visitors although there are chains attached to the rock to provide some sense of security.

If you choose to walk to the cave by either route, you should be aware of the following advice:

If you wish to access the cave by kayak, you should use an authorized active tourism company to do so.

How to get the most out of visiting the Cova Tallada