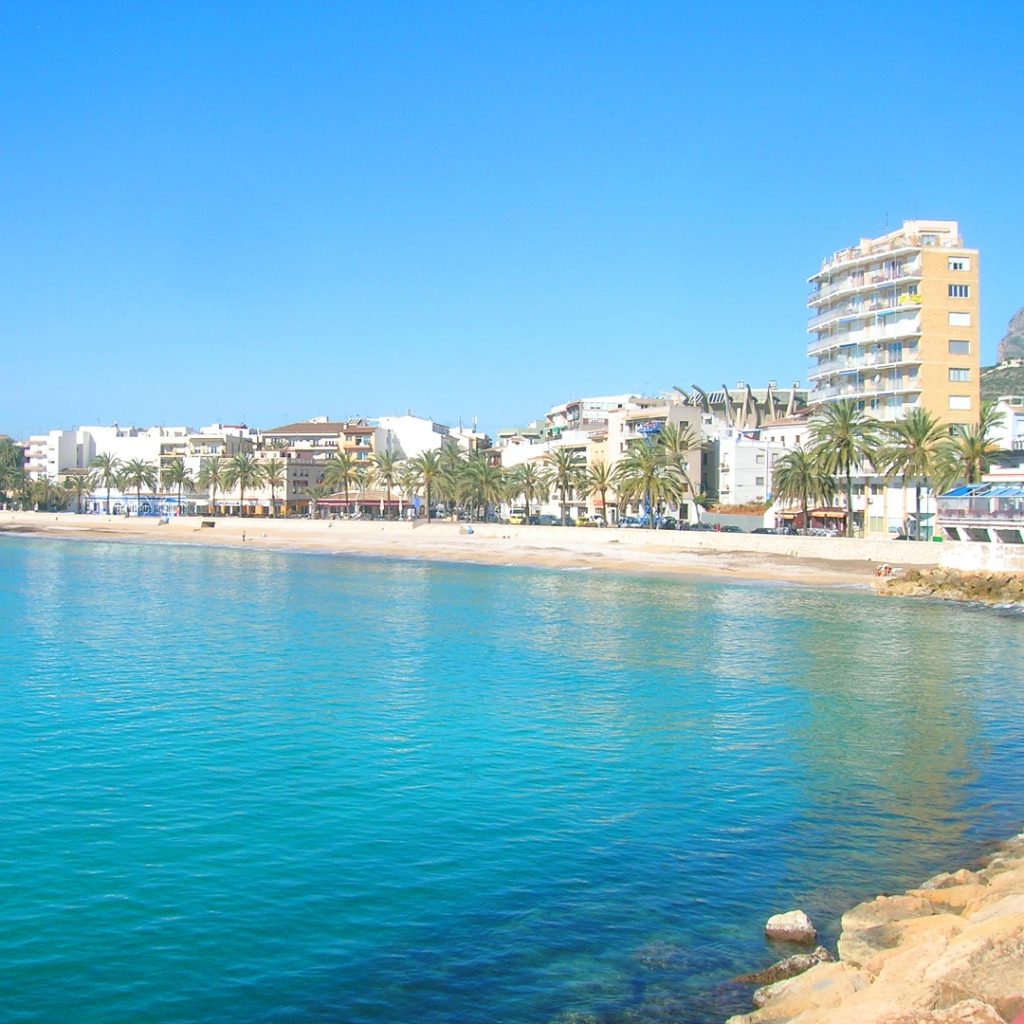 Although there is evidence of a harbour of some sort dating back to the 15th century, the port area of Jávea only started to become more prominent during the 19th century as the town expanded after the tearing down of its restrictive defensive walls and the lucrative raisin export trade exploded. The first recorded jetty and pier appeared in 1871 and, when the raisin trade collapsed in the early 20th century, the fishing industry became more dominant. The current port area was developed during the 50s and 60s.

In recent years there have been a number of proposals by private companies and the regional government to enlarge the harbour, which is managed by the Generalitat Valenciana, the last rejected by the Ayuntamiento de Xàbia in 2008. With expansion receiving the cold shoulder by the people of the town, the latest plan has been to re-organise the existing port area.

The port is a popular place to enjoy the sea with excellent restaurants and bars serving some of the best seafood right from the bay just a few metres away. It’s a quieter option to the livelier Arenal zone although that relative peace is shattered during the summer when the Moors and Christians arrive in town with their colourful costumes, swaying music and ear-shattering explosions and then a few weeks later when the people of the port zone honour their patron saint Mare de Deu de Loreto with celebrations that include bull-running on the harbour walls.

Click here for our directory of restaurants and bars in Jávea which includes several quality options in the port.

Parking is limited right in the centre of the port; there are some parking bays in Avenida Jaume I and in front of the Miramar Hotel but vacant spaces are very rare.

There is a new municipal parking zone just outside the port area where Avenida del Puerto meets Avenida de Lepanto which was opened in 2017. It’s no more than five minutes walk to the promenade and is definitely the better option for the busier summer months and during the fiestas of Moors and Christians (July) and Mare de Deu de Loreto (August / September). It has recently been renovated to provide a more permanent and secure parking zone.

There is another rough open car-park in Calle Santisimo Cristo del Mar and there are two smaller car-parks in the Port de Xàbia both of which involve driving through the port zone and following the one-way system; it’s a nightmare during the summer months and gets full very quickly so we wouldn’t even bother trying unless it was absolutely essential to try and park right on the seafront.

Another option is to park in the dual-carriageways of Avenida d’Ausias March and Avenida de Augusta from where it is just a few minutes’ walk into the port.

The final option is to park on the stones next to the bridge over the Gorgos from where there is a pleasant few minutes’ walk along the promenade.

The port can be reached by public transport from the historic centre and the Arenal. The only stop is in Avenida Lepanto (both ways) which is about 5 minutes’ walk from the beach of La Grava and the social centre of the port zone.

The Tourist Info Office is based in the blue and white building along the promenade of the beach, right next to Restaurant Posìt. The office will be able to provide advice of what to do and see in Xàbia whilst it also offers maps and brochures. The staff speak many languages, including English.

At some 275 metres in length, this pebble beach is the main bathing area in the port and consequently it can become very popular during the high season. It is one of Xàbia’s treasured Blue Flag beaches and its crystal clear waters drop steeply into the blue deep and it’s a decent place for sports swimming and training. A lifeguard service exists during the summer and there are parasols and sunbeds for hire throughout the peak season. Within a few seconds walk from the water there are numerous bars, restaurants and shops to enjoy whilst a popular craft market enlivens the promenade each evening during the summer.

The distinctive shape of the Iglesia de Nuestro Señora de Loreto dominates the port zone, a prime example of avant-garde religious architecture. It was inaugurated in 1967, built of reinforced concrete with a single nave and oval-shaped floor plan which means that it has no corners. The design won a National Architecture prize in 1969 and is considered one of the most accomplished modern temples alongside Liverpool’s Metropolitan Cathedral (1967) and the Cathedral of Brasilia in Brazil (1970).

The red pine ceiling has been designed to resemble a keel, representing the fishing boat, whilst the twelve supporting columns are dedicated to the twelve apostles and appear to be holding the boat above stormy seas. Indeed the church was funded by local fishermen who, caught in a huge storm out to sea, pledged that they would build a special new church to their patron saint if their lives were spared the turmoil. Inside there is very little decoration apart from the large figure of Christ suspended above the altar. The church is open from 9.00am to 8.00pm and it’s free to take a look but the church will always accept a donation to assist in its work.

The Paseo Marina Española is a popular pedestrian promenade stretching some 250m from the Triana bridge into the heart of the port zone and lined with excellent restaurants offering some great views across the bay.

Tables and chairs from these establishments used to line the seawall but were removed in 2011 after an edict from the Ley de Costas prohibited them. There was protest by some residents whilst others welcomed the chance to be able to enjoy the promenade freely and it remains a very popular place in the port with reservation essential.

The Casa del Cable is located along the promenade and the original construction was built in 1860 to house the telegraph station which linked the mainland to the island of Ibiza by a submarine cable. It was also used as a chapel to provide religious services to the fishermen and to store the statue of Nuestra Señora de Loreto.

It fell into disrepair during the latter half of the 20th century but has been recently restored, although the only obvious original structures appear to be the columns on the front of the building. It is now an exhibition centre with regular expositions throughout the year.

Cine Jayan has been showing films since 1950 and has become a benchmark in the region of the Marina Alta. Located just a minutes’ walk from the seafront in Calle Santisimo Cristo del Mar, the cinema shows films in Spanish and in the original language in a format known as ‘VOSE – Versión Original Subtitulos Espanol‘ which means that whilst the audio is in English, there are subtitles in Spanish at the bottom of the screen. This format makes it a popular evening out for the British market with the latest blockbusters arriving in Xàbia, often as soon as they are released.

Tickets, which are priced at 6 euros, can be bought at the ticket office on the day or online via the Cine Jayan website on the page of the selected film. There are discounts for senior citizens on Tuesday. During the summer months, there are screenings on the open terrace, the film projected against the white wall of the building whilst the audience sits in plastic chairs. It’s a fun event for all the family.

The large white building at the entrance to the port area is the auction house where the fresh fish is landed and immediately put up for auction to independent buyers and representatives from restaurants across the region. It used to be done verbally but it’s all done electronically these days. Members of the public are not normally allowed inside the building but you can peer through the glass to watch what’s happening. Be aware that when the fishing boats come in, it’s a chaotic scene on the harbour and it’s best to keep clear and watch from a distance.

On the southern end of the building, there is the fish market, a modest sized shop selling the very freshest of fish and seafood. It’s normally open Monday and Friday between 8.00am and 2.00pm then 4.00pm until 9.00pm.

At the northern end there is the famous Bar Cantina which serves a wide range of tasty dishes, including a renowned paella that many consider the best in town.

Club Náutico de Jávea is a renowned private yacht club based on the far side of the harbour below the steep cliffs of the San Antonio headland. The clubhouse dates from 1964 and it has been expanded since to include a swimming pool and a very popular restaurant which is open to the public.

The club runs a very successful sailing club, especially for young hopefuls and hosts many regattas throughout the year, including its famous summer sailing week. It has also provided many talented sailors to regional and national associations who have competed world-wide, always with Xàbia in their hearts.

At the end of the port road is the Playa del Pope, although sadly nothing much remains of the beach which has been reclaimed by the sea in the past couple of decades whilst landslides have made the zone quite dangerous to enter. However it is still a great place to admire the steep dramatic cliffs of San Antonio.

The Playa del Pope was named after a Russian Orthodox priest who lived in the town between 1898 and 1965 and used to come here to bathe in the clear Mediterranean waters every day, even during the cooler winter months.

From the end of the harbour, close to Playa del Pope, a path winds its up way up the southern flanks of the San Antonio headland, almost 2 kilometres of relentless climbing that rewards the effort with some stunning views over the port zone and across the bay of Xàbia towards the Arenal and beyond. Take plenty of water with you if you are to attempt what is an easy climb but no longer has any shade from the hot sun after the 2014 forest fires.

The section forms part of the PR CV-355 path which links to the summit of Montgó; click here for a description of the full route.

Restaurants in the Port zone
Link to the Restaurant Directory