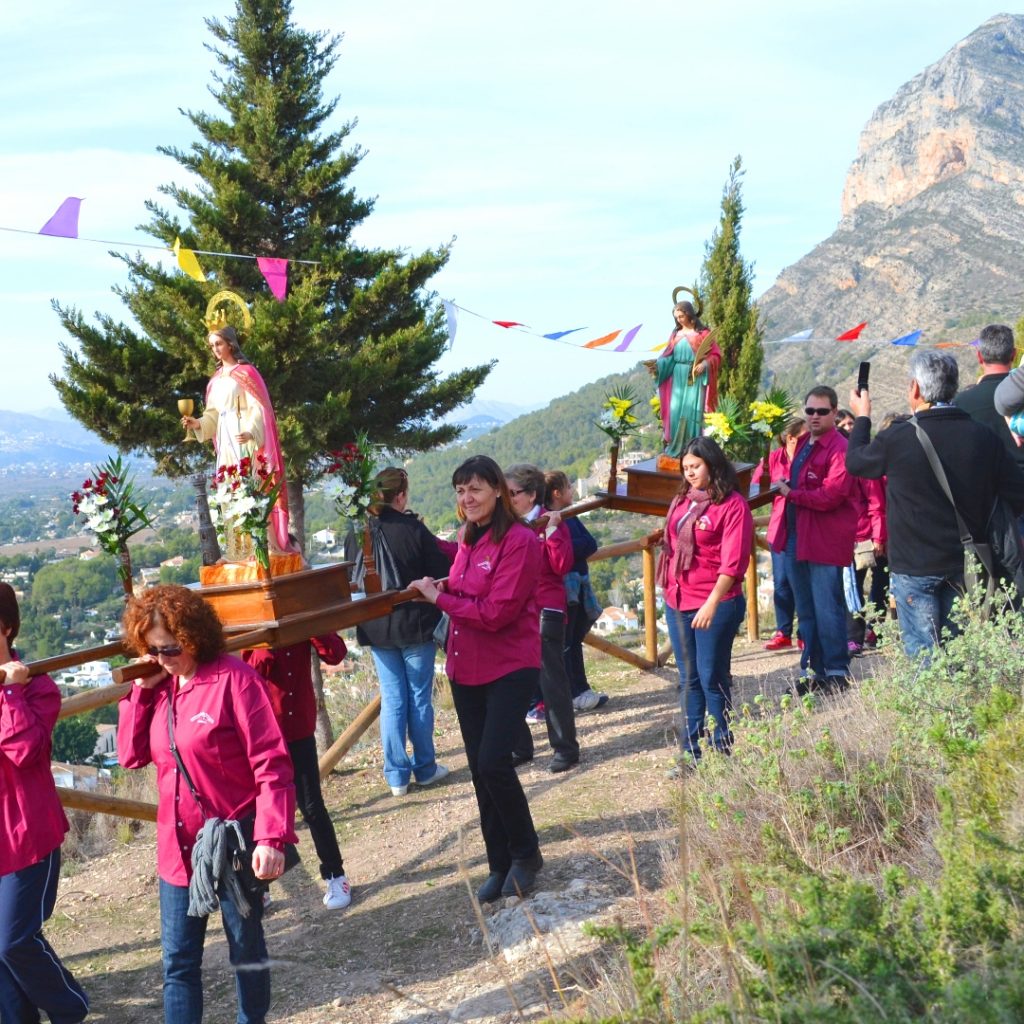 Twelve days before Christmas Day, the first real sign of the onset of the festive season in Jávea is the fiesta of Santa Llúcia on December 13th. It is a modest celebration, barely noticed by many who live in the town, especially if it’s a working day when shops and businesses are still open and students still go to school. However, for a handful of dedicated people, it’s just as important a festivity as those honouring San Juan or the Virgen of Loreto and this is a special time for concerned parents with children who are suffering from problems with their eyes for they often ensure that they make the pilgrimage to the top of the hill to honour the patron saint of the blind and foster hopes of recovery.

In ancient times before calendar reform, the date coincided with the Winter Solstice and the start of the lengthening of the days. It became symbolic for the struggle between light and dark, good and evil. For the Christian faith, it heralds the onset of the celebration of the birth of Jesus Christ, the “bringer of light” to the world, and often marks the start of Christmas celebrations with the appearance of the nativity scenes and decorations in houses.

The fiesta has its roots in pre-Christian celebration of Midwinter, an observance of the Winter Solstice and the “rebirth” of the sun as daylight begins to lengthen again. The date is linked to the unreformed Julian calendar with December 13th as the longest night of the year. It is particularly celebrated in the Scandinavian countries where there are extreme changes in daylight hours between the seasons. The significance to the Christian faith, which often adopted pagan celebrations, is the annual struggle between light and darkness. Often seen as the start of Christmas preparations, it sometimes marks the inauguration of the nativity scenes (without the baby Jesus of course; he has yet to arrive to “bring light” to the world).

Although there are a number of special events that take place before the main festivities, including a special mass to Santa Barbara on the previous Sunday, the celebrations begin on December 12th with an informal parade by the commision of loyal adherents which organises the Santa Llúcia celebrations. It tends to be a modest gathering of some 40 or so people but there is a wide range of ages from the very young to the very old.

A band leads the way with a selection of traditional songs and they are followed by representatives from the local council and the members of the organising committee who carry baskets filled with delicious doughnuts and bottles filled with refreshing Mistela wine which they hand out to the neighbours peering out of their doors and windows as the procession passes by.

The cavalcade travels through the dark narrow streets, the relative peace shattered by the thundercrackers and sky rockets thrown with some design by those taking up the rear. After an hour or so of walking in which the procession has visited the many districts of the old town, the parade arrives in the Calle de Santa Llúcia where the small shrine has already been decorated with flowers.

More cakes and small plastic glasses of Mistela wine (and maybe even something a little stronger) are handed out to everyone present before a long string of loud bangers is laid out along the road  surface and set off, a huge cacophony of noise that fills the street with smoke and debris.

The following morning, much of the neighbourhood has already been woken by the traditional ‘desperta’ in which thundercrackers and sky rockets break the early morning silence and almost overshadow the music that accompanies the procession. Even now, a number of people have begun to make their way up to the top of the Tossal de Santa Llúcia, the little hillock that sits above the old town to the north and on top of which sits the small chapel of Santa Llúcia.

In the centre of town, the organisers of the festivities gather outside the ancient church of San Bartolomé and, with the thunder of rockets contrasting with the delicate traditional music of the Xitimitabs, they begin the ‘romeria’ the pilgrimage to the chapel, a small procession which winds through the town and then climbs up the winding narrow track to the summit of the hill and the colourfully-decorated modest chapel square, the bell ringing out across the plain. Hot chocolate and cake await those who make the effort, which include a healthy number of schoolchildren which should ensure that the traditions continue.

At 11.00am – more or less – a special mass begins inside the chapel, so filled to the brim with observants that people are forced to mill around outside, kept in touch with the proceedings inside by a speaker system. Shortly before midday, the bell rings again and the explosions of rockets ring across the plain below as the images of Santa Llúcia and Santa Barbara are carried out of the chapel and processed around the track that surrounds the building, accompanied by the music of the Xirimitabs. As the images are returned to their special niches inside the church, more fireworks are ignited and everyone now looks forward to the beginning of the Christmas celebrations.

The chapel of Santa Llúcia sits on top of a low conical hill just to the north of the town, the Tossal de Santa Llúcia, some 162 metres high. Documents suggest that the current chapel dates from the 17th century but historians are still uncertain because there is evidence that it may have been built two or three centuries earlier during the Christian reconquest of the area.

It consists of a single rectangular nave with a gabled roof and a central arch of tosca stone. The building would receive several additions since its original construction, including the adjacent rooms which were added in the 18th century, the naya which covers the main entrance to the chapel and the modern square in front of the building, the latest addition to this historic site.

The current bell was installed in 2003, replacing the original 15th century bell, considered one of the oldest in the region which was believed to have once been located in the ancient chapel of Santa Anna, built in 1502. This old bell is now displayed on the ground floor of the Soler Blasco museum.

The bell usually rings just once a year on December 13th, one of only a couple of days a year when the chapel is open to the public (the other being to host the final performance of the Xàbia Folk Festival in May). There is a family which lives close to the hill that has been responsible for maintaining the building throughout the year.

There is a story in which the old speak of a ‘shack’ on top of the hill that was built “in ancient times” to serve as a refuge for those suffering from leprosy and other contagious diseases. A well was dug to provide water for drinking and for ablutions. A couple of times a week, families would climb to the top of the hill to bring hot food and necessities for their kin. At first the other residents had no desire to ascend to the top for they considered that leprosy was contagious. However, once it was discovered not to be so, they began to climb to the top themselves. An altar was built inside the chapel, an underground cistern was dug and the track which led to the top was widened. Over time, the chapel became devoted to Santa Llúcia since many of those who made the ascent would ask for their sick eyes to be healed.

The greatest attraction of the chapel is both its peace and tranquility as well as its superb panoramic views in all directions. To the east, looking across the iconic blue-domed chapel of Calvario, are the blue waters of the Mediterranean filling the wide bay of Jávea stretching between the Cabo de San Antonio to the left and the narrow finger of Cabo de San Martín / Cap Prim to the right. In between the town of Jávea sprawls across the coast from the traditional working port to the tourist area of the Arenal overlooked by the tall fortified church tower of San Bartolomé.

To the south are the low hills of Capsades and Tossel Gros marking the southern limits of the municipality with the Puig de Llorença and its communication antennas beyond to the right of which you can make out the church of Poble Nou de Benitatxell. To the west looking inland are the high mountains of the interior to where the Moors who once lived and worked in this land fled during the Christian reconquest. In the foreground is the wide valley of San Bartolomé, the garden of the Marina Alta. And then, walking around the perimeter path through the trees, an amazing view of Montgó reveals itself, an iconic image that features in many books and tourist pamphlets about Jávea.