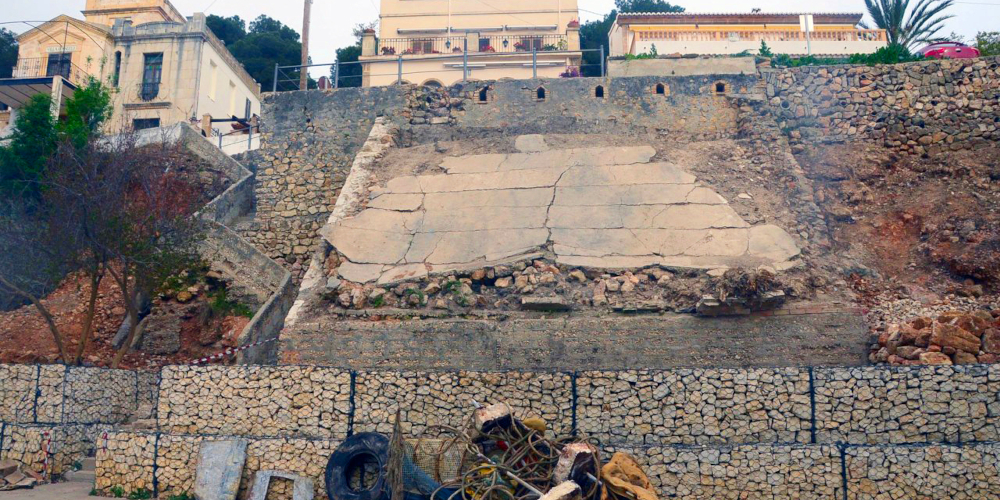 In the midst of the Spanish Civil War, during the winter of 1937, an aerodrome with two landing strips and a small port were built in Xàbia, given the municipality’s good strategic location next to the sea. The construction of these two infrastructures led, inevitably, to the town appearing on the maps of possible sieges and assaults and, therefore, placed the population at risk. Any area where any type of building conducive to combat or defensive use was located was likely to become a scene of conflict between the two opposing sides.

The threat of a possible attack forced the recently constituted Municipal Council to build various shelters to protect the civilian population in the event of a bombardment.

The shelters that were built were located in Raval de la Mar (the area where the Red Cross headquarters is currently located), Terra Grogueta (Avenida de Alicante), on Calle Roques near the Casa Abadia, in the former convent of the Agustinas (now the indoor market), in the Placeta del Convent next to the start of Carrer En Forn and another in the Fielato (Avenida de Ondara). According to the information provided by the municipal museum, they were very precarious constructions, of very small dimensions, dug into the ground, without coatings and, in some cases, such as that of the old convent, tosca stones from the ruined building were used. The vulnerability of these spaces was such that they could only protect the population from the shrapnel of the bombs, not from a direct strike on the shelters.

The “refuge” of Aduanas del Mar

The structure located under Calle Caleta facing the fishing port and built during the war has, until now, been considered to be a shelter to protect the population during bombing. However, as the municipal archaeologist, Ximo Bolufer points out, the study and subsequent recovery project carried out by the architect Pablo García, suggests that it was a space dedicated to the storage of torpedoes used for torpedo launchers. Its situation and the characteristics of its layout suggest this function.

According to the museum, another witness report of the time, the one reflected in the diary of Ti Vicent de Gràcia, backs up this suggestion. he wrote: “I was so hungry that, on September 15 (1938), I began to work in a shelter close to the base of torpedo boats in the sea in the Caleta del Petorrí, to store machines that load torpedoes, and they gave me 13 pesetas and two chuscos or loaves, and I would go to work for the loaves, not for the money, as when I started I was so skinny that I couldn’t stand upright, but soon after I was better, I worked 4 months ”. A sincere story that makes visible the precarious state of the population of the time.

Another direct testimony of the construction is that of Amadeo Sivera Ros (95 years old today) who worked on it when he was only 15 years old helping Pep Soler Contrí (who, although his nickname was Petorrí, should not be confused with Bartolomé Soler, his son). According to Amadeo, one day, while they were working inside their galleries, they heard a loud noise and ran out. Inside, there had been a collapse and the boards and wood that were being used to make the formwork fell on Pep. They managed to get him out alive, but the injuries caused caused him to die a few days later. He was 42. So it proves that this warehouse was built in an area that is very unstable geologically. By the end of the war, the shelter was never used.

The shelter has a rectangular structure of approximately 10 × 6 meters, located in the natural slope of La Caleta. The structure is formed by a front wall of Portland concrete blocks, sand and gravel, and is 4 metres thick. In its central part, it is made of solid brick and the entrance to the interior is located through a semicircular arch.

The external side walls were built with irregular blocks of limestone and pieces cut from the slope itself that protrude generating a large unevenness that was filled with stones and earth and on which a large concrete slab was built covering the entrance to the refuge. The staircase that connects the upper part with the port dates from then.

Once inside, you access a tunnel of just over seven metres in length until you reach a room from which two parallel galleries extend further into the hill, separated from each other by a robust wall. The gallery on the left was crowned in its final section by a lowered vault, while the one on the right has a side vault from which another narrower corridor of 12 metres in length that connects to a hole located about 25 meters from the entrance. According to the study, this hole was supposed to be another access or exit door, but it was never finished.

The same happens with the two main galleries that should have gone further into the mountain, but were never finished. The builders had started to dig a short corridor of less than four meters located at the end of the entrance tunnel, on the right, which forms a right angle.

The walls of the entire structure were covered with flat bricks with portland cement and gravel used to strengthen them. The intersection of the galleries was solved by building the corner vaults. In total, the structure has a depth of 24 metres.

In the 50s or 60s, the entrance tunnel was used by the sailors of Xàbia as a warehouse. Now, almost 80 years later, the study and renovation of the surrounding area have made it possible to salvage one of the few examples of Spanish Civil War architecture that are preserved in Xàbia. The Soler Blasco Municipal Museum has raised the possibility of recovering this highly relevant piece of history in the port area to publicize this structure and tell the story of a great national confrontation from a local level.