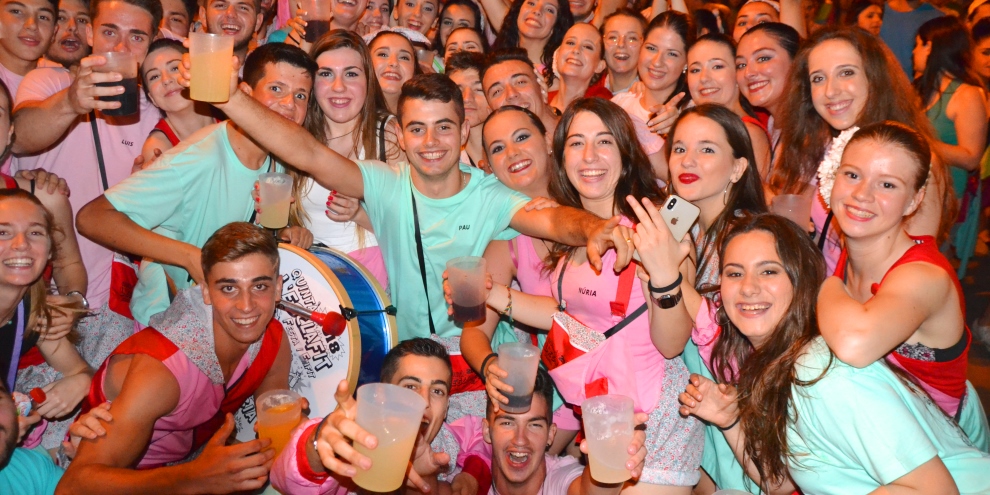 Taking centre stage during the Fogueres de Sant Joan is the QUINTÀ, a group of young people who celebrate their coming of age during the year.

The tradition has its origins in the 19th century when young men who had reached 20 years old, the age of eligibility for compulsory military service, were called on to serve in the armed forces. Conscription very much depended on the demand for soldiers at the time but it was normal that every fifth man was called up, hence the name for this conscription: “quinta”.

Particularly in rural Spain, these young men held a communal meal from food that they had collected from their family and neighbours, often painting a special message as a memorial of their leaving youth and progressing into adulthood. As the years passed, the quintos would hold annual dinners as reunions to remember times past.

As social customs changed, the tradition began to include girls of the same age and became less directly relevant to military service. (Conscription ended in Spain in May 2001.) These days, for youngsters living in Jávea, it signifies their effective passage into adulthood.

With the ashes of the previous celebrations barely cleared away, the town hall sends out invitations to young people registered on the Padrón who will be turning 18 the following year, inviting them to form that year’s Quintà. Not everyone accepts for it is an expensive obligation – for the girls, the dress alone can cost up to 2,000 euros and, if not passed down by the family, they often have several of them – but a fair proportion of those invited find the money to become part of the year’s special group for it is a real honour to represent the town as the quintà. And it’s not just the native Xabieros who are invited; in recent years, foreign residents have taken part including British and Dutch youngsters.

The town is introduced to the new Quintà in a special ceremony during which the members of the group elects its two presidents – one boy and one girl – and the Reinas de les Fogueres, the Queen and her ladies-in-waiting. And thus, a life-long social association begins.

A few weeks before Sant Joan kicks off in mid-June, there is a formal gala dinner for the quintà and their family and friends. The Fogueres queen and her ladies-in-waiting of the previous year also attend and are thanked for their contribution and representation of the town before formally handing over the reins at a special and emotional ceremony a week before the main festivities begin known as the Proclamación.

The quintà has great responsibility for they are charged with organising and participating in the Three Kings and Carnaval parades in that year.

Some years ago, when we were holidaying in Jávea during the Sant Joan celebrations, we visited the tourist office and were told that the ‘quintàs parade’ was really not of any interest to tourists and that we shouldn’t bother; we’re very glad that we ignored their advice and discovered an amazing evening of extreme partying.

The ‘Día de les Quintades‘ begins early with the ‘despertà’, the noisy early morning wake-up call with music and thunderous firecrackers that rouses the willing – and the unwilling – from their slumbers and it is traditional for the ‘quintà‘ celebrating its 25th anniversary to take part in the occasion.

From mid-morning, the quintàs start gathering in the Placeta del Convent. Some have enjoyed a hearty breakfast in one of the many bars throughout the historic centre, venues they may well return to later in the day. The more experienced are pacing themselves for it is going to be a long day. The young, well, they are young and they will soon learn and understand that Quintades Day is a marathon, rather than a sprint.

The parade more or less follows the same format. The quintàs have gathered in various states of sobriety and although it may not look like it, they depart in a defined order, herded into position by slightly frazzled commission members. Often accompanied by their own ‘charanga’ brass band the noise can become quite terrific – and so does the atmosphere. Affectionate hugs and playful slaps are the order of the day for many of these people haven’t seen each other for at least, ooh, two hours.

Popular fiesta tunes fill the air, the same tunes that are often heard throughout the ten days of festivities. It’s a classic example of organised chaos. Embracing like reunited long-lost friends, the ‘quintos’ share the contents of those plastic bottles that you just know contain much more than simple pop, milling around quite aimlessly until they are firmly coaxed into some sort of order. The previous year’s ‘quintà’ tends to lead everyone else in the parade followed by the ‘quintàs’ celebrating their special anniversaries from those celebrating their 25th year and down through those commemorating their respective milestones of 20, 15, 10 and five years. The rest follow in some sort of order and then the newest quintà brings up the rear.

The parade heads towards the bull arena next to the bus station but there’s no bulls today. Instead there are fun and games with inflatables and water. And, of course, there is a bar. Which is busier than ever. It’s one giant reunion; Xabieros do literally fly in from all corners of the world to meet up with their friends.

After a couple of hours, everyone drifts away in different directions, heading back to their chosen bars and restaurants, those celebrating special anniversaries normally opting for a more formal venue such as Salones Carrasco. Open-air discos, charanga bands and loudspeakers blast music in almost every street. A siesta? You’ll be lucky.

As the sun begins to dip towards the horizon, the action transfers to the main square where an open-air disco begins to pump out the party favourites as well as a few modern classics. The volume is almost deafening at times, the music debatable. Sometimes there’s an added attraction such as a foam party or live drummers. The dancing continues as the sun drops behind Montgó; it’s a night for partying and it’s far from over.

The crowd swells; the special Fogueres Commission bar does good business as do the watering holes around the square. And then, at around midnight, the emphasis changes to live music, usually Spanish rock, on the big stage that has been set up on one side of the square. It’s loud but curiously infectious music, the large crowd in front of the stage swaying and singing along; everyone is determined to have a good time and there’s still a decent gathering as the music ends at around five in the morning. As the last notes disappear into the dawn, the determined have little option but to return home.

Whilst the Quintà is the central figure of Sant Joan, the peñas (‘penyas’ in Valenciano) are the heart and soul. These are friends who have formed themselves into groups with the primary aim of enjoying the fiesta together. They can vary in size from just a handful of close friends to a whole street of neighbours, taking over a vacant unit or someone’s garage as a communal billet for the duration of the fiesta.

Most if not all peñas charge an annual subscription to fund their activities; some friends throw in 200 euros each for the two weeks – but this does mean that their residence is not lacking for food and drink so they can leave their wallet safely at home.

The billets can officially open on a specific day, normally the day of the Pregón, however the peñas have already spent many days preparing them in order to be acceptable to the organising committee. Long gone is the spontaneity of finding an empty lot and using it as a party-base for a couple of weeks; billets have to have working toilets and at least one member of the peña over the age of 18 has to sign as the responsible person. Everyone likes fiestas but not everyone likes the idea of festeros using the road outside their billet or nearby rubbish bins as toilets; luckily those days have largely gone. Between them, the members of the peña take turns to cook and keep the place tidy.

There are many events in which the peñas take part, including the paella competition, the Grand Prix ‘It’s A Knockout’ contest and much more. A few groups are also be prepared to push aside possible hangovers and walk around town letting off firecrackers during the traditional despertà – the wake-up call – whilst some have raised funds to support events such as the bull-running and the great Nit dels Focs or will help to erect the fogueras – the symbolic bonfires – for the final night of celebrations.

Being part of a peña is an honour and without the hard work from them and the quintàs, the fiesta simply wouldn’t survive.

Click here to read more about Penya Com a Gambes, the special peña created by foreign residents to participate in the Fogueres de Sant Joan and the other fiestas of the town.