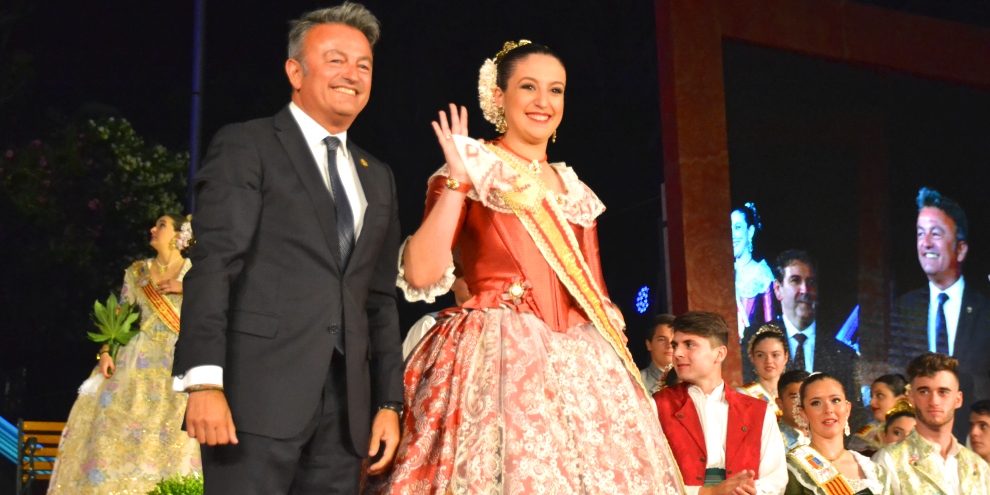 The Fogueres de Sant Joan de Xàbia kicks off with the Proclamación de las Reinas, the official presentation of the queens, their courts of honour and their escorts, all dressed in traditional elaborate dresses and perfectly cut suits. Everything is perfected down to the finest detail. The girls’ hair is styled in two traditional ways; either the fallero which are the Princess Leia-style buns on the side of the head, or the xabiero, which is on the back of the head. The boys shave close, get their hair cut, often in the latest fashion, and then dress in their traditional suits.

And it’s not just the quintos that are trussed up in their finest for the younger members of the community, the Infantil and Juvenil sections, are also an important part of the celebrations. Traditions start early and many of these kids can barely walk, let alone parade around the streets wearing the heavy traditional costume.

The proclamation is a long, testing affair in the Plaza de la Constitución, an official ceremony in which each festero is introduced to a large crowd of proud parents, supportive friends and curious onlookers. Recently the two ceremonies have been split over two days with the older quintos ceremony taking place on Saturday night and the children’s court presented the following evening.

Saturday is an exciting day for those main protagonists. Late in the evening, after a formal reception of the Fogueres Queen and her ladies-in-waiting and their families by the mayor inside the town hall, the quintos line up in pairs in the church square and, accompanied by the town’s band, they make the short journey to the Plaza de la Constitución where the steps have been converted into a grand stage in front of which are many white plastic chairs but it seems never enough for everyone.

After the formalities, during which the year’s ribbon is added to the Fogueres standard, the quintos are introduced in pairs, sweeping along the catwalks or appearing through the scenery on the stage to wave with some nerves at the many hundreds of friends, family and curious onlookers seated in the square.

Musical performances and dancing often divide the separate acts, long speechs are accompanied by tears as the previous incumbents bid farewell to bring their reign to an end and then the new court is presented, the new Fogueres Queen accompanied by her ladies-in-waiting.

It’s a hugely important and symbolic moment. The crowd often rises to their feet in her honour. The mayor steps down to assist her just in case she struggles with her grand dress as she steps slowly but surely towards the throne which takes centre stage. Her predecessor is also standing and they exchange pleasantries before the incoming queen finally takes her place on the throne, Xàbia’s leading representative for the next twelve months. Fireworks light up the night sky behind her as her ladies-in-waiting take their place by her side. Their predecessors leave the stage, their responsibilities finished at last. There are probably a few tears. There are always a few comforting hugs.

With the new court in place, they are honoured by a procession of guests, representatives from the other main fiestas in town, the Moors and Christians, the Mare de Deu del Loreto as well as those from surrounding towns: Gata de Gorgos, Poble Nou del Benitatxell, Teulada, sometimes even as far as Valencia and the great Fallas.

It’s a long evening and you have admire the stamina of everyone involved for most will rush home, get changed into something more comfortable and then return to the square for an open-air disco to which they will dance until dawn.

In recent years the younger Infantil court of honour has been the B movie for the grand proclamation day but from 2017 they have been given their own evening.

The youngsters, many of whom have only just been taking their first tentative steps, shuffle uncomfortably in their traditional costumes. Maybe there will be some tears as nerves kick in or someone doesn’t want to the hold hands with their partner. As the music starts, they parade in a long line from the Plaça de l’Esglèsia to the main square, some nervously holding the hands of the volunteers, others pulling ridiculous faces as their proud parents jog alongside taking photos.

As with the senior ceremony, the youngsters are introduced in pairs, most willingly, a few given a friendly but firm push as a encouragement. Once again, music, dancing, lighting effects and fireworks accompany the ceremony. There is more shuffling as the kids sit on the steps, a huge test of their patience through the speeches, before the Infantil Queen is introduced, the audience rising again as she walks down the aisle to the steps and takes her place on the throne and as the children’s representative for the next year.

And then it’s over. It’s been a testing weekend but it is all about tradition and no fiesta is complete without its formality.

El Pregón and the Singing >>