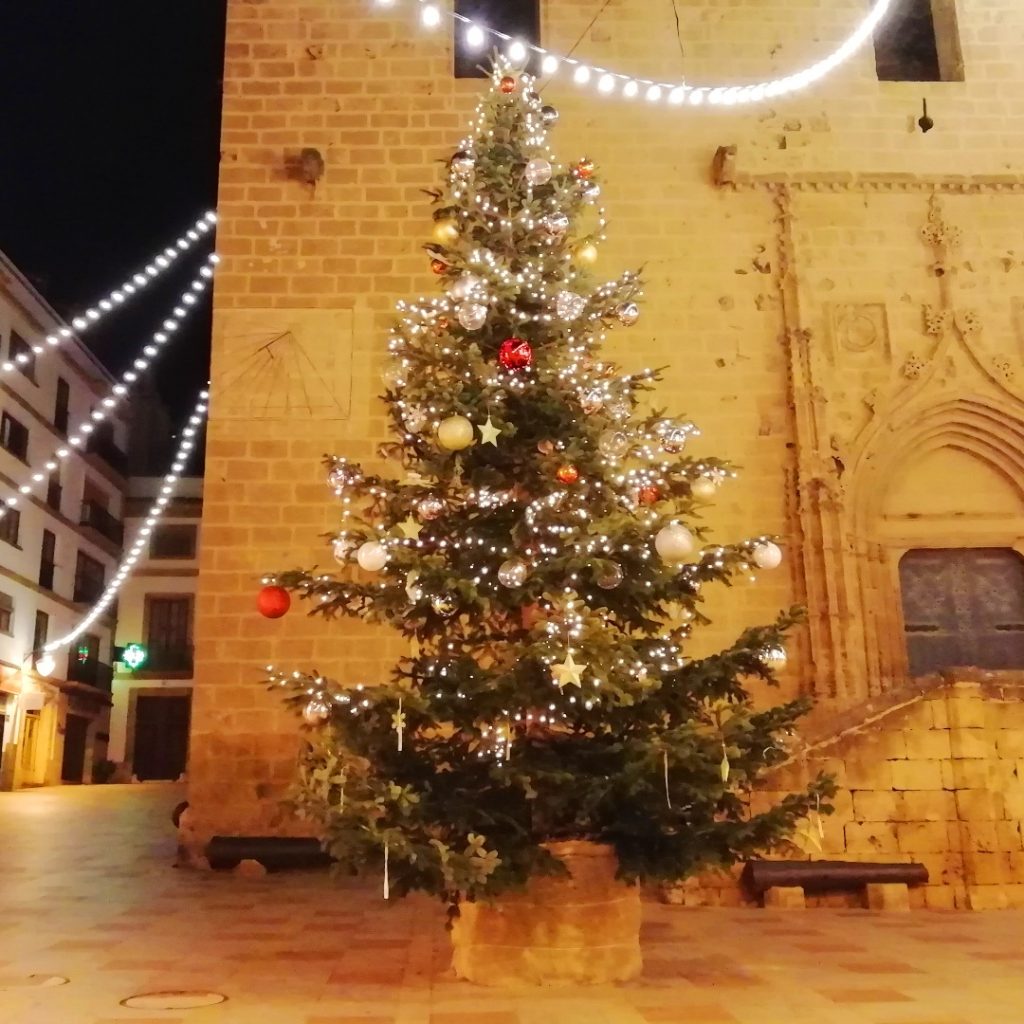 Christmas in Spain. It has never much of a commercial occasion as it has become in other countries such as the UK and the USA but it is rather special just the same. Traditionally the season begins on December 8th, a national holiday celebrating the Immaculate Conception of the Virgin Mary when Christmas lights are switched on and the decorations go up in the shops, bars and restaurants.

In Xàbia the season tends to creep up slowly. There is usually a modest festive craft market in the heart of the old town and in the port for the 6th-8th December ‘puente’ holiday and the fiesta of Santa Llúcia on December 13th – which falls twelve days before the day – always seems to bring on the festive feeling. In this article we describe what one can usually expect during the Christmas season in Xàbia and across Spain which, of course, runs several days beyond the excesses of New Year’s Eve.

The bélen is an elaborate nativity scene which stands pride of place in many private houses, quite often instead of the Christmas tree. Take a walk around the narrow back streets of the historic centre and you’ll spot many of them displayed proudly in the front windows of the houses.

There is also the unveiling of the municipal nativity scenes which are often huge creations put together by dedicated volunteers. People will spend lengthy periods of time scrutinising the model and it is often because they are searching for ‘El Caganer’ – the ‘crapper’ – which is a cheeky figurine crouching in a dark corner or under a shady tree with trousers down and backside exposed. It is a marvellous tradition that dates back to the early 18th century and is said to symbolise fertility as well as bringing good luck and prosperity for the year ahead.

In Xàbia the municipal nativity scene is normally located inside the municipal market in the heart of the historic centre whilst there is another inside the Centre d’Arts Lambert in the Casa de Tena in Carrer Mayor.

December 22nd is a much-anticipated day which could change the fortunes of a few lucky people, the day of the Christmas National Lottery, often known as ‘El Gordo‘ – the ‘fat one’. It is not only one of the oldest lotteries in the world having started back in 1812 but it is also the biggest with many high value prizes totalling more than two billion euros. Tickets cost 200 euros each so people tend to buy smaller shares in an individual ticket which are known as ‘décimos‘, essentially a 10% stake in the ticket.

With each number having several tickets known as ‘series’ and these series are often sold exclusively in certain areas, this often means that the whole villages can win the jackpot such as the lucky ticket holders in the Catalonian town of Vic which shared some 500 million euros between them. The draw itself is a long, drawn-out affair shown live on national TV, lasting several hours as children sing out numbers etched into small wooden balls drawn from large metal spheres on stage in the heart of Madrid.

Rather than Christmas Day, the night before is when Spanish families come together to celebrate the arrival of Christmas with a huge Christmas feast and it is common for many bars and restaurants close their doors once the sun dips below the horizon.

It was traditional to serve ‘pavo trufado’, turkey stuffed with truffles, but these days it’s normally roasted lamb or a suckling pig after an opening course of seafood or ‘entremeses’, a plate of hams, chorizos and local cheeses such as Manchego. In Catalonia there is a popular Christmas dish known as ‘galets’, huge pasta shells often filled with mince meat and floating in a meaty soup. The meal is often concluded with ‘turrón’, a toasted sweet almond nougat, or ‘polvorones’ which are sweets made from almonds, flour and sugar.

On Christmas Eve at 9.00pm, the Spanish Monarch gives the traditional Christmas message from the Palacio de la Zarzuela, much as Queen Elizabeth II does on Christmas Day in the UK. It is a tradition that began with General Francisco Franco in 1937 when he addressed “the fighters of Spain” on New Year’s Eve and continued until 1974. When Franco died in November 1975, his successor King Juan Carlos I moved the speech from New Year’s Eve to Christmas Eve, an attempt to distance himself from the dictator. Felipe VI made his first Christmas Eve speech in 2014. The message, which is on average about 15 minutes long, is broadcast live on TVE1 with other channels having the right to broadcast some or all of it. Since 2012 it has also been broadcast on YouTube and Twitter.

At midnight there is a special mass known as ‘La Misa de Gallo‘ – the ‘Mass of the Rooster’ – which reflects the notion that a rooster crowed on the night that Jesus was born. The church bells ring to summon everyone to the church, and one of the most impressive of these candlelight services is held in the monastery of Montserrat above the city of Barcelona when its choir is said to sing in “one pure voice”.

Sometimes people exchange small gifts at midnight but Papa Noel is not expected to visit on this night; the children will be waiting for the arrival of the Three Kings a couple of weeks later (see below). There is an old Spanish saying which says “Esta noche es Nochebuena, y no es noche de dormir” which essentially means that this is Christmas Eve and it is not meant for sleeping. However, in Xàbia the nightlife tends to be concentrated in the Arenal beach zone; elsewhere will be very quiet.

Christmas Day is a national holiday. Families often go out together for walks, visit friends or enjoy a festive drink in a bar before having a lunch together, sometimes in a restaurant but more often at home. In truth it’s one of the quietest days of the year in Spain.

December 28th is very similar to April Fool’s Day in the UK with newspapers and TV news channels running ridiculous but almost believable stories. Over the past few years javeamigos.com has joined in with the fun, publishing fake news stories such as the Arenal zone bidding for independence from Xàbia and the new parking charges for foreign-registered vehicles. However December 28th actually commemorates the day when new-born babies – the innocents – were massacred on the orders of King Herod in his attempt to kill the infant Jesus.

For the past few years, Xàbia has celebrated the arrival of a new year twice in one day! At midday on New Year’s Eve December 31st families gather in the heart of the historic centre to hear the bells chime twelve times and thus marking the new year on the other side of the planet. Segments of oranges instead of grapes are eaten, music played with maybe some dancing and the young children who might otherwise be asleep some twelve hours later are allowed to enjoy their own New Year’s Eve.

New Year’s Eve is another chance for friends and family to come together to celebrate the end of the old year and the arrival of the new. Bars and restaurants are often booked up long before the evening arrives. It’s expensive but the feast is often enormous with several courses. As midnight approaches, attention is often directed towards the TV which is showing the live broadcast from the Puerta del Sol in Madrid, Spain’s answer to Times Square. All eyes will be on the clock on top of the Real Casa de Correos building which has served as the marker of the arrival of the New Year in mainland Spain since 1962.

As the chimes ring midnight, the tradition is to eat twelve grapes, one popped into the mouth on each chime of the bells, and it is suggested that you will have good luck for the following year if you manage to eat all twelve by the end of the chimes. “Las Doce Uvas de la Suerte!” Some 80% of these lucky grapes are grown in the Vinalopó valley just a 100km or so to the SW of Xàbia. Supermarkets often sell small tins of grapes, already de-seeded, peeled and ready to go.

It is the custom to wear red underwear on New Year’s Eve – market stalls will be full of red lingerie in the lead-up to the end of the year – and such a garment has to have been given to you as a gift by someone else. The village of La Font de la Figuera, located some 90km due west of Xàbia, celebrate the arrival of a new year by stripping down to their underwear and running through the streets.

It is also traditional to drop a gold object into a glass of cava before the midnight toast to bring good luck; drink the entire glass after 12 o’clock and you’ll have good fortune. However if you’re looking for love, drop in a strawberry, cherry or raspberry. Also remember to kick off the new year by taking the first step after the bells chime with your right foot – and if you’re out for the evening, make sure you enter your home with the right foot first!

In Xàbia it has been traditional for many years for brave ex-pats to gather on the Arenal beach and run into the chilly Mediterranean Sea at 1.00pm, an apparently perfect cure for the hangover. But it’s all in a good cause as the event raises thousands of euros for charity. To be honest, it’s more of a ‘stand about’ than an actual swim but it’s a perfect community event to kick off the year, attracting several hundred courageous dippers every year.

The Christmas season ends with the arrival of the Three Kings and we explain more about this fantastic family event here.