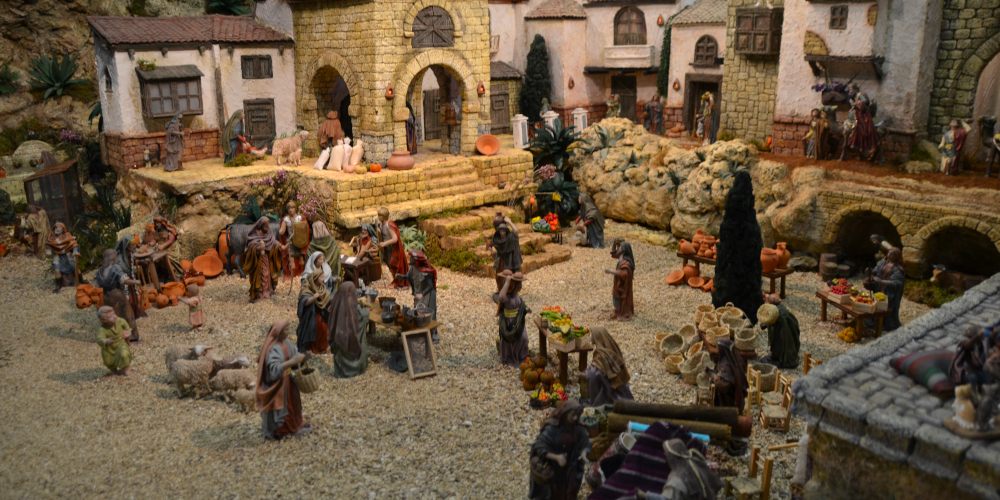 One of the main features of Christmas in Spain is the belén, the nativity scene which appears in the windows of houses around the town whilst larger versions commissioned by the town hall take over large spaces across the municipality. For many years, they took the place of the Christmas tree that is a central figure in other countries, particularly in the UK. Although decorated trees are starting to appear in town squares and houses in Spain, the inauguration of the nativity scene is one of the most anticipated events in the run-up to the festive period and has traditionally been something that the whole family comes together to create.

These spectacular creations depict life in Biblical times around the birth of Jesus Christ. The inspiration is, of course, Bethlehem (Belén in Spanish) where the Church of the Nativity has stood since 325 CE, built over the exact place where Jesus was supposed to have been born. It is said that the first nativity scene was created by San Francisco de Asis in a cave above the town of Greccio in Italy in 1223 to share the story of the nativity after visiting the Holy Land two years earlier. The town is now twinned with Bethlehem. Each year (in normal times), the town re-enacts the Christmas story with a live Nativity scene.

Static scenes became more common in the 14th century but one of the oldest can be found in the monastery in the village of Flussen in Germany which is said to date from the mid-13th century. The tradition was introduced to Spain by Queen Maria Amalia of Saxony in 1759 after she married Carlos III and moved from Italy to Madrid. Her treasured belén, which comprised of 7,000 pieces, moved with her and is said to have been the first in the country.

In the town of Mollina in Andalusia, there is a large museum dedicated to the nativity scene which is open all year. There are more than 70 belenes on show, both indoors and outdoors, and the museum is overlooked by San Franscisco de Asis who has become the patron saint of nativity scene makers.

Many towns and cities have a dedicated association which creates the municipal nativity scenes for the town halls. In Xàbia, we have the Betlemistes de Xàbia, a small but very dedicated group of people of all ages who spend much of their year thinking about nativity scenes and how they are going to put together the next great creation. In the time before COVID-19 darkened our lives, they sold figures and scenery from stalls at various street markets in the town, not only providing the resources for families to build their own nativity scene, but also raise some much-needed funds to finance their amazing creations.

In normal times, members of the association would be out judging the nativity scenes that can be seen through the windows of private houses, whilst couples and families wrapped up against the night-time cold will walk through the narrow streets of the historic centre to look themselves at these marvellous creations, some of which have been in the host family for many decades.

The caganer is a unique feature in nativity scenes in Catalonia and here in the Comunidad Valenciana. In short, it is a figure hidden deep in the diorama who is … well, defecating. It could be in a dark corner somewhere, behind a tree, up in the hills, or in the corner of a market scene. It could be anywhere. But his presence is essential for it is a popular Christmas game with children (and adults) to try and find the caganer.

In Xàbia, the municipal belén used to be located in the open air in the church square in front of the town hall building, a huge creation some 15m long. However, it was open to the elements and for a couple of years the council tried locating it inside its own temporary structure, once outside the post office and another year in Placeta del Convent. But the glass often steamed up and you couldn’t see the display inside. In recent years, there have been three municipal displays; one in the centre of the indoor market, a second inside Casa de Tena in Carrer Major, and a third in the Casa del Cable in the port.

This year, despite the ongoing health crisis, there is a large nativity scene in the front hall of the Casa de Tena in Carrer Mayor in the historic centre which can be viewed safely with all the necessary health protocols in place.