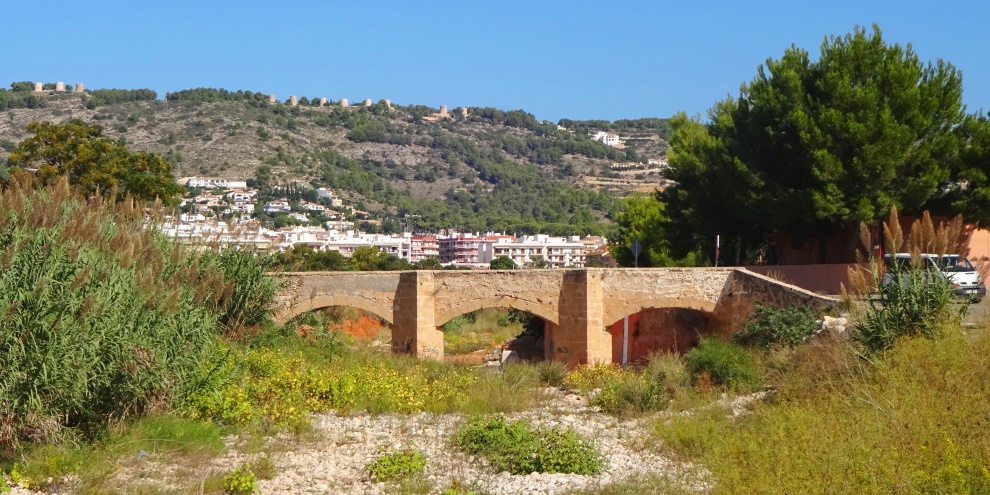 This is a nice flat circular route which mainly follows the course of the river Gorgos from the sea to about three kilometres inland combining both urban and countryside, perfect for an extended morning stroll and perfect for dog-walking. The route is mainly on tarmac but there are one or two sections along rough track so good footwear such as trainers or even walking shoes would be recommended, I certainly wouldn’t do it in flip-flops or sandals. Being a circular walk, the route can be joined at any point but this description starts at the sea on the Puente de Triana at the mouth of the Gorgos and follows it in a clockwise direction. It should take about two hours to complete, allowing for stops along the way.

There is plenty of parking close to the Puente de Triana, either along the seafront on the pebbles or in the port zone itself. The river Gorgos empties into the sea under the bridge but it has only been recently so. Until the late 1960s the river flowed along a route which is now the wide avenue of Jaime I in the centre of the port and emptied into sea at the beach of La Grava. In August 2020, a new bridge was opened, replacing a crossing that had been badly damaged by the floods of 2007 and the storms in 2019.

To the south of the bridge is the wide pedestrian walkway called Passeig Julio Alejandro Casto which has been named after the Spanish screenwriter who died in Javea in 1995. The passageway runs alongside the river for 175m to Calle Génova and the modest Campo de Fútbol Mezquides, an artificial mini football pitch which is popular for local football and rugby clubs and is available for private hire through the Ayuntamiento de Xàbia. Continuing along the river to the right of the football pitch, the road reaches the dual carriageway of Avenida de Augusta and the bridge which was the last to be built across the river before the new Triana bridge was constructed in 2020.

Crossing the wide road, the route passes along the southern side river on a rough path which follows its course as it bends left and then right. To the left is IES Numero 1, one of the town’s two secondary schools which was built on the former ground of Javea Cricket Club. Formed in 1992 it won the Spanish Cup in its first season and was a powerful force on the Costa Blanca. But the town’s expanding population needed a new school and the local authorities decided that the land next to the river was the best place to locate it. Javea CC vacated the plot after being promised land for a new ground. It never materialised and the cricket club was forced to play its games at Albir, some 32 kilometres to the south, before it disappeared altogether.

The track follows the river back to the tarmac of Calle Bolonía which runs alongside the river to the bridge of Avenida del Pla where there is an Aldi supermarket. Our route heads right across the bridge to the famous (some might say ‘infamous’) Moli Blanc disco which offers dancing until dawn during the summer months. We cross the dual carriageway by the pedestrian crossing and make our way back across the bridge; this is the safest way, we advise not trying to cross directly.

Leave the main road and follow Calle Liverpool through the industrial estate. Halfway down on the left used to be the drive-in cinema that was still operating barely a decade ago; it is now the site of a private storage business. Also to the left, you might just spy the low tower of Torre Pelleter, one of Xàbia’s ‘casa-fuertes’ nestling amongst the industrial units that once provided a certain degree of protection from marauding pirates for those who worked on the land when this zone was entirely agricultural.

The road bends around to the left and we join the river again. At the junction there is a green zone with tall trees which are often called the “squawking trees” due to the number of loud parakeets which have made them their home.

Straight ahead is the entrance of Camping Javea, a long-established and very popular camping and caravan site, but our route turns right to continue alongside the river and now we start moving into the countryside. Be careful with the blind bend as vehicles often come at speed around the corner with little care for others or indeed themselves. To the right is the ford of Camí Tapies, a popular crossing which provides a link between the Arenal and the town away from the main roads.

Just around the corner, a high wall to the left hides the Desalination Plant which was built in 2001 and extracts water from very deep wells located close to the coast near the river Gorgos. Through the process of reverse osmosis, salt is seperated from the water and chemical reagents added to balance it and make it suitable for human consumption. The diluted brine is returned to the sea through ejection pipes which feed into the Canal de la Fontana. In recent years, as the severe drought affects the Marina Alta region, the plant has moved to maximum capacity to ensure supply and Xàbia has even been selling the water to other municipalities.

To the right is a fantastic view of the old town and the majestic mountain of Montgó in all their splendour and then we reach the three-arched Pont del Llavador which was built in the 16th and 17th centuries and its landscaped roundabout, rarely used as such by drivers who are more concerned with who can cross first over the narrow bridge.

About 100m south of the bridge are the remains of the Torre Torroner, protected by a tall cement wall, the result of attempts to protect what remains of the crumbling building after almost complete destruction during the floods of 2007.

The route continues to follow the Camí Rui Gorgos alongside the river, taking care of the narrow road which is a popular rat run for all manner of vehicles.

We pass the second ford · Camí de les Sorts · and continue following the river. After more than a decade when the floods of 2007 caused part of the riverbank to collapse, the road has re-opened to all after being totally repaired in 2020, including vehicles so take care.

Continuing along the road we come across the third ford and our way across the river – Camí de les Sortetes. This narrow road was the ancient route between Xàbia and Benitatxell and leads right into the old town. We follow the road towards the town, crossing Camí de les Sorts which leads down to the second ford that we passed earlier and come across Bodega Sortetes which, if open, provides a perfect place for a quick rest and maybe even to sample a glass of one of their wines.

Continue past the bodega, past the bins and take the first right into Calle Malta and follow the narrow road around until it opens up into the wide Carrer del Molí la Safranera with the wide complex of the municipal sports ground to the right with the Trinquet, an enclosed futbol sala pitch as well as the full-sized football ground, the home of CD Jávea.

The route passes by the sports ground and drops down to the right and back into the countryside. At the junction with Camí Freginal, which leads down to the bridge to the right, there is a rough track straight across the road and the route continues along this as its winds through the low undergrowth to eventually emerge in Camí Tapies.

To the left is CEIP Trenc d’Alba, one of the newest primary schools in the town, and the rest of the zone has been laid out in a neat grid ready for development, some of which has finally started. Leaving the track, turn right and then left into Carrer José de Espronceda and follow for its entire length to where it meets the Avenida del Pla and we’re back in familiar territory with the Moli Blanc disco on the other side of the road.

The route crosses the main road by the same pedestrian crossing that we used before but rather than crossing the bridge, we turn left into Carrer Vall de Gallinera and we’re back alongside the Gorgos. This is another zone that has been laid out for development but only a stretch alongside the river has been built on. And we continue alongside the river, along a wide passageway which leads back to Avenida de Augusta.

The route crosses the dual carriageway and turns left to what is known as the ‘fountain roundabout’. We turn right into Avenida dels Furs, passing by the Palau Municipal d’Esports Miguel Buigues Andrés and the Guardia Civil barracks and continues on into the port and the ‘dolphin roundabout’. Turning right into Avenida de Lepanto we continue back to the Puente de Triana and the circle is complete.

“Time is a sort of river of passing events, and strong is its current; no sooner is a thing brought to sight than it is swept by and another takes its place, and this too will be swept away.”