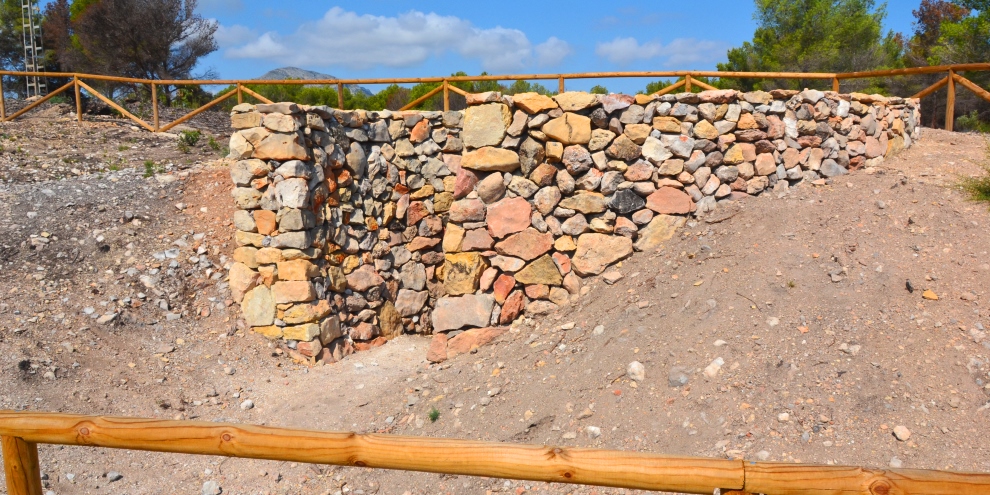 The fire of September 2014 devastated the plateau of La Plana, stripping it of much of the tree cover that provided welcome shade to visitors exploring this wide flat plain. However, two old stone structures were exposed, previously hidden beneath the branches and under bushes, virtually forgotten after barely a generation since they were last used. These are the remains of the lime kilns which were used to extract quicklime which would be then used in the construction of local buildings.

Since they were exposed, the municipality has restored them to a point where they can be used to tell the history of an industry that was developed more than 10,000 years ago by the Phoenicians. Evidence suggests that the first kilns were built in the Xàbia region around the Punta de la Fontana during the Roman occupation, the lime mortar produced being used to coat the water pools hewn out of the sandstone coast which were used in the salting industry. Their use continued through the Islamic era and into the Christian era. The remains found after the fires are mostly likely from the mid-18th century; banking of slopes and agricultural destroyed many of the earlier structures.

The kilns are cylindrical structures which have been partially excavated into the ground in remote areas away from urban centres and close to the resources required. They had strong stone walls and a narrow entrance way. The kilns were covered in soil with a chimney to allow the smoke to escape. More than 50 were in use in Xàbia a little more than half a century ago, located across the municipality from Granadella to La Plana.

Into these kilns, the master ‘calciner’ placed the limestone hewn from the land and wood cut from the surrounding trees. The wood would be lit and the furnace kept burning for three days. As the temperature rose to some 1,000 degrees, some 15,000kg of fuel would be needed to convert the stone into 12,000kg of calcium oxide, ‘quicklime’, so the master ‘calciner’ needed to be on site day and night constantly feeding the kiln as smoke drifted across the sky.

The kiln was allowed to cool before the quicklime was extracted and sold to the building trade to be mixed with earth, sand and water to create a lime mortar which was used to construct buildings in Xàbia right up until the 1960s. The mortar gains strength over the years, thanks to the mineralisation process, which gives the buildings their resistance.