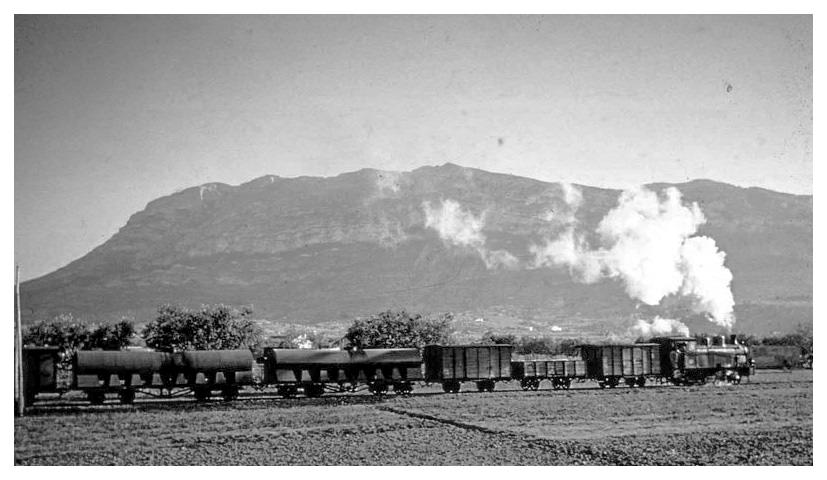 Despite being just seven kilometres away as the crow flies, those without their own transport will know how difficult it is to get to Dénia from Xàbia. Or indeed anywhere. This sense of isolation has been felt by those who live in our town for a long time, and particularly when the railway from Alicante to Dénia was completed in the summer of 1915. The route bypassed our town, despite its strategic position along the coast with a busy port that had been exporting the region’s products for many years and a wide bay that had been popular refuge during navigation along the eastern Mediterranean.

Yet a solution to the town’s isolation had been presented to the authorities in the late 19th century, a proposal to link Xàbia to Dénia by steam-powered tram via Gata de Gorgos and Ondara to re-activate the region. It came at a time when the local economy was suffering after the lucrative raisin trade had declined dramatically, thanks to foreign competition and disease. Xàbia had been a pioneer of this industry in the mid-19th century and many iconic grand mansions and palaces still stand to this day as testament to golden era for the town. However, as the century ended, the town was in serious trouble. The wealthy landowners were struggling to find a way to adapt to their change of fortunes whilst unskilled labour was becoming increasingly difficult to find as people journeyed elsewhere in the search for work.

With a region on the verge of economic and social collapse, a report was published in 1904 which sought to promote and develop the wealth of the Marina Alta by reactivating a proposal to build a railway loop that linked Xàbia to Dénia, a project that had been abandoned just a few years earlier due to lack of investment and administrative red tape. By now, the port of Dénia was being developed after the town had been linked to Carcaixent via Gandía, providing a connection to the city of Valencia. But the proposal never progressed further than a report.

By 1910, a railway was already being driven northwards from the city of Alicante and had reached Villajoyosa with preparations in the advanced stage to extend the route to Dénia. However, as an engineer’s report of that same year observed, the planned route totally ignored the towns of Benitatxell and Xàbia and thus abandoned the economic interests of the region.

The report continued to highlight the fact that Xàbia in particular was considered a strategic military position along the eastern coast of Spain, with many military experts agreeing that the bay of Xàbia was most favourable for a landing by foreign invaders and thus warranted protection, something considered necessary during Spain’s short and disastrous war with the United States of America in 1898. In addition, the town was linked to the Balearic Islands by two underwater cables which provided communication between the archipelago and the mainland.

It concluded that the construction of the railway direct from Villajoyosa to Dénia not only ignored the strategic value of Xàbia but also abandoned the town, one which had become one of the busiest ports in the region, both for commercial movement of the region’s products to the rest of Spain and abroad as well as the booming fishing industry which was catching a huge amount of fish “that would be enough fill all the squares in the province alone … if it had a railway“. In addition, thousands of tons of “extraordinarily economical” ‘tosca’ stone extracted from the coastal quarries and used for the construction of buildings and for irrigation channels could be transported easily to the region’s towns … “if it had a railway“.

In 1912, a further report was commissioned by the government to explore the idea of linking Gata de Gorgos to Xàbia and engineers reported that a railway line could indeed be laid across the valley to terminate at the port zone. In April 1914, a project for a 10,816 metre long railway link to Xàbia port, with an intermediate station in the town, was approved with a budget of just over 2 million pesestas, worth some 8.3 million euros today.

Two days after the project went out to tender, the Archduke Franz Ferdinand of Austria, the heir to the Austro-Hungarian throne, was assassinated in Saravejo, triggering a serious international diplomatic crisis that would lead to two great European powers lining up against each other in a devastating war that would engulf much of the continent.

At the time, Spain was in the midst of an economic and political crisis of its own, isolated internationally since the disastrous 16-week war against the United States in 1898 which left it with a decimated and aging army and forced to face problems of its own against the Riff Berbers in North Africa as well as Gibraltar. At the outbreak of the First World War, Spain widely opted for neutrality.

As a consequence, reduced investments in heavy industry delayed work on the stretch of railway between Villajoyosa and Dénia – it would eventually open in July 1915 – whilst plans for a branch line to Xàbia were abandoned and soon forgotten.

A century later, and the town still feels isolated, especially for those who don’t have their own transport. Even travelling to the region’s only hospital can prove to be a difficult and expensive chore for those without a car. There is a bus service – of sorts – which runs a very limited service between the two towns but only on weekdays. ALSA’s regional and national services don’t allow short hops on their routes (unless you come across a sympathetic driver but they are rare). But it’s not a new problem. Once upon a time, there was a real effort to link Xàbia to the rail network. And then came an angry young Serbian called Gavrilo Princep who fired a shot that was heard around the world.