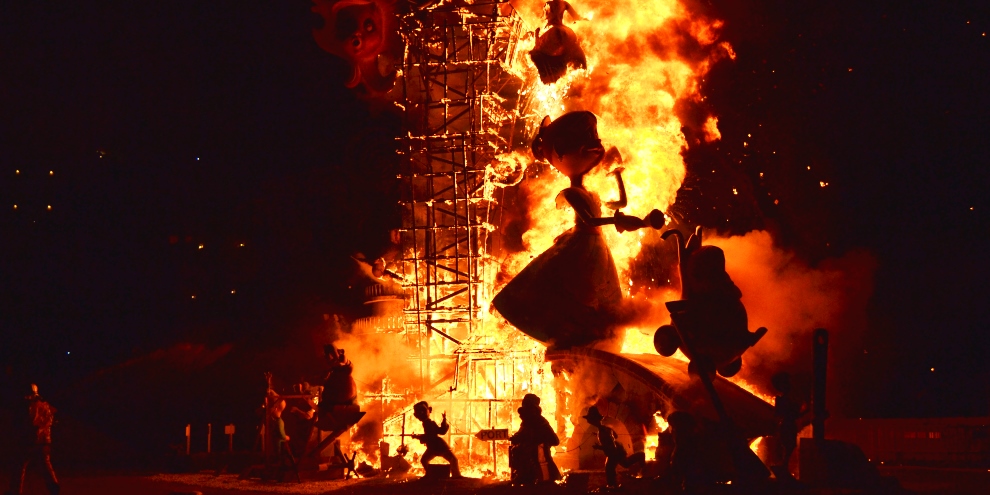 The following morning after the fantastic Nit dels Focs it’s probably going to be difficult to rouse much interest in the events of the final day of the fiesta but another loud ‘despertà’ through the streets of the town does its best to encourage people to leave their beds.

After a special mass, there is the ‘mascletà’ on Plaza de la Constitución, a firework display based on a fascination with noise. There are no colours or pretty patterns, just several minutes of loud explosions that rock the town. It almost unique to the region and has become a recognised art form, an explosive symphony of some 240 kilograms of gunpowder that builds according to a set pattern of ground and air explosions. The crescendo is a cacophony of ground-shaking booms and ear-splitting air-bursts that can be heard for miles around. It plays a perfect part of the final day of festivities.

As the evening approaches, there is the final parade of the festivities; the procession of the floats. This is a fairly formal cavalcade of the schools, associations, groups and, to finish things off, the fiesta queens, both current and those of the quintàs celebrating their 5th, 10th, 15th, 20th and 25th anniversaries. There’s music from the ‘charanga’ brass bands and sweets fly in all directions as excited children watch the parade armed with plastic bags to collect them; it’s a dentist’s nightmare. And the confetti. There’s no point trying to avoid it! You’ll wake for days afterwards finding small bits of coloured paper everywhere. We think the best place to watch is from the elevated road close to the Cruz Roja in Avenida de Alicante.

After the parade, the ‘festeros‘ parade quite informally to the Placeta del Convent where the ‘Foguera Infantil’ has been installed for the past few days. The detail of these designs is always quite stunning and it is often a shame that they will be consumed by fire. All is not lost, however, and it is often tradition that a small part of the ‘foguera’ will be saved from the flames by a special vote of the Fogueres Commission. There is a great deal of gentle jostling for position to see the ‘infantil’ court of honour.

Space is at a premium in the bars and restaurants around the old town as the growing crowd grabs a drink and perhaps something to eat before making its way to the Plaza de la Constitución for the final couple of acts of the celebrations.

As the square begins to fill with an excited crowd, there is often live music on the big stage whilst most admire the ‘Foguera Central’ which is lit up to one side.

Amongst the trees of the Parque Montaner to the north of the square, pyrotechnic engineers are putting the final touches to a spectacular firework display set to a musical theme. By midnight, the square is full to bursting, shrill whistles demanding the start of the explosive light show. A single rocket often gives a short warning that the display is about to begin; the street lights going out means that it is imminent. The theme varies from year to year; in the past the explosions have been choreographed to a medley of movie themes or to heavy rock music. Almost every year a tree catches light and the firemen standing nearby rush into action, dousing the flames the best that they can. As the music reaches the crescendo, the explosions become more thunderous, lighting up the night sky in bright colours, the slopes of the mountain of Montgó in the distance often reflecting the illuminations. As the display draws to an end, the booming noise reflects off the surrounding buildings; quite often the barrage becomes so extreme that the crowd begins to inch away from it, fingers in ears to protect from the deafening roar. An intense burst of light usually concludes the show and the huge crowd breaks into applause, appreciative of another great display.

As light debris continues to drift out of the night sky, attentions switches to the ‘Foguera Central’ fenced off at one end of the square.  The crowd sweeps into the void that had been previously cordoned off for the firework display, many making for the steps on the northern side of the square which afford the best view of proceedings. At the base of the ‘foguera’, shadowy figures have already begun to pour liberal amounts of flammable liquid over the statue; a long string of firecrackers known as a traca lead away from it to the designated ignition point, either just inside the safety fencing or on one of the balconies of the nearby apartments.

After the thrill of the musical fireworks, the crowd becomes quite restless once again, some whistling impatiently for the start of the burning that brings the fiesta to a conclusion. At the front of the crowd is the quintà, changed out of formal dress and wearing their much cooler colours, and as the time of ignition approaches they become almost hysterical with excitement. But first there has to be the speeches from the Fogueres queen, almost indistinguishable against the noise of the crowd, before the string of firecrackers bursts into life, the small explosion running along the line swiftly towards the ‘foguera’. Take a last look at the design for within minutes it will be consumed by fire!

A loud explosion and flames begin to rise through the statue, thick black smoke rising into the night sky. The rising intense heat momentarily pushes the crowd back a few metres; firemen using their hoses to keep the inferno under control occasionally turn them on the spectators closest to the fire, the cool water a blessing against the high temperatures building in the square.

As the flames consume the ‘foguera’, the song of the same name, a tune that has been heard throughout the festivities and is now being heard for the last time, encourages the quintà to plead with the safety stewards to be allowed inside the exclusion zone. They have to be patient; any part of the statue that is likely to be a danger has to be allowed to burn through or knocked to a safer position by the fire crews. However, once everything is deemed to be (reasonably) safe, they are allowed forward and they begin to join hands to encircle the blaze. They start walking around the fire, still holding hands, singing and chanting before breaking into a run, jumping over as best they can the powerful jets of water from the fire hoses.

They are determined to enjoy the experience; it’s their final act as quintà of the year’s festivities. And just in case some of them don’t realise that their reign is coming to an end, there is often much commotion just outside the fencing and kept just about in check by the police is the following year’s quintà, ready to step into their shoes. It’s fairly good-natured although, in the recent past, the taunting often fed by over-exuberance on the booze occasionally led to a bit of pushing and shoving between the two groups.

As the quintà continues to enjoy its final moments as the “headline act” of the Fogueres, the big stage comes alive once again with live music and there are still just a couple of hours more to enjoy the festivities before the ‘Fogueres de Sant Joan de Xàbia’ come to an end for another year.