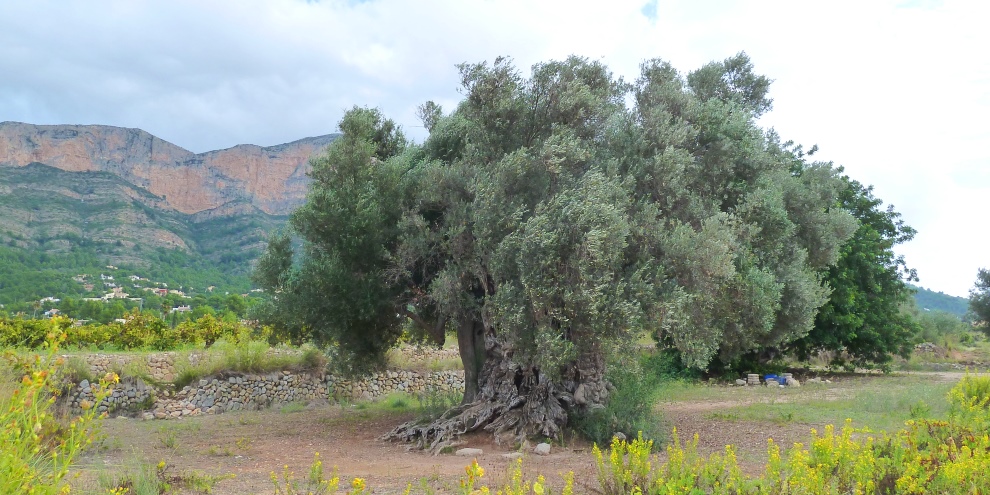 With the steep cliffs of Montgó dominating to the north, this delightful walk passes through the fields of the valley in the relative peace and quiet offered by the countryside. The route visits the ancient olive tree which is between 800 and 1000 years old, planted by the Arabs who used to dwell in the valley, and still bears three types of olive. It also passes by the 14th century chapel of Popúl which fell into disrepair during the Spanish Civil War and was renovated in the early 70s thanks to the efforts of British ex-pats who began to settle in the area. In between there is a very pleasant stroll through the ‘campo’, a route of about five kilometres with very little ascent and descent and on varying surfaces from narrow tracks to wide country roads.

There is plenty of parking alongside the little Ermita del Popúl. The white-washed chapel which nestles beneath the towering southern flank of the mountain of Montgó dates from the 14th century but was another victim of the recklessness of the Spanish Civil War during the 1930s. It was renovated in the early 70s thanks to the efforts of British ex-pats who began to settle in the area and is still used by the Costa Blanca Anglican Chaplaincy for Church of England Sunday services as well as by the Catholic Church in September when the Virgen del Popúl, whose feast day in on September 12th, is honoured with a special pilgrimage from the old town for mass.

Our route heads away from the chapel on the busy Carretera de Jesús Pobre, heading westwards with the huge hulk of the mountain on our right. We pass La Ermita Supermercado, an oasis of necessity for those who live on the remote urbanisations which sprawl across the lower slopes of Montgó and then drop gently towards a bridge over the deep Barranc dels Garroferets and immediately after the crossing, we turn left into Carrer L’Assagador de Les Valls and begin to walk away from the busy main road.

After barely 100 metres, the tarmac continues to the right into Calle India whilst a rough track continues alongside the gulley; we turn right, passing through small vineyards and a few secluded villas. After 200 metres of so, the tarmac ends and a beautiful vista opens up before us as we continue along a wide track. Ahead of us we can see the rooftops of Jesús Pobre and the three prominent towers of the disused windmills. Further inland tower the huge mountains of the hinterland including the twin peaks of the Caballo Verde and the serrated ridge of the Sierra de Bernia.

The track bends left and continues to the entrance to a private dwelling. Ahead are two distinct paths; we take the lower path to continue and after some 150 metres, we reach the junction with the busy rough track of Camí Vell de Pedreguer, no doubt the remnant of the original route from Jávea to Pedreguer. The traffic noise will have almost ceased with just the occasional whine of a lorry to interrupt the delightful sounds of nature. We turn right and follow the track across a low ditch to the Olivera Milenaria.

We leave the path and pass around a large carob tree to find the old monument standing all alone. This ancient olive tree of some 7 metres in height is considered to be somewhere between 800 and 1,000 years old and it still bears three types of olive. Some sources even claim that it was planted in 1023 by Muslims who used to dwell in the valley. Whatever its age, it is a solitary representative of an era when the Moors dominated the area. Walking around the tree, the spectacular large and twisted hollow trunk is testament to its old age; it is unfortunate that some less appreciative passers-by have chosen to etch their names into the surface but this robust and hardy tree survives and is still regularly pruned for its fruit.

HIDDEN XÀBIA: If Only Trees Could Talk

After spending some time admiring this ancient tree of the valley, we return to the path and continue in the same direction on what is now a wide rough track. After barely 100 metres, there is a lone carob tree at a crossroads of paths and our route turns left, following a well-trodden path which drops gently through well-tended olive groves and then becomes quite secluded with trees on either side until it apparently disappears into a dark hole.

This is our first crossing of the Barranc de la Hiedra; it may get a little wet and muddy as we pass through the dark tunnel of reeds, especially in the winter months. Take a look at either side where someone has created a natural fence to keep the way open.

The path climbs away from the little gulley; take a look behind to see a great image of this natural tunnel with the mountain of Montgó behind. The wide path bends right and then left and it passes through the vines before reaching a T-junction with Assagador de Cabanes, an old drovers road that ran between Jávea and Pedreguer (it is officially called “Camí de Jesús Pobre y Pedreguer a Xàbia” but the old name is much more romantic). Our route turns left and we continue along the rough track for a kilometre or so, passing by olive groves and small estates with their barking guardians.

At the next junction, we turn left again into Camí Assagador de les Valls; there is a low post with red and white stripes on the left side of the track. Heading north, we can admire the steep cliffs of Montgó; as we get closer, see if you can spot the “bell” that appears to have been carved into the cliff-face. We cross back over the Barranc de la Hiedra, less obvious than before, and make our way along the rocky track past a clump of trees that appears a little out of place amongst the olive groves and vineyards.

The path bends abruptly to the right and there is another low marker post to assure us that we are on the right path. We climb gently back out of the low valley for some 400m until we come to a crossroads. We turn right onto a narrow path that runs through the high grass and then becomes a wider rough track; we are back on the Camí Vell de Pedreguer and just before we return to tarmac, there is a fairly new sign that tells us that we have just traversed a very short section of the Xàbia – Camino de Santiago branch which eventually joins up with the famous pilgrims route to Santiago de Compostela and the remains of Saint James.

Back on the tarmac, we pass by homes to a crossroads and turn left into Camí de les Valls which climbs slowly back up to the busy Carretera de Jesús Pobre and the little Ermita del Popúl.

“If the olive trees knew the hands that planted them, their oil would become tears.”