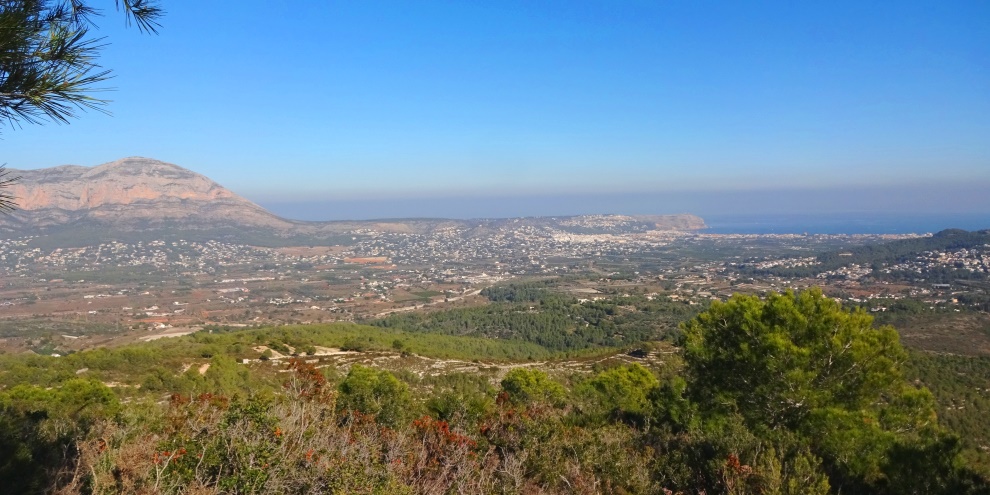 Tossal Gros is a 335m high mound which forms the southern boundary of the wide valley of Xàbia. Its tree-lined summit is clearly visible and seems tantalisingly close but involves a determined walk and steep climb up one of its northern ridges. But the reward for the effort is a very pleasant hike through stunning landscape and a wonderful 360° views across the region.

The walk is an extended circular route working in an anti-clockwise direction. It starts in Placeta del Convent where one can enjoy a pre-walk coffee in one of the many bars in this charming square. Walking downhill, cross over the main road and at Bar Les Notes turn right into Carrer de la Font and walk down towards the square with the ironwork businesses. Next to Proferro we join Camí de les Sortetes through the rough square and under the main road to enter into the more rural side of Xàbia.

Continue carefully across the junction and cross the river via the ford. Turn right and follow the road alongside the dry river bed to the bridge carrying Carretera del Benitatxell across it and carefully cross the road to continue alongside the river. Ahead of us, the mound of Tossal Gros sits. After about 500m drop down onto the river bed and follow the obvious path to join the concrete road on other side.

Follow the road to the junction with Camino Cabanes and head straight across to take a track through the undergrowth; there is a steep climb at the end to reach the road. With the concrete facility ahead turn left and follow Camino Cabanes which is somewhat rough underfoot at first but becomes more solid as a surface.

Follow the road for some 800m then take the first obvious left Camí del Benimell and follow as it drops back down to the river. On the opposite side of the river there is an obvious track which rises up to a collection of white building; make your way across the dry river bed and ascend this track. (Note: one could walk straight along the river bed from Camí Cabanes to this point but the walk on loose stones and pebbles can be quite energy-sapping at times and we wouldn’t recommend it as there’s a long walk and climb ahead.)

The track becomes tarmac and when it bends in a hairpin to the left, there is a chance to admire the view and take a water stop. It feels strange that due to ancient boundary issues which have been under dispute for more than a decade, you are now entering Dénia territory. Continue to follow the road uphill as it bears around to the right and passes through the collection of white buildings.

The 18th century chapel on the left is the Ermita de Benitzaina which is dedicated to San Antonio Abad. In 1994 it was assigned to Xàbia by the Generalitat Valencia with its western and northern walls setting the border with Dénia as outlined in a demarcation certificate issued in 1899. But in 2010 Dénia insisted that the chapel lay within its territory when it issued its new General Plan (PGOU). The fortified house opposite remains in the hands of the Dianense. It’s complicated issue. Both have been designated as BIC (Bien de Interés Cultural) and are protected buildings.

The road continues uphill and then bends to the right around a farmstead. There are fantastic views to the north with the whole length of the Montgó massif now exposed in all its glory. Continue along the road for about 500m and then turn left onto a track next to an enclosure with horses and donkeys; it feels like it should be a private road but it is open to public access to the hills behind. Follow the track around the house and then turn left to follow a narrow well-defined track alongside open fields. After about 200m the track turns abruptly to the right and begins the steep climb to the summit of Tossal Gros.

The path passes through the trees, an obvious route which becomes quite rocky and there are high steps to negotiate at times. Whilst climbing be very aware that this is a popular descent – at speed – for mountain bike enthusiasts and we came across a couple of riders during our ascent. The views which open around you are quite something but soon all concentration turns to the ascent as the path becomes steep; we found that regular stops for a breather allowed us the opportunity to enjoy the landscape opening up around us.

After about 800m of steep relentless climbing the path levels out for a moment and the most truly stunning view opens up to the south across the deep gorge through which the N-332 passes between Gata de Gorgos and Teulada. Across the chasm, the steep eastern end of the Cim de Serrellars (401m) dominates and through the southern entrance to the gorge, in the distance, once can make out the Serra de Toix and, to the right, the eastern end of the Sierra de Bernía.

Continue to follow the path along the ridge, the tree-lined summit of Tossal Gros with its mast is so close now. When the path joins a wide rough track, turn right and climb solidly for 175m to a pass. Here, to the left, there is a rough path which climbs around the edge of the summit; the views are even more stunning now. Soon you reach the wooden hut and mast; follow the road around to the right and continue to the summit marked by a tall white concrete post. The trees mean that the 360° view isn’t entirely unbroken but a few steps left and right means you can make out many landmarks in the region.

For the return, head back down to the track and turn left to continue following it as it descends, steeply at times, to what some have dubbed the “cattle plateau” due to the fact that a cattle ranch used to operate here. Take extra care on the track as it can be quite loose at times and unexpected slips can happen. At the junction at the bottom of the track, turn left and follow the forestry track as it descends to the road. (Note: there is an option to turn right and follow the road down into Urbanisation Les Fonts and stop for a refreshing drink at the bar but this adds another three or four kilometres onto the route and in our experience the effort simply isn’t worth it.)

At the end of the track turn left onto Camí Vell de Teulada and follow the road through the urbanisations to the bottom; be aware that this can be quite busy with traffic and proper road walking protocols should be followed. At the bottom with the junction with Carretera del Benitatxell there is a stone cross in the middle of the road known as Creu Vermella, one of the oldest documented stones crosses in Xàbia mentioned in a 17th century document and still in its original position.

At the end of the road, turn right into Camí Pla d’En Roca and continue back to the river. Turn right and cross the river by the ford and head back up into Xàbia.

“The best view comes after the hardest climb.”