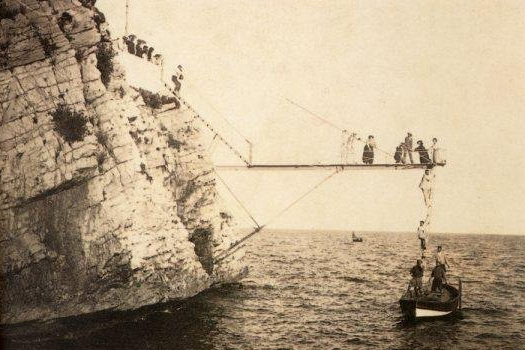 We often wonder how places get their names, especially here in Xàbia. Cala Blanca is obvious, for it is the point where the limestone coast changes abruptly to marlstone and clay, the cliffs glowing white in the sunshine, whilst Platgeta del Pope reminds us of the time when an Orthodox Christian priest took to bathing in the sea from a beach that now takes his name.

That beach is located in what is known as Cala Tangó. For many UK readers, the name tango might conjure up an orange fizzy drink which had its heyday during the 1990s; for others it might mean the evocative South American dance. But the origin of the name of this small bay is something that has been largely lost in the midst of time.

There is a small promontory known as “Morro de la Creueta”, some 300m along the coast towards the end of the headland. A small quay had been built from the remains of the town walls which were demolished during the 1870s in the small cove known as El Racó but it couldn’t stop boats and barges being dragged against the rocks when the “frightful winds” blew from the south-east. Hence the name: “Bluff of the Cross”.

In 1898, the Morro de la Creueta was chosen as the most appropriate place for the installation of a “tangó”, a horizontal iron pole similar to the bowsprit of a boat, which extended from the rocks some six metres above the sea. The idea was that the mast of a boat in distress could be clamped to it and the occupants climb up the mast and make their way along the pole and up a fixed iron ladder to the relative safety of the rocks.

On the end of the bluff, a small platform was built on which a small hut was constructed, the remains of which can still be seen today. The hut could also be accessed from the sea but this could only be used during calm seas. The total cost of the infrastructure was just over 1,540 pesetas.

The facility was officially opened on February 2nd 1899 during which a series of rescue manoeuvres and drills were carried out, both climbing from the boats by the use of a vertical ladder connected to the pole and cork life jackets thrown into the sea from the end of the pole. As the dignitaries returned to the port, a band provided some festive music to mark the occasion.

However, by the 1920s, the collapse of the raisin industry and the subsequent decline in the use of ships to export them made the infrastructure on Morro de la Creueta obsolete, especially when plans were proposed for a new, enlarged harbour area were tabled a few years later.

The location can be accessed by way of a narrow track from the port. Following the PR-CV 355 Port Xàbia-Montgó, after about 75m, there is a variant marked for “Cala Tangó” which contours its way for some 400m to the small cove. Be aware that the cliffs are quite unstable above the small beach and care should be taken at all times. One can climb up to the remains of the hut and look across the bay as well as back towards the port area.