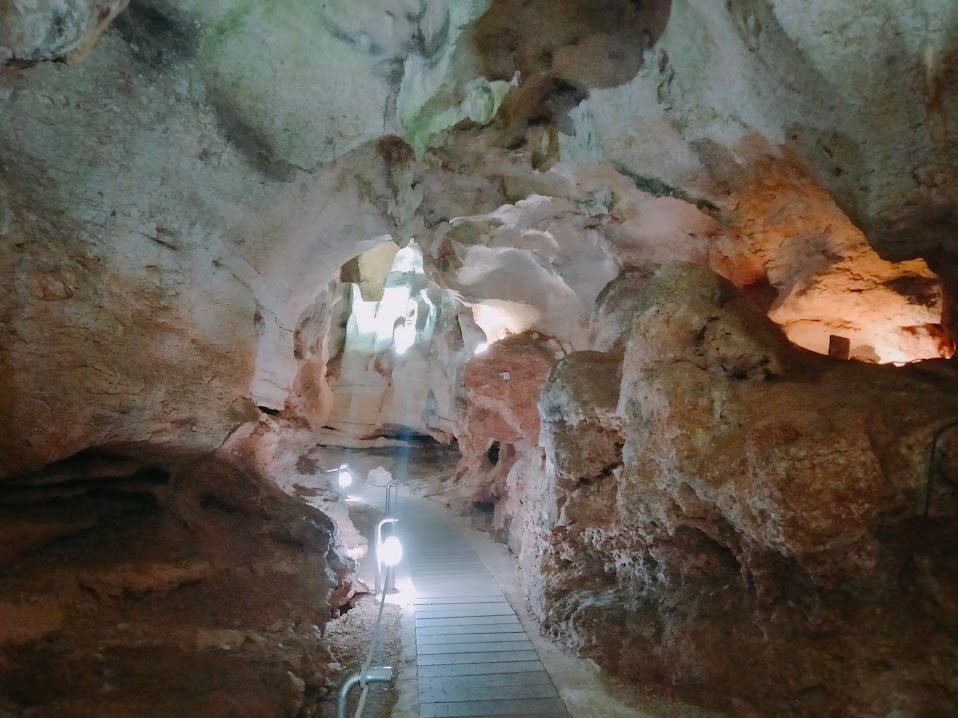 La Cueva de las Calaveras is a cavity which extends some 900m into the side of the hill just outside the village of Benidoleig. Its name – the Cave of Skulls – comes from the fact that the remains of twelve people were found deep inside during an expedition in the late 17th century.

The first 400m of the cave can be visited by the public all year round. Once you have passed through the cave opening, you can follow a twisting route and see stalactites, stalagmites, beautiful domes over 20m high as well as evidence of ancient cave dwellers.

It’s a great outing for all the family just a short drive from Xàbia.

The cave is about 20 minutes’ drive from the roundabout at the entrance to Xàbia. There are several options to get to the site but the easiest and quickest is via Pedreguer. As you leave the town towards Alcalalí and Parcent on the CV-720, turn right onto the CV-733 towards Benidoleig; there is a sign confirming the way to the cave. After about five kilometres of twisting through the orange groves and vineyards, you will arrive at the cave. There is limited free parking right outside and an overflow car-park on the opposite side of the road.

You will need to buy tickets before entering the cave and these can be purchased from the counter inside the souvenir shop or online here.

You can also buy a guidebook (available in Spanish, Valencian, English, German, French, Dutch and Portuguese) to learn more about the cave as you explore inside, although there are information boards along the route.

Pets are not allowed, except for small animals that can be carried.

The cave is thought to have been lived in by humans more than 50,000 years ago. The ceiling above the main entrance is believed to have been blackened by the soot of fires that were lit by these early inhabitants to warn off wild animals. This main entrance was blocked by a landslide for hundreds of years and an alternative entrance (and once thought to be the only entrance) is located up some steps to the right.

Inside the cave, the route has been carefully levelled by concrete and wooden walkways so it’s accessible for much of the way. Along the way, you can see if you can find several shapes which have been identified in the rock walls: a map of Spain, a pirate, a wild boar, a crocodile, a polar bear, Don Quixote, and Sophia Loren’s bust.

There are also fossils of fish, mussels and oysters embedded into the rock which apparently back up the theory that this whole area including the Montgó massif was underwater many millions of years ago.

At the end of the 400 metres that is open to the public, there is an iron grill which prevents further progress. Beyond this, there is water, an underground river that feeds several small lakes and provides fresh water for Benidoleig.

The Legend of the Moorish King

There once lived a Moorish king called Ahli Moho, also known as ‘Petracos’, who lived in Castell de Castells. In the face of Christian expansion into his territory, the king sent a scout to find a suitable hiding place nearby and that scout found a cave just outside Benidoleig. At the time, the main entrance was covered by vegetation and couldn’t be seen from the outside. So the king and his 150 strong harem disappeared into the cave and were never seen again. Many years later, when the cave was re-discovered, the explorers found 150 skulls arranged in a circle. However, the king’s treasure and the fabulous jewellery worn by his harem has never been found. The legend also claims that deeper inside the cave, parts of a boat and two more skulls were found, some claiming that they belonged to the king and his faithful servant, who were hoping to escape with the treasure. But nothing has ever been found. Yet.

There is a cafetería which has an open terrace with a play area for children. There is also a picnic zone for those who want to bring their own snacks. A souvenir shop offers all sort of trinkets, including minerals and rocks which have supposedly been extracted from the cave.