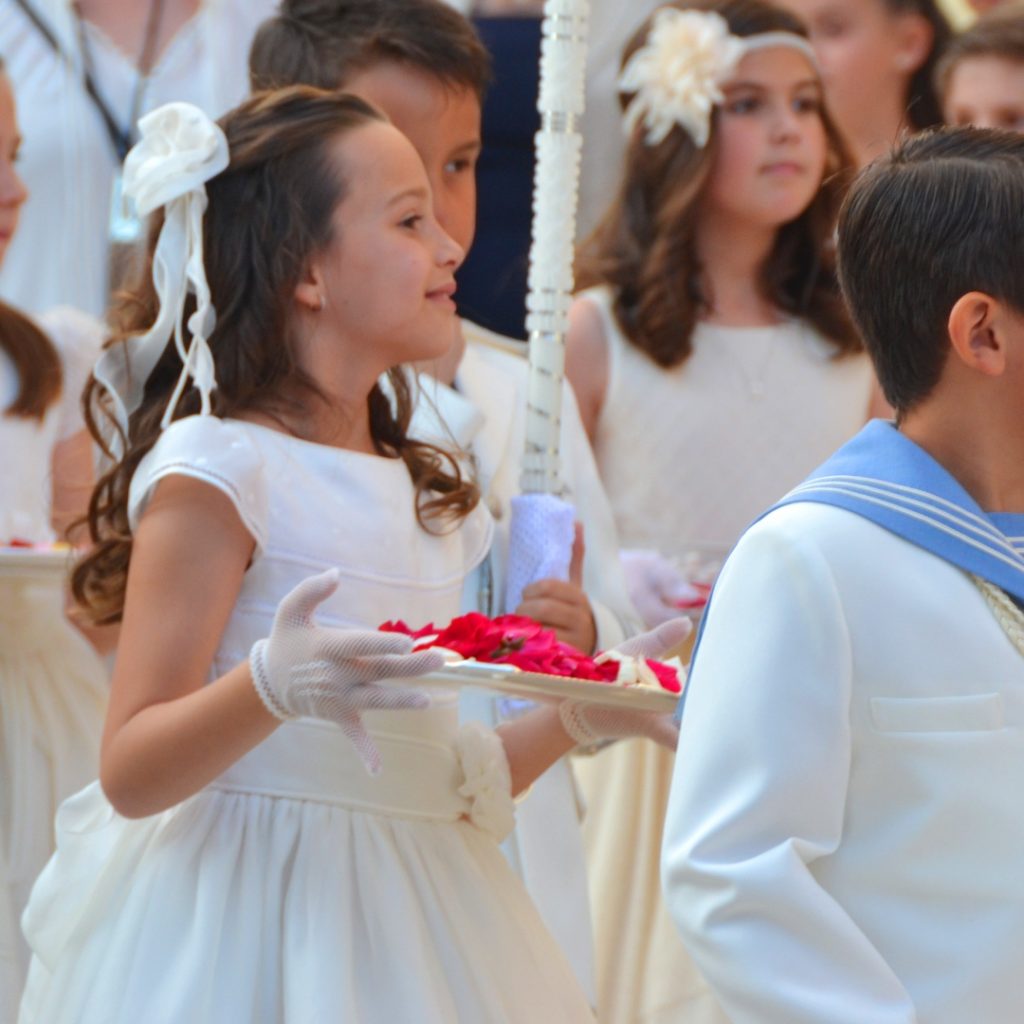 May and June are traditionally the months for children to take their ‘Primera Comunión’ in Spain. The First Communion is a ceremony which is very common in the Catholic Church during which a young person, typically aged between seven and thirteen, first receives the Eucharist, given the sacred wafer and wine for the first time. It’s often seen as a rite of passage so the celebrations usually include large family gatherings and parties whilst the young person often wears their best clothing, sometimes white to symbolise purity. It is a big deal in Spain and a perfect excuse to throw a party.

The event is the culmination of some months of preparation, both spiritually through the attendance of Catechism classes to learn the doctrines of the Catholic Church, as well as through the organisation of the clothes and the post-ceremony party.

Being an important cultural milestone for the family, the money spent on the First Communion can be enormous and, even though Spain still struggles economically, it is estimated that some 600 million euros is spent on these celebrations across the country. The post-ceremony party can cost anything between 3,000 and 10,000 euros and it’s no wonder that it’s become normal to contribute financially through a gift of money to the child. The Communion outfits can cost up to 500 euros – maybe even more – for the dresses for the girls whilst a traditional military or sailor suit for the boys can be a lot cheaper. Add on the other expenses such as the special cake, a photographer, live music and entertainment for the kids and it’s no wonder some families are pushed into debt. But it’s a special day for the family, a major social occasion, and that’s the most important thing.

It is quite common that only family and close friends will be expected to attend the communion ceremony at the church which happens in the late morning. It’s more common that guests will be invited to the celebrations after the main event and, depending on the type of event, those guests will be expected to dress up, quite often as much as one would dress up for a wedding. The more common event is a lunch at a restaurant – be aware that during these tough days you might be asked to pay for your meal – when you’ll be expected to wear something you would slip on to go to a nice restaurant.

It has been tradition to bring along a gift for the youngsters but more recently guests have been known to give money and an amount somewhere between 80 euros and 100 euros between a couple wouldn’t be unusual to offer. If in doubt, ask other guests what they will be doing; sometimes friends join together to buy an expensive gift such as the latest mobile phone or gadget.

Although a lunch and a few post-meal drinks is the norm, the celebrations can sometimes last well into the evening, often with music and more food. Before the guests leave it is traditional for the young people to hand out little gifts as a memento of their special day.