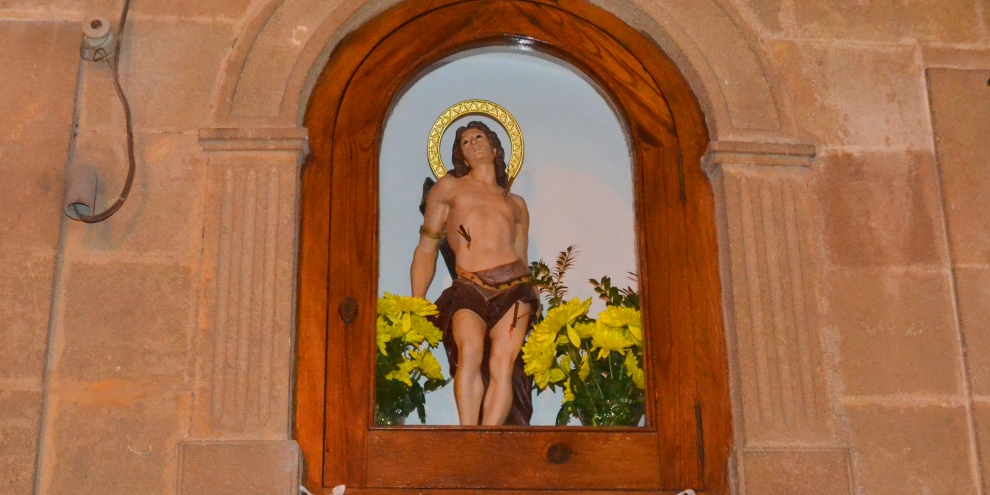 For many years the fiesta of San Sebastián had passed by barely noticeable by much of the population of Jávea and it is only the re-introduction of the controversial running of the bulls around the very heart of the historic centre in 2012 that has hauled it back into the conciousness of many people.

Yet the fiesta should be one of the most important in the town’s calendar for it is San Sebastián who is the patron saint of Jávea, the protector of its people, rather than the likes of San Juan in June, San Jaime in July or even the image of Jesús Nazareno in the spring.

It is unclear when he became the patron saint of the town but it is almost certainly since medieval times when the population was facing the horror of the ‘Black Death’ that was devastating the population of Europe. It is said that the random nature of infection was akin to being shot by an army of nature’s archers and thus they sought salvation from a saint associated with archers. They prayed to San Sebastián for special protection and it was through their devotion (or maybe it was just coincidence) that the village was saved from illness.

Since he was shot with arrows, his image is often depicted with arrows piercing his chest. There are two shrines remaining in town located close to where the old gatehouses used to be, protecting the village from disease, one in Calle San Sebastian behind the Correos and a second close to the bottom of Calle Major.

San Sebastián was almost forgotten when the image of Jesús Nazareno arrived in the mid-18th Century and apparently protected the village from an outbreak of cholera and became the new focus for devotion. However the memory of San Sebastián was maintained by the devoted few and until very recently, his day was celebrated on January 20th with a simple parade to honour his image and a special mass.

In 2012, on the occasion of Jávea 400th anniversary of being awarded the title of ‘Villa Real’ by Felipe III, Jávea revived the celebrations of its patron saint with, amongst other events, the running of the bulls in the centre of town. The event proved so popular that it has remained.

The bull events divide opinion like no other. It is truly the marmite of fiesta acts. In Jávea, there are four such events – bull-running not bull-fighting – and San Sebastiàn is the first one of the year.

There are three days in which both bulls and heffers are released inside an extended arena created from the metal cages sealing of the lower half of the church square and the Plaça del Baix down the steps from this square. Many of the bars around the area are open for business and frequented not just by those who enjoy the bull-running but also those who are not really that interested but do enjoy the social occasion which brings the town together.

There is also something for the children with the carretones – bull heads on carts – which chase the youngsters around the same arena. In addition, there is story-telling and other activities for the youngsters.

WHO WAS SAN SEBASTIÁN?
San Sebastián was a Christian saint and martyr who was executed by Roman emperor Diocletian during the persecution of Christians in the 3rd Century CE. According to legend, he was born in Narbonne, Gaul in c.256 CE to a wealthy Roman family and was brought up and educated in Mediolanum, ancient Milan. In c.283 CE, despite his growing devotion to the Christian faith, he took a commission in the army of Imperial Rome, a position from which he believed he might be able to covertly encourage conversion to Christianity.

According to tradition, Sebastián convinced imprisoned deacons Marcus and Marcellian not to abandon their faith and went about converting a number of others, including the son of the local prefect. It is said that his enthusiasm for conversion resulted in the wife of Nicrostratus, another local official, regaining her speech after six years as a deaf mute as soon as she made known her desire to convert and 78 people were instantly convinced to adopt the Christian faith.

Sebastián was appointed as a captain of the Praetorian Guard under Diocletian and Maximim, who were both initially unaware that he was a Christian. Diocletian, who embarked on one of the most severe persecutions of Christians in the Roman era, soon accused Sebastián of betrayal and he commanded that he be led to a field and tied to a stake before being shot in the chest by arrows from Mauritanian archers and left to die. However, when Irene of Rome, the widow of Saint Castulus, went to retrieve the body, she discovered that the arrows hadn’t killed him so she took him back to her house in Rome and nursed him back to health. Once recovered, Sebastián stood on a step and castigated Diocletian as he passed by on his litter; the emperor responded by having him beaten to death with clubs and his battered body thrown into the sewer.

San Sebastián was martyred in c.288 CE. He became the patron saint for archers, athletes (because of his physical endurance) and soldiers (because of his determination to defend Christian confessors) whilst he is also appealed to for protection against plagues. And it is here that the link is made with Jávea.