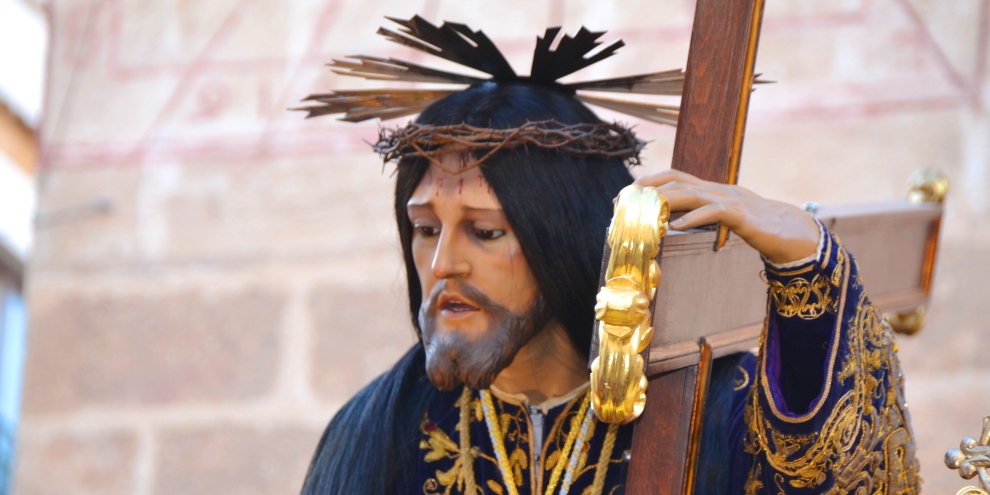 The fiestas that honour the town’s treasured image of the Jesús Nazareno are the most religious celebrations of the year in Xàbia. For more than 250 years the image has played a central part in the spiritual side of life in the town.

On 15th October 1767 the town was presented with a new image of Jesús Nazareno by the Duchess of Medinaceli as thanks for the town’s tribute on the birth of her son. However there is a local legend which suggests that the image was actually intended for the Duchess in Dénia but, after several attempts, it couldn’t be carried across or around the Cabo de San Antonio headland and thus this was interpreted as a sign that the destiny of the image was in Xàbia. The image was carried on the shoulders of young sailors to the church of San Bartolomé where it remained until the small Calvario shrine was completed to house the new statue three years later.

In 1834 cholera swept through the area and the population prayed to the image for salvation from the plague. There were no more deaths from cholera that year and ever since. In gratitude, the locals made improvements to the chapel of Calvario in 1847 to its present form, complete with the Arabic-style blue tiled dome and dedicated special celebrations in its honour. These celebrations gradually usurped those of San Sebastian who remains the town’s patron saint.

The original image was destroyed by the comunistas during the Spanish Civil War, engulfed in an inferno in the Placeta del Convent, but a replacement was created from a surviving photograph; this is the image we see today. In October 1967, to mark the bicentennial of the supposed gesture of the Duchess of Medinaceli, the mayor of Jávea, Don José Llidó Vicente, proposed that the image of Jesús Nazareno be named perpetual mayor and be given the baton of office “for eternity” which meant that for all religious activities involving it, no mayor would ever lead with the baton. The proposal was unanimously agreed and, to this day, the image carries the baton of office at his feet. The appointment was welcomed with great joy by the people of Jávea. After all, who better to keep them from harm than Him? There were great celebrations as the streets were decorated with flowers, flags and lanterns. There were bulls, musical performances, dancing in the streets and parades, essentially similar festivities that take place today, the largest religious celebrations in Xàbia.

For some ten months of the year it sits inside the iconic blue-domed chapel of Calvario before being carried down to the heart of the historic centre of the Third Sunday of Lent where it remains through the Easter period and into spring where festivities in its honour include bull-running, live music and theatre, flower offering and the wonderful traditional flower crosses as well as the religious acts inside the ancient church of San Bartolomé inside which the image observes. On May 3rd the people of Xàbia accompany the image back to the chapel of Calvario, lighting the way with burning candles before a thunderous firework display brings everything to a close. It might not have the colour, noise and intense activity of the Fogueres de Sant Joan but the fiesta is just as important to the life of Xabieros.

On the third Sunday of Lent the image of Jesús Nazareno is brought down from the chapel of Calvario in solemn procession to the church of San Bartolomé, where it will stay until the end of the festivities.

On Good Friday – viernes santos – the image is carried through the streets of Jávea in another emotional cavalcade to mark this significant event in the Christian calendar.

And then, in the last week of April, the festivities begin.

A full programme is normally made available from the Tourist Office in the Plaça de l’Església from mid-April, about two weeks before the start of the fiesta, and a special colour pamphlet can also be picked up from many businesses around town.

Running with the Bulls

The opening few days may not be to everyone’s liking and thus those individuals tend stay away and it is the controversial demonstration of bravery in front of heifers and bulls in a special arena of metal cages and wooden barriers. Yet it remains widely popular with a population that is still essentially rural in nature and these events are well attended.

The cages are mostly privately owned by family and friends and it is only those who may use the platforms on top, although anyone is welcome to stand in the cage below. However it’s quite common for  relative strangers to be invited up to better see the action, especially since young children are not allowed to enter the cages. This is down to safety concerns, not from the bull but from those runners escaping the charging animals as they may drive themselves forcibly between the bars to avoid the horns and many more accidents are as a result of a clash of heads than from those horns. Sometimes there is traditional music playing from the top of the cages and there is plenty of drinking and eating.

May Day and the Flower Crosses

May 1st – May Day – tends to be the day that is dedicated to children with giant inflatables, rides on traditional horse-drawn carts and mobile shows going on throughout the historic centre.

The arrival of May also sees several decorated crosses appear through the old town (a map can be picked up from the Tourist Office), many of them made from colourful flowers. Each year, the mayorales, who are residents (always male) who are selected by the drawing of lots the year before to represent the fiesta, are responsible for placing crosses outside their homes. Planning takes months; professional designers are often tasked with creating a stunning visual image to outdo others. The cost is phenomenal, usually more than 2,000 euros, and the dedication to put together such beautiful creations is admirable, although quite often neighbours muck in to help out, spending hours sticking on flowers and plants so that the cross is ready for its reveal.

On the evening of May 1st, an informal procession visits each cross in turn. In recent years, the fabulous Tuna de Xàbia have provided the music, playing a few melodies in acknowledgement to their creators who, in turn, provide suitable refreshment in the form of cakes and drink.

Anyone can join in. It usually begins at the cross which is placed outside the town hall before walking around the town, stopping at each cross, consuming a glass of mistela – or maybe something stronger – and munching on traditional sponge cake. Don’t stand by and watch. Everyone is invited to join in. And it lasts long into the evening as there can be as many as a dozen crosses placed around the town; that’s a lot of mistela and sponge cake!

May 2nd – The Flower Offering

The image of Jesús Nazareno will have been sitting in the church of San Bartolomé since his descent from the ermita del Calvario a few weeks earlier. The fiesta is all about this revered image and as the festivities draw to a close, the people of Jávea will make their offering of flowers to it, processing through the narrow streets of the historic centre, some dressed in traditional costumes, to the church in the centre of town where their bouquets will be brought together to create a wonderful and colourful montage.

The culmination of the festivities occurs on May 3rd, known as the ‘Subida de Jesús Nazareno’, and a local holiday in Xàbia. The church bells will ring across town and valley whilst the ‘despertà’ – the “wake up” – will shatter the silence of the morning with music and loud thundercrackers. A solemn Mass at midday will be in complete contrast to the ‘mascletà’ that follows it, a co-ordinated display of explosive power that is almost uniquely Valenican. There is no colour or specific shape to appreciate; it’s all about an accumulation of sound as a combination of ground and air explosions grow in intensity to the signature finale, often called the “earthquake”, which rocks the surrounding area with ear-splitting noise.

On the evening of May 3rd, the people of Jávea will gather together once again to accompany the image of Jesús Nazareno as it makes its ascent – “la subida” – back to its blue-domed home. After another celebratory Mass, the festivities are brought to a close with a fantastic firework display which lights up the night sky above the town. And then the townsfolk make their way home – and make preparations for the next year’s celebrations.

THE ORIGIN OF THE FLOWER CROSSES
The origin of such a tradition seems to be another adoption of ancient festivities by the Christian faith during the conversion of Europe. Amongst the many rituals, the festival of Flora, the Roman Goddess of flowers and the season of spring was celebrated between April 28 and May 3 and symbolized the renewal of the cycle of life after a long winter.

Such traditions were brought to the Iberian peninsula during occupation by the Romans and quite possibly adapted after the conversion of Emperor Constantine I in the 4th century and the supposed discovery of the ‘True Cross’ in Jerusalem by his mother Saint Helena. She is said to have died praying for all Christians to commemorate the day that the ‘True Cross’ was found whilst other sources suggest that the tradition celebrates the rescue of the ‘Cross’ from the Persians in 628AD.