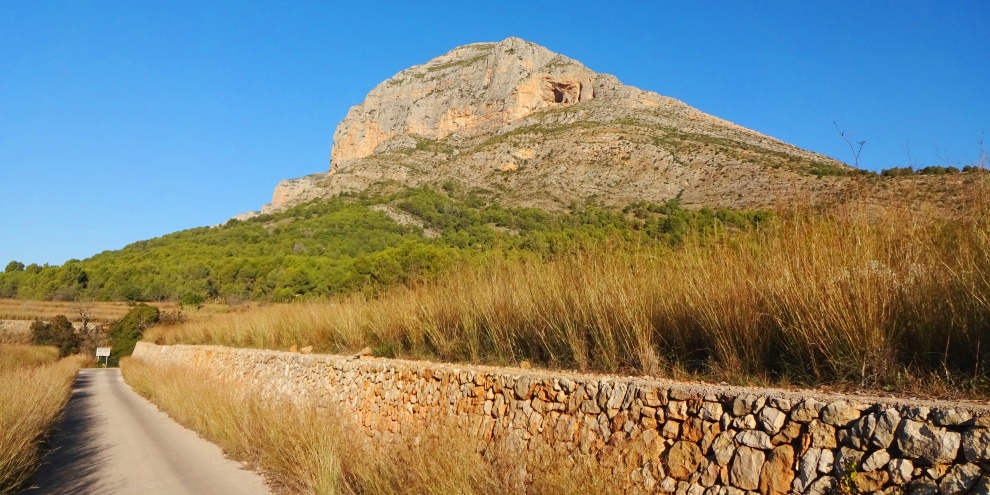 This is an extended circular walk which starts in Placeta del Convent in the historic centre and passes through the zone of Castellans right below the slopes of the majestic mountain of Montgó which appears to loom over the route at times. It then skirts around the Huertos del Montgó to head south into the valley, crossing the busy Carretera de Jesús Pobre and then very busy Carretera del Gata de Gorgos to pass through the modest industrial zone to cross the Gorgos river. Heading east, initially alongside the river, the route then crosses the busy Carretera del Benitatxell close the the Restaurante Bon Amb to head back towards the historic centre through the orange groves, crossing the river once again, to finish back in Placeta del Convent. It should take about two hours to complete, allowing for stops along the way.

The route is described in an anti-clockwise direction. From Placeta del Convent, head out of town with the traffic along Carrer Dr. Borrull, passing by the Convent and Supermercado Mas y Mas. At the end of the road there is a roundabout – it’s often known as the ‘olive tree roundabout’ – and the route turns right into Calle Jurados towards the Montgó massif; cross the road safely by the first pedestrian crossing. Continue on the left-hand side of the road as it gently rises towards the hills. To the left, partly hidden by the trees, is the Casa de Colomer (which is also known as the Casita de Don Juan Tena) which was built during the heyday of the raisin industry during 19th century.

Turn left into Camí dels Castellans and the road begins its slow ascent to the highest point of the route through the Urbanización Els Castellans. The road is very narrow in places, barely two metres between the high walls of the private properties either side, and you should always be aware of vehicles trying to get past.

As the road climbs there is a small wooden sign on the right, partly hidden in a hedge, which confirms that the route is following for a short period the early stages of the Xàbia-Camino de Santiago, part of the huge network of routes which ultimately end up in Santiago de Compostela in Galicia. The route from Xàbia to Almansa in Albacete is the 152km long Camino del Alba. At Almansa it links with the Camino de la Lana which runs north to Burgos where the route joins the traditional French way to Santiago de Compostela.

After about a kilometre of gentle climbing the route rounds a corner to reach the highest point of the route at 92m; it’s all downhill from now – more or less – to the river just over three and half kilometres away. As the road drops steeply, the mountain of Montgó appears again to the right and you’ll notice that it has changed shape from the narrow pyramid to the long elephantine sprawl with the “eye of Montgó” very prominent on the cliffs above.

Ahead and to the left the valley spreads out, extending eastwards towards the high inland mountains in the distance and south to the hills which are much closer. The road skirts along the northern edge of the Huertos del Montgó, an undeveloped square of land which has been subject to much controversy recently when developers wanted to build residential care homes on the site. At the obvious junction the route leaves the Camino del Alba to head south along Carrer Pic del Montsià to the main road of Carretera de Jesús Pobre.

On reaching the main road, turn right and stay on this side of the road for some 50m before crossing it safely to continue south into the valley along Carrer Mauritania which winds itself through the collection of villas and orchards to reach Camí Vell de Gata.

Turn right and then after just 40m turn left into Camí de les Barranquetes which runs almost dead straight, crossing the Barranc de la Hiedra which is only really determined by the number of rushes growing at the lowest part of the narrow road. The route climbs again just for a short while and soon arrives at the busy Carretera de Gata main road.

This stretch of road has seen some re-development in 2020 with two new roundabouts providing access to the crematorium/cemetery road and the industrial estate which is soon to be expanded. For safety it’s advised to turn left and walk against the traffic for some 200m to cross the road carefully at the next roundabout where there are pedestrian crossings. You could head straight down into the industrial estate but to avoid the many lorries that use this stretch, walk back to the great Artosca building and turn left into Camí Fontanelles running alongside to the right.

Follow the road for a short while to the junction with the lavibro works. Turn left into Camí les Ribes and follow the narrow tree-lined road to the next junction. Take care along this section as the construcion yards in this zone means that there are plenty of big lorries and cement trucks driving back and forth. At the end of the road, turn right into Camí de la Grava and pass alongside the works towards the river. When the road bends to the right, continue ahead through the rushes and cross the Rio Gorgos. It’s very wide here and it’s difficult to imagine a raging torrent charging along the course on the rare occasions that our region suffers storms and heavy rains. But it has done so several times recently so care should be taken if it’s been particularly wet.

After crossing the river the road climbs steadily to a junction. Turn left into Camino Cabanes and follow the narrow road, initially alongside the river bed which drops away dangerously to the left, and then through some villas to pass by the Two Michelin Star restaurant Bon Amb to arrive at the roundabout on the junction with Carretera del Benitatxell.

Skirt around the roundabout to the left – luckily you don’t have to walk on the road as there is enough room on the safe side of the kerb to stay away from the vehicles – and take the main road towards Jávea for just a few metres. You need to cross it here so take care and make use of the central reservation.

On the other side of the road lies the original route into Xàbia, the narrow Camí Pla d’En Roca which should be followed carefully as it can be a popular rat-run between the town and the roundabout. Eventually the route comes across the Río Gorgos once again and crosses the dry river bed by way of the ford; at just over 11m, this is the lowest point of our journey.

Continue following Camí de les Sortetes towards the town, taking care at the crossroads with Camí de les Sorts as traffic from the left and right has priority. The route gently climbs past Bodega Sortetes and underneath the main road and through the Plaza San Antonio; look out for the niche with the saint’s image and this rough square is where the great pine bonfire is lit each January.

On arriving in the little square, which is often called the “ferro square” due to the two iron works located around it, head across and into Carrer de la Font. Follow to the end and turn left. Continue up and across the main road and you’re back in Placeta del Convent.

“I long for the countryside. That’s where I get my calm and tranquillity – from being able to come and find a spot of green.”