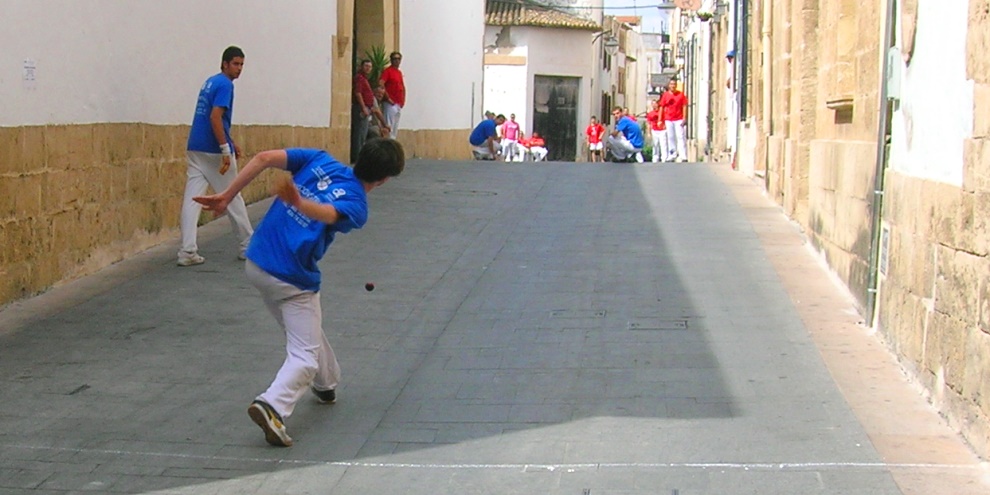 Although the exact origins of Valencian Pilota are not known, it is certainly more than six centuries old and maybe even older with some evidence that it derived from the French medieval game of ‘jeu de paume’ which was first documented in 1292.

Over the centuries, the game has evolved into what we see today: Valencian pilota and its variants – Llargues, Escala i Corda, Raspall, Galotxa and Galotxetes. It is played throughout the Comunidad Valenciana with certain areas having its own preferred variants of the game which can be played in the street or in special walled courtyards called ‘trinquets’.

There has been a marked resurgence of interest in the game in recent years and there are almost 150 ‘trinquets’ in the region, including Jávea which opened its new building next to the football ground in April 2010 but once boasted a much older trinquet which played against the remains of the old town walls; Bar Trinquet is a reminder of the former location of the town’s playing court and there are old photographs on the steps into the basement which record its former past.

The Club Pilota de Xàbia has been promoting the sport in the town for many years and runs the highly successful Escola de Pilota Xàbia which has produced some talented young players. It also organises the competitive matches that take place at the Trinquet de Xàbia in Carrer Moli Safranera in the Frechinal area of the old town.

Most weekends there are matches of all variants of the game and each year the TV cameras visit Jávea to transmit live one of the regional league games of ‘escala i corda’.

In addition there are number of games throughout the year which take place in the streets of the town, the traditional venue for many of the variants, and you might find matches being played in Carrer Sor María Gallard next to the indoor market on a Sunday morning whilst during the port fiesta in August / September there is normally amateur and professional games played in Carrer Virgen de Loreto.

However the curious onlooker should beware; those little leather balls are harder than they look and good players can propel them at great speed so keep a close eye on the game!

Look out for the posters that appear around town during the week, advertising the next games at the Trinquet de Xàbia. Non-members are welcome to attend and the club makes everyone very welcome, even if they appear at first to be slightly bemused by your presence. For professional games, there is normally a small charge.

This is the most popular game which is one of two variants that is played professionally. The court, which could be anywhere between 45 and 60m in length, is divided into two by a net at a height of 1.8m and the 42g ball, which is made of wood and covered with leather, is hit over the net by the palm of the hand between the two teams, one normally dressed in blue and the other in red, the latter being considered the better team.

This variant of pilota is just over 100 years old and has become the most prestigious of all the variants of the game. The object of the game is not only to hit the ball over the net – the ‘corda’ – with the hand but also to make it as unplayable as possible in order to prevent the opposition team from returning it. Amongst other methods, this could be achieved by hitting the ball as hard as possible to land in the spectator gallery at the opposite end of the court.

Games are divided into four ‘quinzes’ – 15, 30, ‘val’ and ‘joc’ – with the winner of each game winning five points. The first team to reach 60 points is the winner.

There are a number of areas to watch the game. The bravest sit in the ‘llotgeta’ which is a small enclosure at one end of the court next to the ‘dau’ where the served ball is received at the beginning of each game. Even braver still are the select few who are invited to sit underneath the net in the middle of the court. Most aficionados prefer to sit on the steps along one side of the court – the ‘escala’ – where they have to keep a careful eye on the ball. The more prudent sit in the galleries high up above the court at each end.

This is the oldest variant and is very common in the northern part of the Province of Alicante. It is normally played in a long street of up to 70 metres in length by two teams of 3, 4 or 5 players, one dressed in blue shirts, the other – the favourites – dressed in red shirts. The teams hit the small ball weighing around 39g at each other in an attempt to launch it beyond an imaginary line which changes each game. The ball must be returned when it’s in the air or after the first bounce off the ground.

Scoring is achieved by hitting the ball beyond a boundary at the end of the street or by forcing the opposition to fault, either by making the ball bounce twice before they can return it or forcing a player to touch the ball twice. A number of lines are chalked on the floor or special signals placed by the referee during the progress of the match which are important to the scoring.

Games are divided into four ‘quinzes’ – 15, 30, ‘val’ and ‘joc’ – with the winner of each game winning a point. The first team to reach a predetermined score (usually ten points) wins the game.

Raspall’ can be played in a ‘trinquet’ or in the street (with some minor rule changes) and is the other variant to have professional players. Two teams throw the ball between each other with the aim of making it unplayable for the opposition players.

There are two halves to the playing area called the ‘serving’ and the ‘receiving’ fields although there is nothing to determine the boundary between these two halves. Irregularities such as balconies, doorways, street signs and gutters can be used to try and trap the ball and make it unplayable.

At each end of the playing area, there are the ‘fault lines’ past which the opposition team is trying to propel the ball; if it bounces on the ground beyond this line, the opposition team wins a ‘quinze’ – 15, 30, ‘val’ and ‘joc’ – and the aim of the game is to win five ‘jocs’ to claim the match. (In a trinquet, these fault area would be the ‘llotgeta’ and ‘galleries’.)