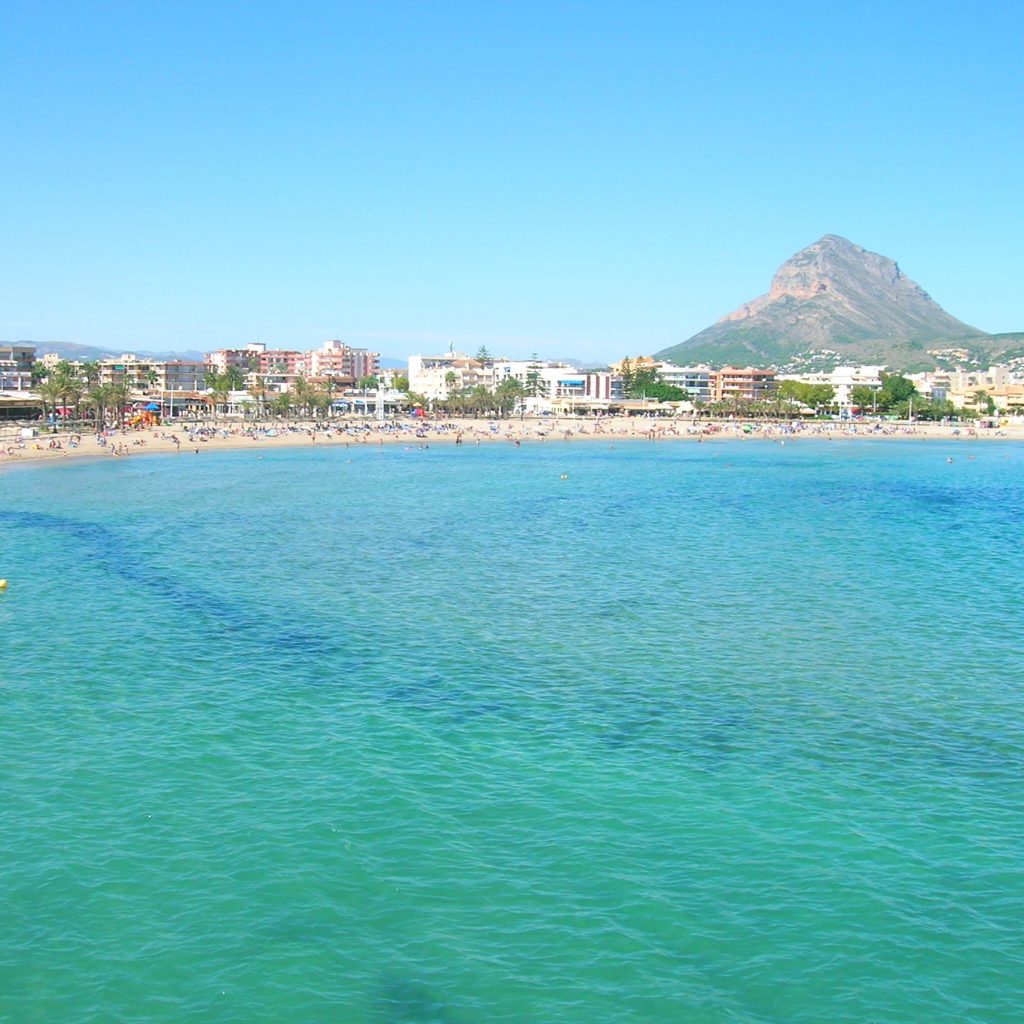 The Arenal is the holiday zone of Xàbia with its crescent of golden sand, one of the town’s three Blue Flag status beaches, lined with lively bars and restaurants along its wide promenade. It’s the main tourist centre of the town and consequently one of the busiest, especially during the hot summer months when the fun extends right through to dawn. The shallow waters make it a perfect place for all the family to enjoy the Mediterranean whilst the restaurants offer something for all tastes.

It has been said that in years gone by, the sons inherited the fertile soils of the valley inland whilst the daughters were given the less-productive salty flatlands next to the sea. She who laughs last …

Click here for our directory of restaurants and bars in Jávea which includes several quality options in the Arenal.

Parking can be a nightmare during the summer months but there is plenty of space to leave the car if you’re willing to walk. There are three main car-parks along the front, the largest of which is at the southern end as is known as the ‘Mas y Mas car park’ due to its proximity to the supermarket. But all of these car-parks plus the bays along Avenida de la Libertat behind the bars and restaurants get full very quickly during the summer so your best option is to park in one of the wide streets away from the front-line.

There are two paid car-parks just a few minutes’ walk from the beach:

The town hall has set up two drop off zones at either end of the promenade so that you can drop off the family and beach stuff and then head off to park the car. If you can accept that you’ll have to walk a few minutes’ more, there is always plenty of parking available, even in the summer months, in Calle Niza, Avenida Bruselas, Avenida Etrasburgo and Carrer La Haya, about 300-500m inland.

Be very aware that the local authorities will not hesitate to remove a vehicle which is illegally parked, especially on the roundabouts when it can restrict movement by the local buses.

The office will be able to provide advice of what to do and see in Xàbia whilst it also offers maps and brochures. The staff speak many languages, including English.

The sandy beach extends some 500m in a long curve from the mouth of the Fontana Canal. It is one of the town’s prestigious Blue Flag beaches. It’s probably the most popular with families, given that it’s the only sand beach in the town and that the sea remains fairly shallow for some distance from the shore.

During the summer months, there are a number of parasols and sunbeds for hire as well as pedalos, jet skis, water bikes, etc. and a floating platform secured about 100m out in the small bay. Available throughout the year are the volleyball nets, basketball hoops and children’s play areas.

In 2013 the promenade which flanks the sandy beach was renamed in honour of one of Xàbia’s favourite sons, the tennis player David Ferrer in a special ceremony not long after it had been renovated.

The promenade is lined with restaurants, bars, cafeterias, beach shops and nightspots and is very popular all year round. During the summer, there is a street market running the length of promenade offering a wide range of hand-crafted items whilst street theatre has recently been added to the attractions of the Arenal.

During the summer, the Council lays on a great family event, the Beach Cinema when a large screen is installed on the sand onto which many summer blockbusters and classic family movies are screened once the sun drops below the horizon. It’s free and the films are normally in Spanish with English subtitles. All you need to bring are chairs or a blanket and some drinks and snacks.

Click here for our directory of restaurants and bars in Jávea which includes several quality options in the Arenal.

At the southern end of promenade, at the top of a flight of steps, is the viewpoint known as Punta del Arenal. As its names suggests, this location offers a great view to the north across the little bay of the Arenal beach towards the mountain of Montgó and the long headland of San Antonio which extends into the sea.

To the left of this flight of steps, there is a path which follows the very edge of the rocks before the viewpoint, just a few metres above the sea. There are short but steep climbs across the rocks (a wooden handrail has recently been placed to assist) before the path emerges onto the wide rocky shore, the remnants of a sandback fossilied many hundreds of thousands of years ago. This is a popular place for fishing. Be warned, jumping from these rocks is strictly prohibited and too many of those who have ignored the warnings have ended up in hospital with broken bodies.

Just behind the viewpoint is Edificio Torre del Castello, one of just two buildings more than four storeys high in Xàbia, built before height restrictions were put in place by the Council. As its names suggests, there used to be a castle overlooking this little bay but it’s long gone in the face of the surge in the tourist industry and the demand for accommodation. Just a few remains lie in its gardens at the rear, virtually unknown by its occupants whilst its cannons now lie around the church of San Bartolomé in the heart of the historic centre.

At the northern end of the Arenal bay, behind the splendid Parador Hotel and on the other side of the mouth of the Fontana Canal, are the remains of a fish factory used by the Romans when they settled in the area.

Sadly, a large chalet and landscaped gardens were built on this promontory in the early 60s for Government minister Mariano Navarro before its archaeological importance was properly realised. In addition, the site was plundered for many years by antiquities collectors as well as workers cutting stone blocks out of the tosca to be used in local buildings.

The site consists of a large basin synonymous with ancient salting factories found along the southern coast of the Iberian peninsula and along the northern coast of Africa. The bridges across the basin are not Roman but are modern additions.

Fish caught in traps along the coast would be brought to this basin and salt would be added. This salt was created by the low plain just inland from the Arenal being flooded with sea water, a task assisted by the channels of Séquia de la Nòria. The water would evaporate, leaving the salt deposits. This area is still known as ‘Saladar’ which means salt flat or salt marsh, eluding to its ancient role.

Walking to the very end of the site provides a great view of the Arenal beach.

Visiting
The Beaches
The Viewpoints

What’s On Guide
Link to What’s On Events Calendar