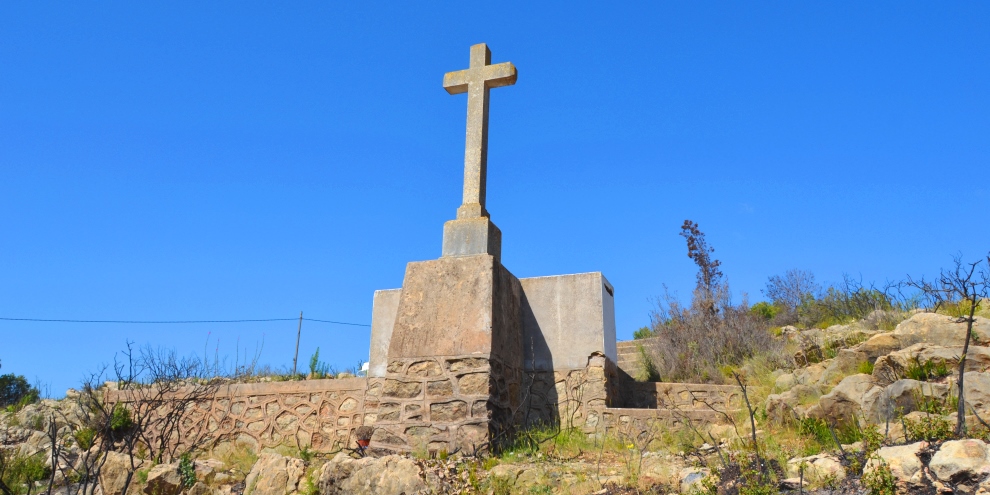 Once hidden amongst trees just a few hundred metres from the mountain road linking Xàbia and Dénia, a tall stone cross marks the location of a macabre tale in the modern history of the region: the story that became known as “The Night of the Abyss”.

At the outbreak of the war, the Marina Alta region, including Xàbia, lay in territory loyal to the Republican cause. After the fateful coup of July of that year, which aimed to overthrow the Second Spanish Republic but instead drove the country into the tragedy of civil war, Nationalist troops quickly took control of around one third of Spain and within four months General Francisco Franco was confident enough to declare himself head of state and Generalísimo. By November, the Republican government had fled Madrid and based itself in Valencia.

As Nationalist forces battled to take Madrid, reprisals, many uncontrolled and unusually violent, took place in Republican territories and the Marina Alta did not escape. Extremists took their targets to remote areas where they could be killed and their bodies deposited, never to be found. Prominent people with Nationalist sympathies were targeted but so were innocents with no obvious political leaning in acts that would be considered as uncontrolled personal revenge, pitting neighbour against neighbour.

On the night of November 2nd 1936, a collection of unfortunates from Dénia including land-owners, lawyers, businessmen, farmers and even students, were taken up on to La Plana and lined up above the opening of a deep chasm just above the Barranco de Fondo, located just 130m from the junction with the road to the end of Cap de Sant Antoni.

They were shot, their bodies thrown into a natural chasm almost 70 metres deep known as ‘L’Avenc de Xàbia’. Some reports suggest that at least three victims were still alive, having survived the gunshots and the fall but, with no chance of ever escaping the abyss, they succumbed to the inevitable.

The perpetrators were left-wing militant unionists, most from the CNT, a confederation of anarchic-syndicalist labour unions which supported the Republican side of the Spanish Civil War.

After the end of the Civil War in April 1939, the abyss was sealed and turned into a natural tomb, a cross erected with a plaque dedicated to those who had been murdered. (Numbers range from 13-21 but it is now thought to be 15.) It remained closed until July 18th 1953 when a team of cavers from Alcoy broke through the reinforced concrete slab that covered the abyss and descended into the darkness. They discovered human remains along with animal bones as well as a shotgun, shoes and other objects, some of which were brought back to the surface.

Sixty years later, cavers from Xàbia made the descent along with municipal archaeologist Joaquim Bolufer and journalist Eduard Torres and they found bones, tattered clothing, shoes and other remains buried under stones. They returned to the surface and sealed the abyss once again.

The cross has remained more or less unknown to many, visited faithfully by relatives and friends who came to lay flowers against the stone. And then the devastating fire of September 2014 destroyed the trees behind which the cross stood for many decades out of sight from passers-by and it can now been seen from the road.

The cross can be easily reached on foot from the junction of Carretera de Dénia with Carretera del Cap de Sant Antoni. There is space to leave a car parked safely by the side of the road and a narrow path leads off south (back towards Xàbia), marked irregularly by stones painted white, for about 200m to the cross.

By all means, visit the cross and stare in silence at what mankind can do to each other under certain circumstances. Respect the site for what it is, a memorial marking a tomb where unfortunates who seemingly did nothing wrong other than be on the wrong side of a conflict that tore a nation apart were murdered.