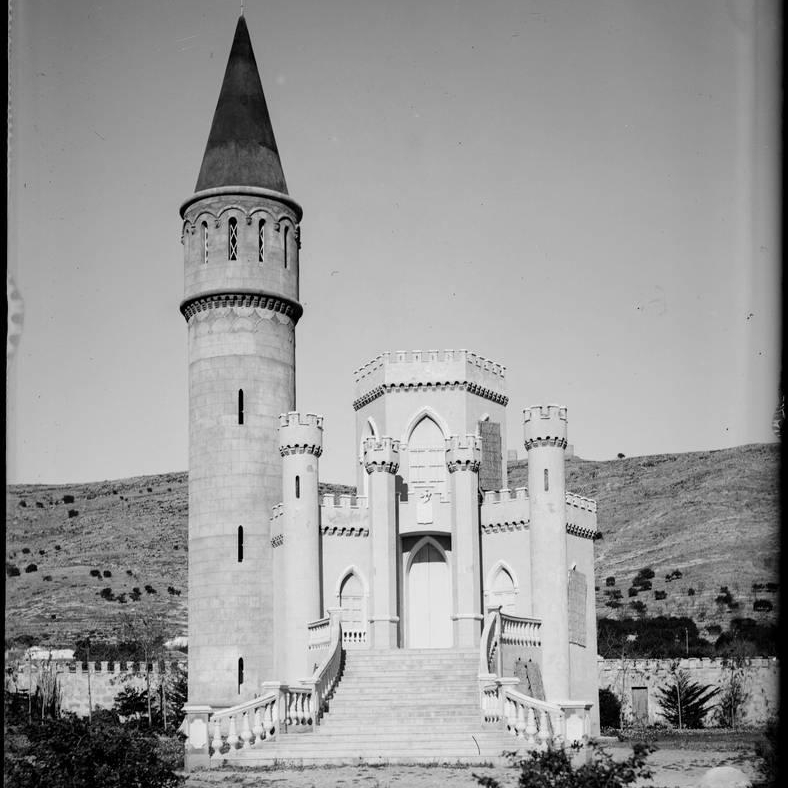 It goes without saying that the main road between the town and the port was not as built up as it is now. Once free of the grand mansions that still to this day stand either side of the wide avenue in an area where once stood the gate of Portal de la Mar, the road passed through fields of dead straight lines of vines, grapes growing in the abundance that would be scalded and dried to create the humble raisin that provided a great income to Xàbia during the 19th century. Estate houses and riuraus stood between these vines as did a remarkable building, now long disappeared, a late-Gothic flamboyant villa known as the Barony Tower of Casa Ferrándiz.

The Barony of the House of Ferrándiz was created in 1804 by Carlos IV and awarded to Jaime Ferrándiz Fornet, a nobleman from Albaida Valencia. After lying dormant for some years, the title was re-established in 1916 with María Carmen Ferrándiz Catalá becoming Baroness. Her family was deeply engaged into the new bourgeois social class that emerged in the 19th century who had the wealth to support their alleged nobility, a prosperity that needed to be displayed.

In the late 19th century, the Countess of Ripaldi commissioned the building of the Palacio de Ripaldi on the northern bank of the river Turia in Valencia, a grand building reminiscent of the castles of the Lloire Valley in France. A smaller imitation was constructed in Albaida by local wealthy businessman Bruno Soler and was known as Torre dels Brunos. In 1916, the new Baroness of the House Ferrándiz, who lived in Albaida, must have considered both palaces to be perfect extravagances to demonstrate wealth and proposed to build her own.

With links to Xàbia on her mother’s side, the Baroness spent time in the town, and it was during the 1920s that one of Xàbia’s most striking architectural pieces was created, a neo-Gothic villa with pointed doors, windows, small round towers, battlements and a high round tower with arrow slits and pointed roof reaching high up into the blue sky. A perfect extravagance for the Baroness.

The castle survived a civil war and dramatic flooding before being disappearing under the urban sprawl in the late 1970s and the only evidence of it ever having existed are a few photos and the name of a short road that leads off the thoroughfare opposite where there is now Bar L’Avinguda: the road is called Camí Castellet.

Both the Palacio de Ripalda and the Torre dels Brunos have also suffered at the hands of modern development, demolished in 1967 and 2010 respectively.