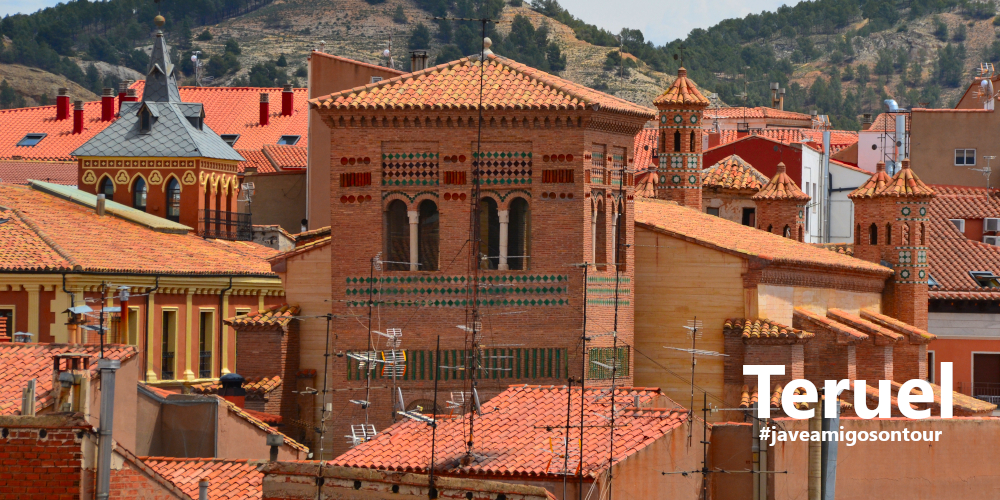 Teruel lies in the south of the autonomous community of Aragón, a city of around 35,600 inhabitants, making it the least populated provincial capital in Spain. At over 900 metres above sea level, it is also one of the most remote and still now, in the 21st century, remains the only provincial capital without a direct road or rail link to the capital Madrid. And that probably lends to its charm as a fantastic destination for a weekend away to enjoy both its Moorish-influenced architecture and its lively and somewhat unique nightlife.

Teruel is a 2hr 45min drive from Xàbia, using the AP-7 north to skirt around Valencia, and then the A-23 inland towards Zaragoza. It’s an easy drive on motorway almost all the way passing through some great landscapes – and especially easy on the pocket as there are no tolls to pay.

There are several options for a weekend stay, including several modern hotel complexes outside the historic quarter. However, we opted to stay right in the heart of old Teruel, close to the Jewish quarter, just a few minutes’ walk from Plaza del Torico with its expansive choice of restaurants and bars.

We chose a two-bedroom apartment in Calle Bartolomé Esteban which was in a perfect location to explore the historic side of Teruel plus it had its own parking so we didn’t have to leave our car in one of the parking areas outside the centre and walk in. (Be warned: the garage is not very big and larger vehicles might not be able to access it. It was tight enough with a 2001 Renault Scenic.)

The owners were very friendly and keen to show off their city with plenty of information offered to ensure that we saw as much as possible. The apartment was very clean, it had a decent WiFi and a kitchen (which we didn’t use, but was handy for storing goodies and drinks).

There is so much to see in Teruel. The Islamic influence is everywhere – the Mudéjar style – which has been recognised by UNESCO and the city is renowned for it with ornate towers, churches and a stunningly colourful cathedral. However, there are also a number of Modernist-Art Nouveau buildings which have been clearly inspired by the famous Spanish architect Antoni Gaudí.

For our weekend, we had a list of places we wanted to see and we’ll describe them below. We referred to a very useful brochure (available in PDF format) produced by the Teruel Tourist Information Office which you can use to plan your trip.

The heart of Teruel is the Plaza del Torico which is lined with shops, bars and restaurants and the meeting place for its inhabitants. In the middle is a fountain with a tall column known as ‘El Torico’ at the top of which there is a small statue of a bull. Both this square and the bull are important in the history of Teruel as it is said that Alfonso II of Aragón and the Earl of Barcelona founded the city here in 1171, a point where a bull was spotted above which shone a single star. Both appear on the city’s coat of arms.

On the eastern side of the square are the Casa La Madrileña and Casa El Torico, two of the finest examples of Modernist buildings in the city.

To the south, there is the entrance to visit the Medieval Cisterns, grand underground caverns built to collect water for the city. It’s worth a visit to see how the city was supplied with water, although walking on the glass panels above the cisterns can be unnerving!

Passing through a corridor to the south-east of the Plaza del Torico is the Torre de San Pedro and the church of the same name next to which is a mausoleum which is one of the prime attractions of the city for it allegedly contains the mummified remains of the “lovers of Teruel”. The Mausoleo de los Amantes features an interesting exhibition tour which outlines the political and cultural background to the story, the tale itself (see the link below), the sources of inspiration throughout history, and the resting place themselves, which you can visit close up under strict supervision – and no touching!

Walking south away from Plaza del Torico is the Torre del Salvador, a 14th century 40m high construction that straddles the road, one of the city’s famous Mudéjar towers which served as both watchtower and belfry; its bells still ring today. You can climb the 122 steps to the top, learning about Mudéjar art in Teruel during the ascent in three exhibition rooms. From the belfry, there are great views in all directions.

To the south of the tower, the city opens up along the narrow Plaza del Óvalo from where descends one of the most striking features of Teruel which is just 100 years old; the grand staircase of Óvalo. Walking down the steps, there is a mural depicting the lovers of Teruel below the town’s coat of arms, which is complete with the bull and the star. When you get to the bottom, turn around and look back up the staircase. And if you don’t fancy climbing them back up to the square, there is a lift to the left side of the steps.

The Walls, the Gates and the Aqueduct

To the north of the historic centre, there remains a short stretch of city wall, just over 50m from the Torre de Lombardera to the Puerta de la Traición, the Traitor’s Gate, as well as a short stretch of the aqueduct of Los Arcos which was built in the middle of the 16th century to improve water supply to the city. This is also where the Saturday market is held, if you want to have a nose around the stalls.

A short 5 minutes’ walk from this gate through the narrow streets is the Portal de Daroca and the another decorated tower, Torre de San Martín. The gate is important in the legend of the Teruel Lovers as it was through this entrance that Diego returned to claim the hand of his love.

This a great cafetería-bar which is part of the 3-Star Hotel Teruel Plaza, just off Plaza de San Juan. We enjoyed some very tasty and filling tapas dishes and some delightful wine to recharge the batteries for the second-half of the day.

If you love U2 then you must visit this Irish pub in Calle Ainsas, just a couple of minutes’ walk from Plaza del Torico. It is regarded as a temple to the Irish band, its walls covered in posters, album covers, records, and photos featuring U2; there are even the paper-mâché Big Heads from the 1992 Zoo TV tour, not the originals though. It serves a decent Guinness, plays excellent music, and stays open late at the weekends.

Located barely five minutes’ walk from the Plaza del Torico (even less from the apartment), this restaurant is renowned for its meat cooked over a wood fire. It’s a cosy place down a rather non-descript narrow street and, although its speciality is suckling pig, we went for the delicious chuletón, lamb chops and fillet steak, all washed down with some great wine. Recommended.

Another superb grill, a great find and just metres from the apartment where we were staying (or three minutes’ walk from Plaza del Torico). The modest doorway hides a rustic look inside with wooden beams and a wood fire barbecue where some excellent cuts of meat were cooked. We recommend the barbecue ribs and the grilled platter of chops, ribs, sausages, beef and much more. And they serve Turia beer, just 500m away from the river of the same name!

Located in Calle de Joaquín Costa, just a couple of minutes’ walk from Plaza del Torico, this late-night basement venue was recommended to us by the owners of the apartment we were staying in. Empty when we arrived, it soon filled up with late night revellers and had a great vibe once the band started playing. It was a great night and certainly recommended, but get their early to secure a comfortable space as it isn’t a very big basement. And don’t plan much for the next morning …

About a 40 minute drive west from Teruel is the historic town of Albarracín and, if you’re enjoying a long weekend in the city, it’s worth making the short journey out to this amazing place hidden amongst the hills.

Don’t even try to park in the town! As you approach on the A-1512, there is a large car-park on the left-hand side and it’s just a ten minute walk from here to the heart of the town. There’s no charge to park and there’s a great view of the town from the bridge next to the car-park entrance.

Albarracín is truly a unique place and offers a chance to wander through narrow streets that haven’t changed very much since Medieval times. Perhaps the most iconic image of this town in the 14th century Casa de la Julianeta and it’s almost compulsory to take a photo of its multitude of angles through the Portal de la Molina as the crowds of day-trippers clearly understand.

The Plaza Mayor is a great place to start a tour of the town and its covered arcade provides some great views of the town and of the hills surrounding it. The Cathedral is worth a visit and guided tours are available (which, it seems, are the only way of getting inside).

There’s a chance to walk off lunch by climbing up to the famous walls of Albarracín which close off the bluff at the northern end. It’s a bit of steep walk up, plenty of puff is required (and we wouldn’t recommend sandals or flip-flops) but the view over the town is worth the effort.