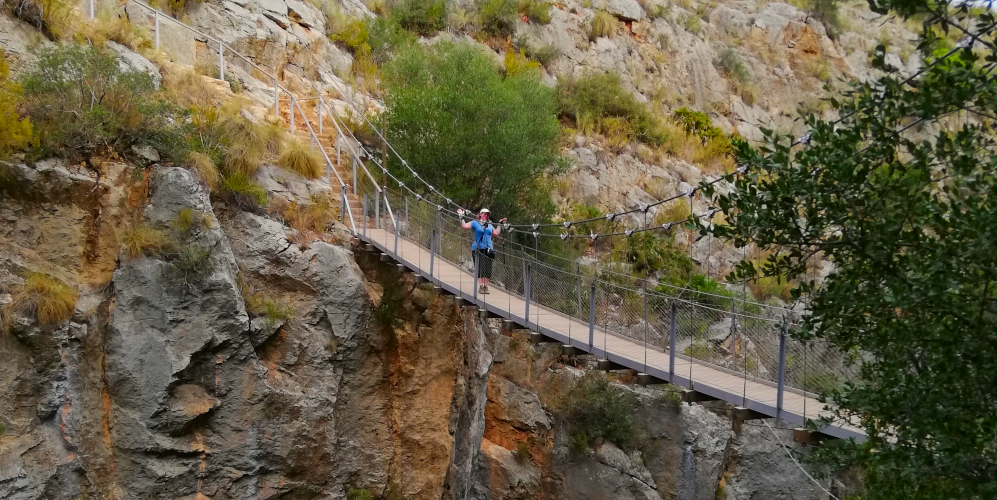 Chulilla lies some 50 kilometres inland of Valencia, one of the Valencian Community’s most beautiful villages, and one of the perfect centres for exploring history, enjoying the natural landscapes, and testing yourself with some of the finest climbs in Spain.

It is perhaps most famous for its hanging bridges – Los Puentes Colgantes – which provide a fantastic opportunity to explore the remote narrow canyon carved out of the rock by the Turia river which also provides some excellent climbing routes. There is also the Charco Azul, a calm but not always blue pool which offers a refreshing swim on those hot summer days, although you won’t be alone. There are the stunning steep 160m high limestone cliffs which offer more than 500 climbing routes, and, of course, the obligatory castle which stands guard over this passageway through the Serrano mountains.

How to get to Chulilla

Chulilla is about a two-hour drive from Xàbia, using the AP-7 north to skirt around Valencia to junction 324 where the CV-35 is followed inland for about 35-40 minutes to the exit for Losa del Obispo / Chulilla (CV-394). Chulilla is just six kilometres away from the junction.

Parking is very limited in the village itself. There are car-parks on the outskirts at either end, both of which can be very busy during the summer months, but it will all depend where you will be staying for the weekend.

We stayed in a two-bedroom apartment on the outskirts of the village, about 250m from Plaça de la Baronia, its heart of activity for bars and restaurants. We chose it mainly because of the parking – there is a free municipal car-park just metres away – but we also wanted to take advantage of its stunning views across the deep ravine and towards the village itself, its castle walls winding up the rocky bluff on which the village had developed.

The apartment was very spacious, more than enough room for the four of us, with decent-sized bedrooms, a fully-equipped kitchen, bathroom and comfortable lounge from which there was a balcony with those fantastic views. There was also free WiFi.

The block also has a duplex apartment available, a four-bedroom second-floor property with room for seven people.

The castle has its origins in the 12th Century and has undergone several significant renovations, strengthening its walls to withstand cannon shot, and later adapting it as a private residence and then as an ecclesiastical prison. After the siege of 1839 during the Carlist Wars, it began a slow process of decline, falling into disrepair which led to its current ruined state.

The best way to access the castle is to take a slow walk through the village, an authentic medieval plan dating back some 800 years, rising slowly up the hill via the Mirador Chulilla, a viewpoint with great views down the Turia valley. Heading up to the church, built in the 16th and 17th centuries, there is a simple sign on the wall which directs the visitor to the castle entrance.

There is a steep climb up a wide path which, after about 150m, bends 180° to the left to pass through the main gate of the castle. As you climb up the side of the hill, there are great views over the village and beyond. Right at the end, which appears to be the main living quarters, there are a couple of huge windows which provide an exhilarating view over the deep canyon below; but it’s not one for those who might be less than comfortable with heights and certainly keep young children well away for there is a steep drop to the floor of the canyon.

There are several recommended routes to reach Chulilla’s acclaimed Charco Azul. We chose to drive to a parking area to the south of the village (N 39°39’12.5″ W 0°53’31.1″) and follow the SL-CV 74 path for just over two kilometres along the bottom of the impressive Turia canyon. It’s a well-trodden track with a series of small low bridges that cross the river at many points, the impressive limestone walls towering above on either side.

Depending on your speed – there are always places to stop and take photographs – the path ends at the Charco Azul after about 45-60 minutes. The guidebooks tell of its stunning clear turquoise blue waters. We visited on a clear and sunny day in early September; sadly, the water was neither clear nor was it anything approximately close to turquoise blue. However, it was worth the effort nevertheless to arrive at a relatively isolated spot and explore the water’s edge as much as we could.

The guidebooks also tell of a remarkable adrenaline-fuelled walk on a narrow rickety wooden walkway precariously hanging from one of its steep rock walls, just centimetres above the water’s surface, and there are recent photos to prove it. Sadly, again, the reality was that the walkway was in such as poor state of repair that it was securely closed off to access. As we looked along its route, several wooden planks had collapsed, dipping into the waters just below. Maybe the local council will do some renovation work for the walkway formed part of the stunning route which workmen working on the nearby reservoir would take.

The return was via the same route, back to the parking. Overall, the walk is definitely recommended as a pre-lunch meander along the canyon floor. The Charco Azul might not be quite as expected but it still worth making the effort to visit.

When the nearby Loriguilla reservoir was built in the 1950s, two suspended bridges were built above the narrow Turia gorge – also known as Hoces del Río Turia – to provide a quicker route for workers staying in Chulilla to travel to and from the site. Although the originals were swept away in a catastrophic flood in 1957, these replicas were constructed in 2013 and have become a popular tourist attraction in the region.

One could walk from the village but the easiest way to access the start of the route is to drive to a designated parking zone just a few minutes outside the village (N 39°40’15.7″N W 0°53’21.6″) which is where we started our walk.

The route is clearly signposted on a wide path – not suitable for the wheels of a pram or buggy though – which soon skirts around the edge of a deep gorge before a steep set of steps cut into the rock leads one down to the first bridge, the highest at 15 metres above the river and just over 20 metres long. The bridge gently moves as you cross but they say it’s perfectly safe as it’s supported by thick steel cables anchored securely to the rock on either side.

The path descends steeply just after this first bridge – care should be taken not to slip on the polished rock – and then the path runs alongside the river to the second bridge, much lower at just over 5 metres above the water but longer at over 28 metres. Once across the other side, the path runs underneath the steep cliffs and you might hear voices of fearless climbers clinging to the vertical surface with just the help of a thin rope and a bagful of chalk.

After the second bridge, there are the remains of the chapel of San José, built by lumberjacks but barely discernible amongst the rock and dusty tracks that lead to the popular climbing routes.

Eventually the route emerges at the industrial end of the gorge, the huge dam of the Loriguilla reservoir, opened in 1967 to provide water for irrigation and for the production of electricity.

Return via the same route. It should take around 2.5-3 hours to complete, perfect for a morning stroll before lunch.

For those who want a bit of a challenge, there is a 12 kilometre circular route, known as the PR-CV 77, which links together the Charco Azul, the hanging bridges, the reservoir, and the rock paintings of Barranco de Falfiguera, located about two kilometres south of the village, which should take about 4 hours 30 minutes to 5 hours to cover.

For climbers, the vertical and slightly overhanging cliffs around Chulilla are regarded as some of the best in Spain, perhaps even the world, with many of its more than 500 routes ranging from the low 6s to the mid to high 8s. The sheer amount of hard routes is one of its attractions and it’s recommended only for strong, confident climbers; others can satisfy themselves with belaying the rest.

Located just off the Plaça de la Baronia, this is a great bar-caféteria where we were presented with the longest bocadillo we’d seen (outside of fiestas) and we were quite grateful that the waitress recommended against us ordering a large one each (us having not seen how big it actually was)! Very tasty food, nice beer and great value for money. A perfect place for lunch. And we returned for pre-dinner drinks one evening.

Located in the main square, this restaurant was very popular when we visited and we think it’s because it offers such a wide range of delicious roasted and grilled food.

Another great place located in the main square, it seemed one of the more popular places amongst the local for drinks and snacks. We enjoyed some very tasty bocadillos on our final evening.

WHAT WE THOUGHT OF CHULILLA

We stayed two nights in Chulilla and we absolutely loved it, so much so that we can’t wait to go back and explore the narrow streets of the village a little more. It’s perfect for families, friends and couples. There’s plenty to do and lots to explore.