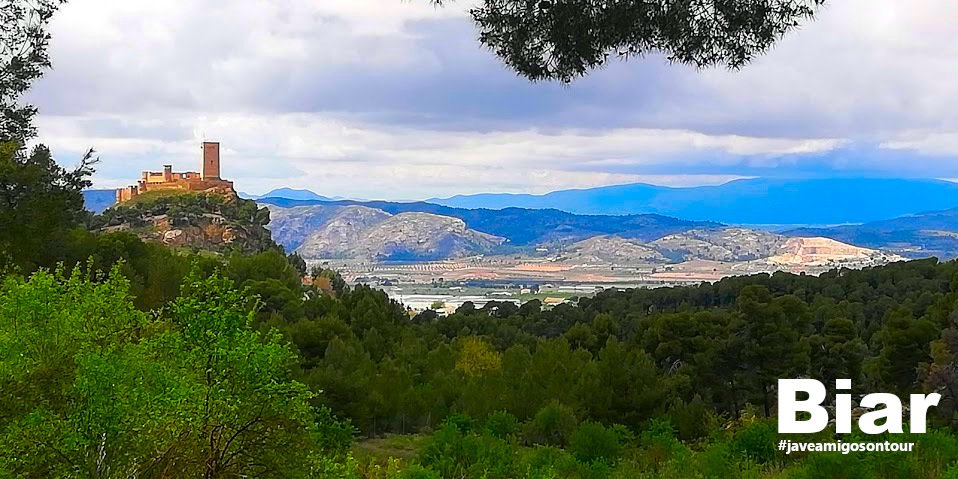 Biar is a typical inland town in the Valencian region, a collection of narrow streets, steep staircases and delightful architecture nestling beneath an ancient castle that dominates the surrounding landscape. The castle’s lofty position, ringed by the houses of the old town, has made the view from the nearby sanctuary one of the most photographed and is extensively used by tourism agencies to promote this part of the country. And we are no exception.

Parking: There is plenty of free parking in Carrer Capitan Quiles, either side of its junction with Carrer General Azcarraga. The centre of the old part of Biar is just a few minutes’ walk up a modest but not particularly testing uphill stretch. The steep steps come later.

The centre of the old quarter is the Plaza de la Constitucion, which locals are more likely to call the Plaza del Ayuntamiento since the grand building of local government sits on one side, opposite the impressive church of Nuestra Senora de la Asuncion. It’s definitely worth popping in the latter if the doors are open. The main part is impressive enough with its wood carved alterpiece at the far end. But explore further and there is a side chapel to the right and on the opposite side of the entrance which is stunningly decorated, a mini Sistine Chapel if you will.

The main square is also the location of the tourism office should you need some guidance on what to see. Here is also a great place to consider having a bite to eat, a hotel/restaurant called La Fasana, and we enjoyed some very filling tapas dishes and refreshing drinks for barely 25 euros.

Whilst you are in this square, drop down the slope to the road below where there is a shop called Todo Hogar, stand by the corner of this store and turn around and look back towards the square. Here, there is a great photo opportunity with the belltower and the castle on the hill in the background.

For those who don’t fancy the walk up from the town, you can drive up the hill by simply following the purple signs around the hillside to gradually rise up to the car-park just below the entrance. It’s an ascent along narrow streets, thankfully one-way, but with the potential for a few surprises around each corner so a low speed is recommended.

The car-park is small with space for maybe two dozen vehicles so it’s likely to be busy during peak times and it’s probably better to park further down and walk up. Access to the castle itself is by way of a wide but often steep path which winds its way up the last few metres on the hill to the entrance. And sadly this is a far as you can get for those with prams, pushchairs as well as wheelchair users with a determination to get as high as possible. (The effort is rewarded with some stunning views over the surrounding landscape.)

Entrance to the castle itself is up a small flight of steps to enter through high wooden doors. From now on, the ground underneath is rough as the route winds its way up the last few metres to the tower. There are occasional information boards (with details also in English) but many of them have long needed replacing as they have become almost unreadable. But, to be honest, there’s not a great deal to explain. This is a small and modest fortress, long abandoned and used as the town’s cemetery up until the 19th century. The real objective is the tower.

Rising across the rocky slabs (be careful in wet weather), the tower is accessed through a set of modern doors where you will be able to make your 1 euro donation towards the upkeep of this important part of local history. There are benches here inside to take a rest before the last effort, the climb to the top of the tower.

Be warned, the rise between the steps is great in many places and smaller people will certainly be grateful for the modern handrails to not only haul themselves up each flight but also provide some security on the way down.

There are three levels. The first is bare but look up for this has the amazing domed ceiling which is believed to be one of the oldest of its type in the Maghreb. Another steep set of steps brings the determined to a second smaller room with throne-like wooden chairs and an impressive cabinet. And then there is one last effort to arrive at the top. If you visit during bad weather like we did, there is a modern glass box fitted over the final flight of steps and you can just about stay out of the rain and still take in the view – if you can see it. Otherwise, in better weather, we can believe that the views in all directions will be stunning.

The castle forms part of the Route of the Vinalopo Castles, a 75km long tour which includes the castles of Biar, Villena, Banyeres de Mariola, Castalla, Sax, Elda, Petrer and Novelda. As an effective border zone between Christian and Arab forces, this part of Spain has one of the largest concentration of castles in the country.

After exploring the old quarter and the castle, and having had a bite to eat, you’re going to be looking for that iconic view. This famous photo is to be taken from the grounds of the Sanctuari de la Mare de Deu de Gracia in the hills above the town. Getting there can be a test of instinct. Google Maps will offer several routes: some of them are impossible to follow in a vehicle. So, here’s the best option.

Driving out of Biar on the CV-799 towards Castalla, you’ll come to a roundabout where the sanctuary is clearly signposted and so you take the second exit. Immediately turn right – there is a sign – and follow the narrow road of varying degrees of quality for about 200m to a junction. Here, most Sat Navs seem to want you to turn right and return to the main road. There are no signs to the sanctuary. But instinct will make you turn left and follow the bumpy road up and past what appears to be a school but is in fact an ‘albergue’. Continue to follow the road and the rear of sanctuary can be seen through the trees to the left whilst there is a pleasant place to have a picnic to the right. Continue on and bear left to find the small parking zone of the sanctuary. Leave the car and walk through the chains which bar progress with vehicles and you’ll find that spectacular view to the right.

If the doors are open, it’s also worth having a peek in the church behind you, light pouring through its grand dome.