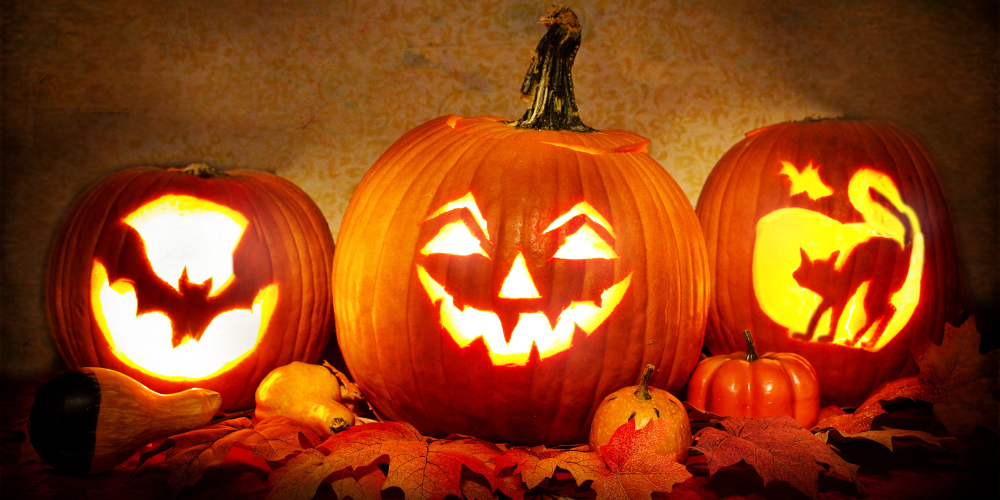 Halloween – All Hallow’s Eve – is a celebration observed across much of the world, the eve of All Hallow’s Day, known as Todos Los Santos here in Spain. In Western Christianity, Halloween marks the beginning of ‘Allhallowtide’, a three day observance to remember the dead, including saints (hallows), martyrs and all the departed that concludes with All Saints’ Day on November 2nd.

It is thought by some scholars that the festival is the Christianized version of the Celtic festival of Samhain, which marked the end of the harvest season and the start of the winter, the darkest and hardest part of the year. It was a time when it was believed that the boundary between this world and the Otherworld could be easily crossed by the spirits who needed to be appeased in order to survive the dark and harsh winter that was to come.

Developed by the early Christian church in the 9th century, All Hallow’s Eve became a time when prayers were said for all the saints as well as the recently departed souls who had yet to reach Heaven. People baked and shared soul cakes, small round cakes that were given out to the children and the poor who went from door-to-door to sing and offer prayers for souls of the deceased. Sometimes they were blessed by the local priest. The tradition continues this day in the many places of the UK, Portugal and the Philippines.

Despite the attempts by the Christian church to deter ancient pagan customs, All Hallow’s Eve was still regarded as the time when it was believed the barrier between the living and dead was temporarily broken, allowing the souls of the departed to wander the earth and seek vengeance on their enemies before moving on to the next world. In order to avoid being recognised, some of the living would wear a mask or costume to disguise their identities. Some believed that these souls could be appeased with offerings of food and drink; some unscrupulous people would impersonate the spirits and demand offerings and it is thought that this evolved into the tradition of ‘trick-or-treating’, the concept of demanding reward in exchange for good fortune.

The tradition of children going from door to door in fancy dress and given a gift dates back several centuries to the tradition of ‘guising’. In Scotland, young people went from house to house, dressed entirely in white with blackened faces, reciting rhymes and threatening to do mischief if not rewarded. To this day, it is tradition in many parts of Scotland and Ireland that children will only receive treats if they perform a party trick or tell a joke.

Although Americans are known to take the Halloween festival extremely seriously and no American town is complete without its Halloween fair or party and hordes of children wandering the streets collecting sweets and other treats, the concept of ‘trick-or-treat’ didn’t arrive in the USA until the mid-20th century.

And it wasn’t until the release of the 1982 film ‘E.T. The Extra Terrestrial’ that it became more obvious in the United Kingdom, prompting the BBC to claim that the latest American import was encouraging Britain’s youth to “make demands with menaces”.

It still divides people, some even considering it to be a form of begging and several people even admitting to closing their curtains and switching off all their lights to deter visits from trick-or-treaters. Some police forces have even issued advice on which houses to visit: “Only visit homes with Halloween decorations, and never knock on the door with a “No trick or treat” poster. Simple but effective,” said a representative of the Lancashire police. Another unwritten rule is to call it a night around the time that children would normally be going to bed after which there’s a risk that trick-or-treaters become a general nuisance to the public. Finally, tricks are off the table. In recent years, it has become an annoying habit to throw eggs at an unwilling household and supermarkets have been approached to stop selling eggs to young people during the Halloween period.

Halloween in Spain consists of two days, October 31st (‘Víspera de Todos los Santos‘ or ‘Noche de Brujas‘) and November 1st (‘Día de Todos los Santos’), the latter of which is a national holiday throughout the country. During this emotional time, families attend special masses and visit the resting place of their deceased relatives, taking fresh flowers in their honour.

The Spanish Church has recently been fighting back against the popularity of ghoulish costumes during the Halloween to promote a concept known as ‘Holywins’, encouraging kids to dress up as saints and apostles. However, you still more likely to see mini vampires, witches and ghouls passing through the streets, carrying plastic pumpkins and demanding sweets with the cry ‘Truco o Trato’!

In Galicia, there remains a strong connection with the pagan roots of the festival, resisting the North American influence which tends to devour everything, and instead continuing with a series of customs relating to nature and the harvest of crops, including the celebration of the ‘Noite dos Calacús’ (the night of the pumpkins) which involves pumpkin carving, bonfires, special rituals and fancy dress parties. The region also has a special drink called ‘Queimada’ which is a type of hot punch made from orujo blended with herbs, sugar, lemon peel, apple and coffee beans. They say that it can only be properly made whilst chanting special incantations to banish the evil spirits.

In Catalunya, many towns host the traditional ‘Castanyada’ which involves a feast of vegetables, nuts, chestnuts, and sweet bread rolls known as ‘panallets’ which are small balls of almond paste coated in pine nuts and these are sold throughout the region. In the town of Sant Feliu Sassera, some 70 kilometres north of Barcelona, its residents honour the 23 women who were sentenced to death for witchcraft during the Inquisition in the early 17th century and return to that time to remember the mysterious world of witchcraft with a special street market known as the ‘Fira de les Bruixes’ and theatrical performances.

In San Sebastian, there is the annual Horror and Fantasy Film Festival which screenings, concerts, theatrical performances and live music whilst in Alcalá de Henares, 30 kilometres east of Madrid, the night of October 31st sees the annual killer zombie march during which the living dead will invade the streets of the town.

Top Ten Most Haunted Places in Spain (according to Idealista)