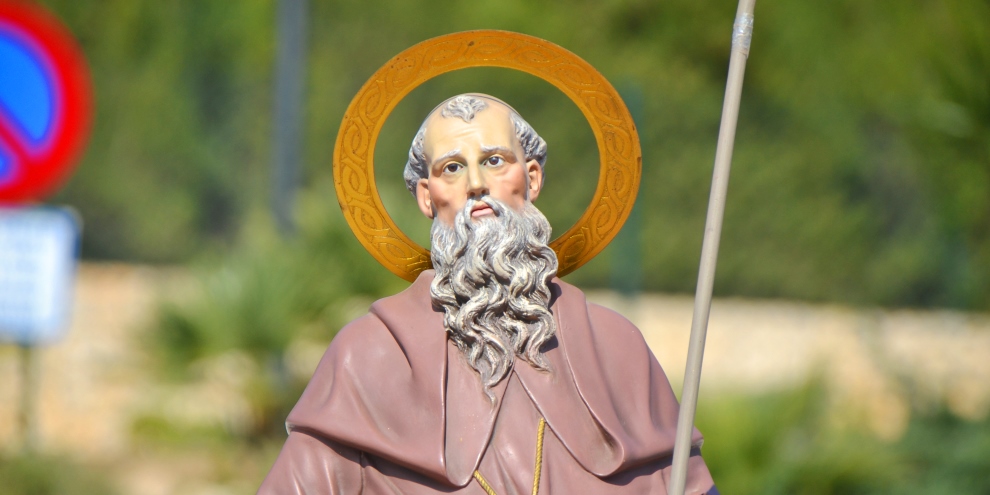 Most people will know this fiesta; it’s the one where the animals are blessed during a huge concentration of pets of all shapes and sizes in the main square in the old town. However, the festivities are so much more than a single morning’s work for the local priest for there is the traditional burning of the pine tree to warm up a chilly January evening.

The exact origin of the burning of the pine is lost in the mists of time, no doubt at some point being an important Pagan winter festival that was linked with Midwinter, celebrating the growing power of the sun after winter’s increasing darkness and chill as well as the ritual of purification as winter begins to shift towards spring. If you want to learn about a traditional Mediterranean story that seems to link fire with San Antonio, see the box at the bottom of the page.

The Burning of the Pine

By comparison with other areas in Spain and across the eastern Mediterranean area, the burning of the pine tree in Jávea is a modest affair, a ceremony that slips by almost unnoticed by most of the population.

It begins early in the morning of the weekend closest to the feast of San Antonio which is on January 17th (unless that feast day falls on a weekend then clearly it would take place on that weekend). A “despertà” – the first of the year – is the traditional wake-up call that reminds the townsfolk that they are in fiesta mode. A modest group of adherents, usually from the CAE El Tiraset equestrian group, will process through the old town accompanied by music which is often provided by the simple “dolçaina i tabalet”, the traditional Valencian instruments of a small double reed instrument similar to an oboe and a small drum. The music merely complements the thunderous cracks of the indispensable bangers that shatter the relative peace of the narrow streets, ringing of the old walls and flowing like waves through the town. Newcomers will leap out of their beds and take to social networks to deplore the practice; those more experienced will perhaps place a pillow over their ears for a few minutes or simply shrug off the cacophony of noise as part and parcel of living in the town. It is fiesta after all.

Later in the morning, members of El Tiraset will begin to prepare the special pine for the burning that evening. This begins with the dragging of a specially-prepared tree through the old town by hard-working horses; those unaware of the tradition may well sit outside the cafés and bars in surprise as the tree passes them by. The destination is a rough square to the south of the town where the shrine of San Antonio sits amidst garages and workshops; it is sometimes called ‘Plaza de San Antonio’ but few people, even locals, might know it by that name.

Throughout the day, the tree is stripped of its branches and the trunk placed upright into the ground, a process that involves much advice, plenty of wine and accompanying music. The branches are then placed around the trunk to create a tall natural pyramid of pine in the middle of the square, decorated with colourful bunting and prepared for the burning that evening.

As night falls, a crowd will have gathered around the pine tree whilst curious onlookers peer down from the main road above. It all seems quite disorganised yet several ‘festeros’ wander around the crowd dishing out cake and small plastic glasses of local sweet wine as everyone waits for bonfire. Without much warning, a string of fireworks bursts into life, an explosive fuse that flies through the darkness towards the tree which, having been doused with a suitable amount of flammable liquid, bursts into flames and the crowd begin to inch away from the heat. Sometimes there is music played as the fire roars, throwing bright orange sparks into the night sky.

Firemen are on hand to prevent the inferno from sliding out of control, spraying down the dry ground around it. Once the branches have burned away, the trunk stands alone in the darkness, defiant against the flames for as long as possible until it finally succumbs and collapses to the ground to the cheers of the crowd. As the flames die down, the crowd drifts away for dinner.

The Blessing of the Animals

The following morning , the “festeros” gather in the square. The image of San Antonio Abad is placed in the wooden cart ready for the procession through the streets of the old town and the port. The procession of animals, wooden carts and, most importantly, the image of San Antonio Abad set off on the parade, kids travelling in many of the wooden carts down the hill to the port and then back up to arrive at the large Plaza de la Constitución.

San Antonio Abad is patron of many things, including amputees, gravediggers and epileptics, but he is probably most famous as the patron saint of animals, domestic or otherwise. As the procession arrives in the square, they will find it filled with animals of all shapes and sizes, from dogs and cats through to birds and insects to horses and snakes, all waiting patiently if a little noisily for the annual blessing by the town’s priest.

Blessing in the Port

This is a fiesta that is divided into two distinct parts. Whilst the events in the town are probably those which are best known – and maybe even best attended – there are special celebrations in the port zone on January 17th, the feast day of San Antonio Abad which are organised by Penya La Burrera.

There is also a special month-long funfair, normally located in Avenida Palmela opposite Mercadona, which is known as the ‘Porrat I Fira de Sant Antonio’, a ‘porrat’ being a traditional Valencian celebration which originates to those working in the field honouring the saints to ensure good harvests and the fertility of their working animals and thus the celebrations which are held in the port and old town. The funfair is popular and has a special evening with special prices.

A Mediterranean Tale
There was once a world without fire, the flames being contained in Hell so that the people shivered from the cold during the long winter nights, unable to speak for their teeth would chatter so. San Antonio was once a pig-herder and when he was found in the desert he had a pig that would never leave his side. On learning about the frozen lands, he went to the very door of Hell and tapped on it with his staff of birch. The demons peered out of the window, recognising the saint and refusing entry on the grounds that only sinners could enter the Inferno.

Just then the pig, always by San Antonio’s side, let out a loud grunt and scratched the door with his nose. The demons thought: “roast pork” and said that the pig may enter but the saint had to remain outside. The door opened just a little and the pig charged through the gap and created so much havoc that the demons declared that San Antonio could come in after all but only if the pig remained outside! He walked in, touched the pig with his staff which instantly grew calm and then warmed himself by the fire.

As the demons passed him by on their way to report to Lucifer about the new arrival, San Antonio tapped them on the bottom with his staff. Unamused, they told him to put it down and he laid it on the ground beside him. Just then, a young demon, excited by the arrival of a new soul, was so eager to tell Lucifer that he tripped over the staff and fell into a pile of ashes. Not recognising the saint, he seized the staff and thrust it into the fire. As he did, the pig began causing havoc once again and San Antonio proclaimed that if they wanted him to calm his pig, they had to return his staff. This they did and with one soft touch the pig was calmed.

Having reached the end of their tether, the demons demanded that San Antonio and his pig leave the Inferno and they passed through the door of Hell. Unknown to the demons, the saint’s staff was soft and dry in the middle which meant that flame could not be seen in the wood. As he reached the surface of the earth, he raised his staff and waved it above his head so that sparks flew in every direction. And from that time on, there was fire in every hearth around which people sit telling stories on those long winter nights. As for San Antonio, he and his pig returned to his simple life in the desert, having given fire to the world.

In the islands of the Balearics, where the tale appears to have originated, the fiesta is marked by locals dressed as devils and demons dancing around fires set in the streets. In Jaen in the south, up to 30 fires lit all over the city with dancing and singing fuelled by much wine and pork sausages whilst Catalonians, who often say that there is no party without fire, also mark San Antonio with fires and in La Granadella, some 25 kilometres south of Lleida, they are burnt throughout the night next to the shrine of Sant Antoni. Closer to home, the town of Canals is said to build the biggest fire of them all in honour of the saint, almost 20 metres high and 12 metres wide at the base.