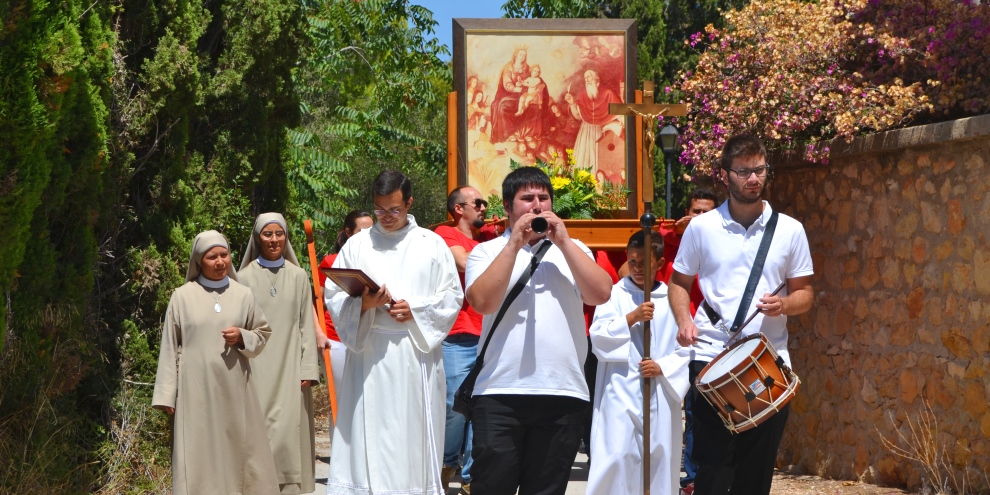 The fiestas in honor of the Virgen de los Ángeles are modest celebrations that are also known as the ‘fiestas of La Plana’ since they are centred around the sanctuary of Mare de Déu dels Àngels on La Plana.

The fiestas honour the treasured painting of the Virgin Mary which is hung inside the chapel of the sancuary but on August 2nd, the feast day of the Virgen de los Ángeles, it is carried around the plateau of La Plana. However they also testify to the great devotion that the people have for the land around them, the same land that inspired the monk to build a monastery here (see below).

The fiestas include traditional music and dancing, community dinners and dancing to a band or disco until the early hours. They not only promote fellowship amongst the neighbours of La Plana but they are open to everyone who wants to come along and become involved and maybe even learn a bit more about Xàbia than its beaches and bars.

THE STORY OF THE PAINTING
In 1375, a monastery was completed on the plateau of Cabo de San Antonio and its chapel was adorned by a beautiful canvas showing the Virgin Mary, mother of Jesus Christ, surrounded by angels with the baby Christ in her arms and the Holy Spirit next to them.

In 1388 the tranquility of the location was broken by an unexpected visit by Barbary pirates who attacked the monastery one night, scaling its walls and brutally attacking the monks, robbing the pantry and destroying regalia before their attentions turned to the chapel.

One of the monks, Brother Dimas, quickly took the painting of the Virgin Mary and rolled it up into the sleeve of his habit. After the attackers plundered the chapel and set the monastery ablaze, Brother Dimas and several other monks who survived the onslaught were tied up and led on a tortuous route down the steep flanks of the hill towards ships on the beach below.

Walking at the rear, Brother Dimas took advantage of his escort who had strolled forward to talk to a colleague and slid the rolled up painting into the hollow trunk of a nearby tree. As they continued on their descent, Brother Dimas had grown so tired of the abuse that his Abbot was receiving from their captors that he lunged at one of the escorts and pushed him into an abyss which has become known as ‘El Passet del Frare’.

Of the nine monks taken hostage, eight were released after a ransom was paid. The ninth – Brother Dimas – was executed, his captors hanging him by the neck from the mainmast of their ship. He had no opportunity to tell his brethren that he’d managed to save the treasured painting of the Virgin Mary.

The monks were now fearful for their safety on the exposed plateau and the Duke of Gandía gave them a new site to build a new monastery away from the coast and the Monastery of Sant Jeroni de Cotalba was established in 1388. It is still there, although the monks moved out in 1835 when the buildings had to be sold to pay off a state debt. Now protected and under renovation, guided tours are available and very much recommended.

In the latter stages of the 17th century, some hunters were chasing a rabbit through the ruins of the old monastery on La Plana when they stumbled across a fallen tree, half hidden by weeds and debris. Inside the trunk they found a canvas carefully rolled up and intact despite the passage of time and the weather. It was the treasured painting of the Virgin Mary.

A small chapel was built dedicated to the Virgin Mary inside which the painting was hung. The building survived into the 20th century, spared destruction during the Spanish Civil War, and in 1964 a sanctuary was built in honour of Nuestro Señora de los Ángeles which was occupied by a small community of Jeronimo monks for ten years. The monks moved on but the painting remains and is honoured every August.